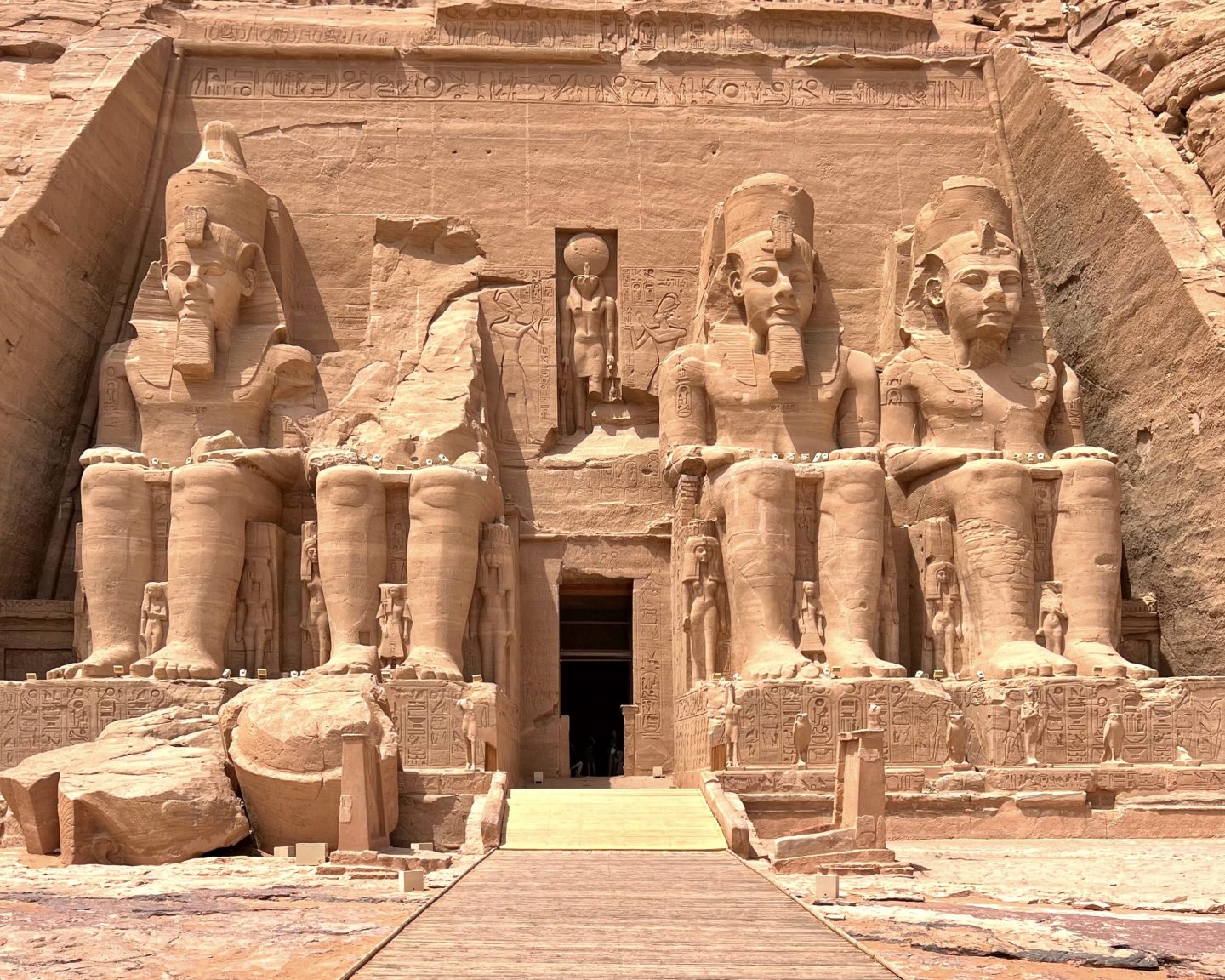 When it comes to exploring the temples of ancient Egypt, Abu Simbel is one of them that you don’t want to miss!! It is one of the most impressive archeological sites in Egypt. This was the highlight of our trip!

In this post, you will find everything you need to know for a visit to Abu Simbel. 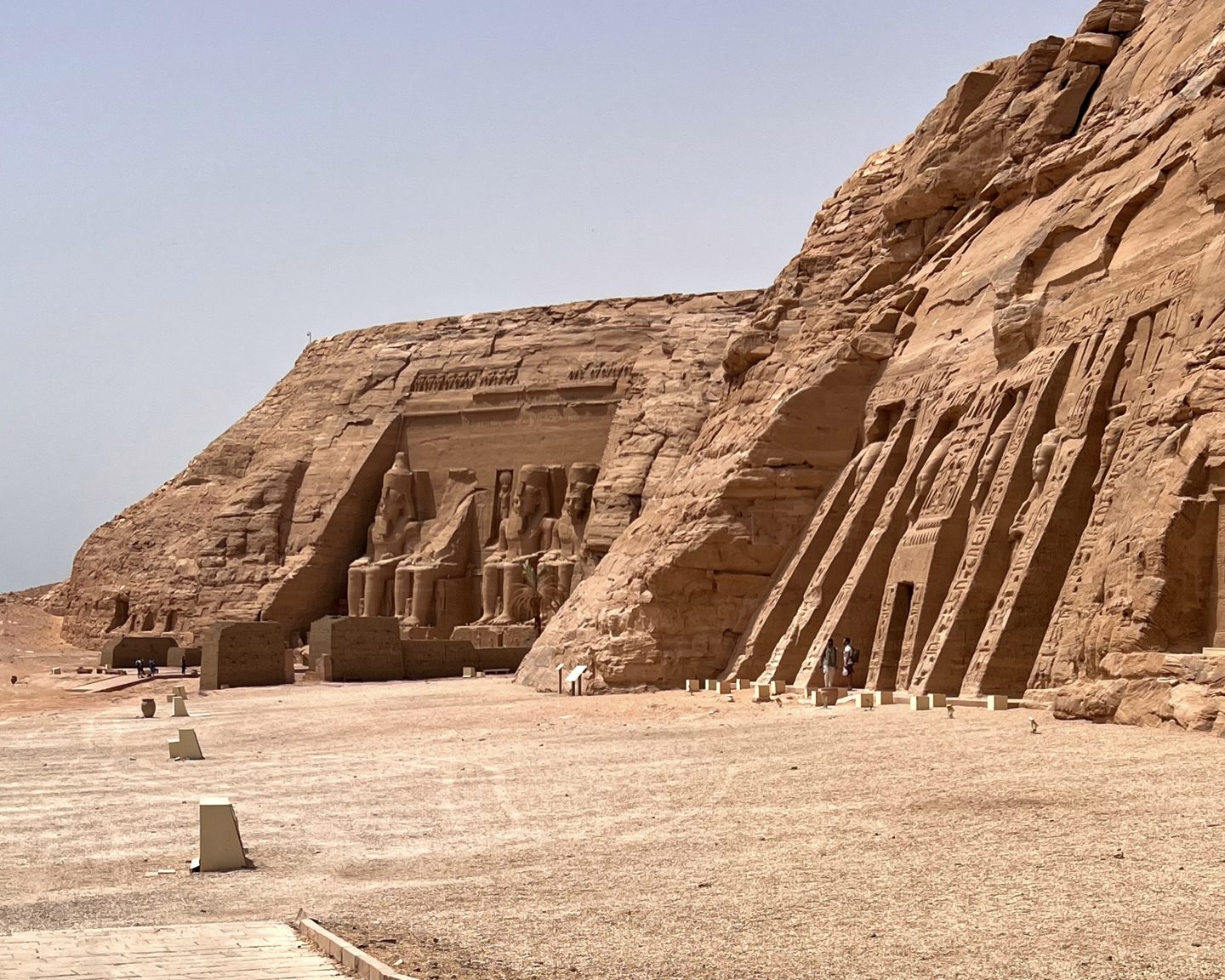 Abu Simbel is located 300 km from Aswan and only 20 km north of the border with Sudan. There are two ways to reach Abu Simbel from Aswan. The fastest way is to travel by plane with one of the direct flights between Aswan and Abu Simbel.
Another option is to travel to Abu Simbel by car, either with a private driver or as part of a tour. The temple complex is around 3 hours driving from Aswan and most tours take a total time of 8 hours, all transportation included.
Our hotel offered several tour options. We did the one where we were transported to the temple from our hotel in a private car. 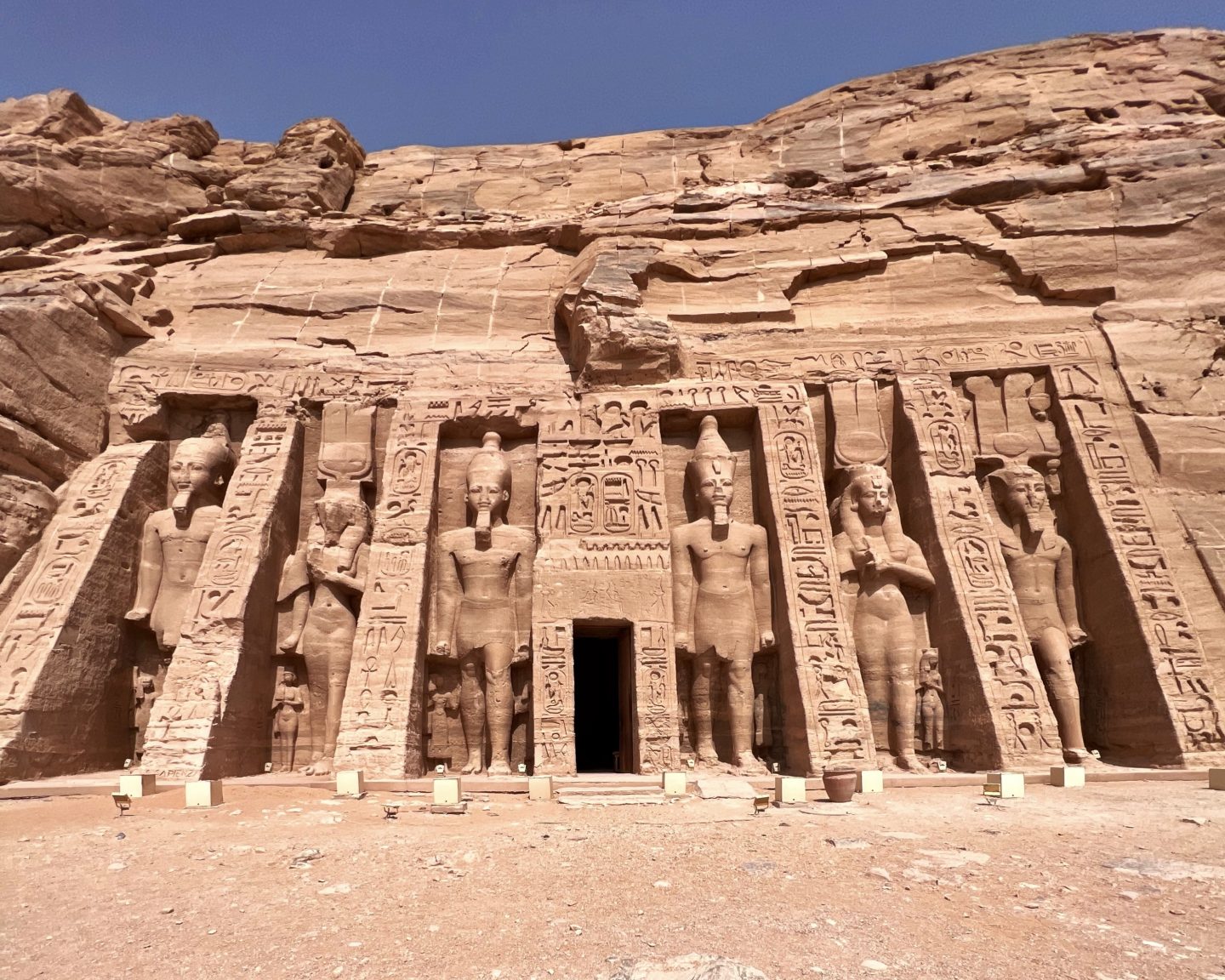 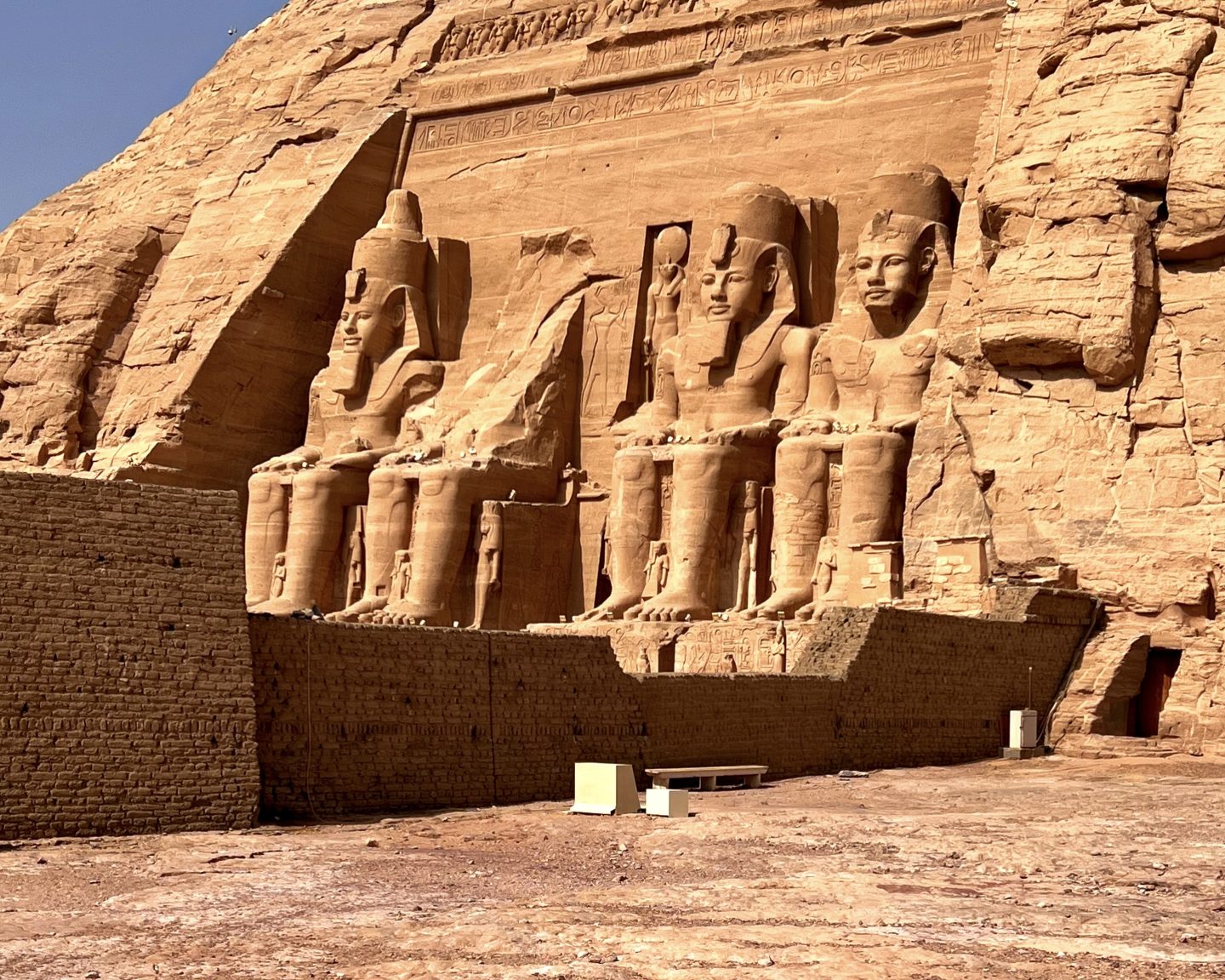 The temples of Abu Simbel were constructed over 3000 years ago by Ramesses II, one of the most powerful rulers of ancient Egypt.

The Great Temple of Abu Simbel is dedicated to the gods Amon-Ra, Ra-Harakhti, and Ptah, but it was also erected to demonstrate the might of the Egyptian empire and for the eternal glorification of Ramesses II.

The Small Temple is dedicated to Queen Nefertari, the beloved and favorite wife of Ramesses II.

Construction of the 2 temples took 20 years and was completed in 1244 BC.

Over time, the temples were forgotten and slowly covered with sand. In 1813, Jean-Louis Burckhardt rediscovered the temple. Once the sand was cleared, this became a tourist destination, attracting visitors even at the end of the 19th century.

With the construction of the Aswan High Dam, rising water levels threatened to flood the temples of Abu Simbel. In the 1960s, the entire complex was moved to higher ground and completely reconstructed. It took the combined effort of over 50 countries and 5 years of work to save the temples. 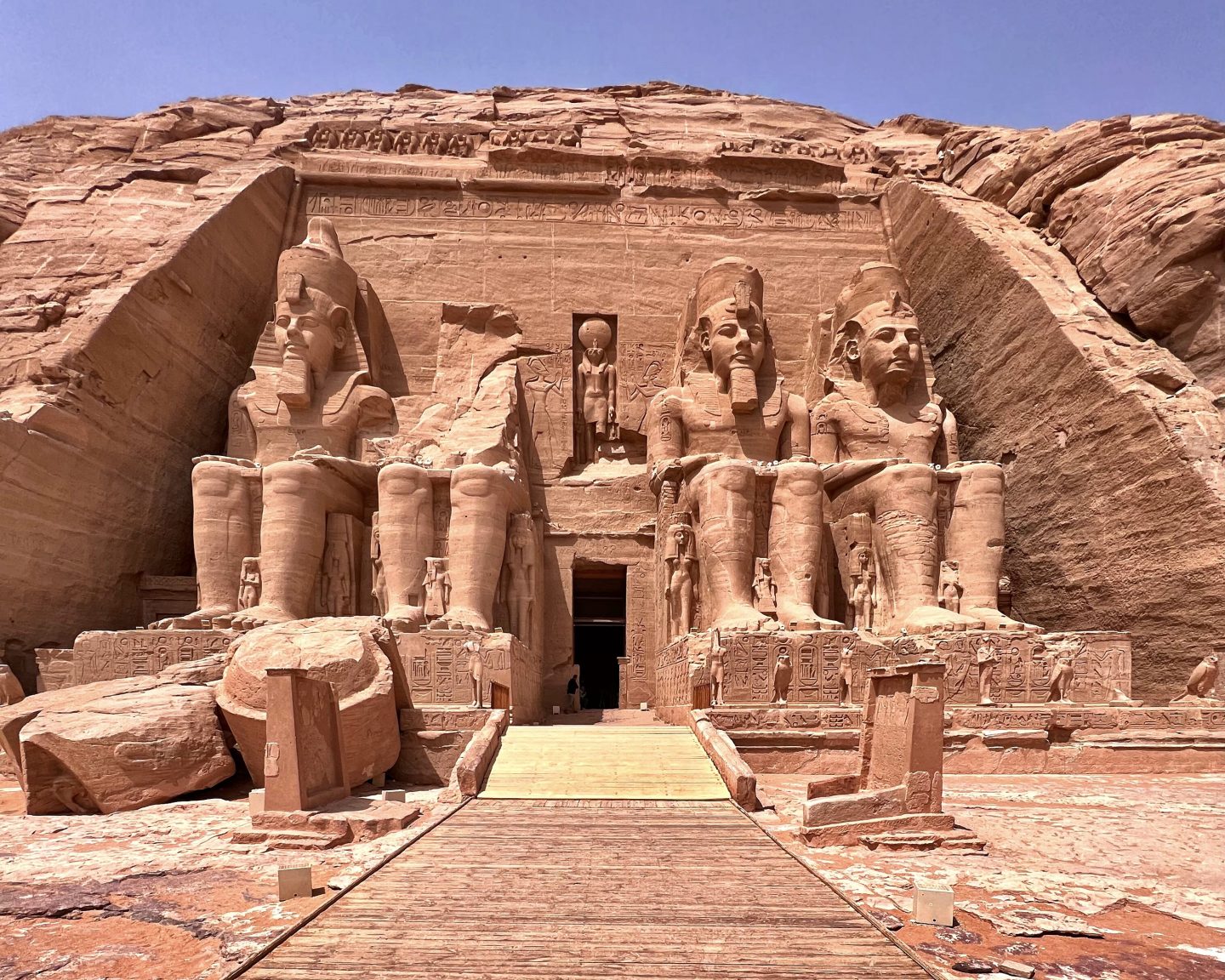 The first temple you will see is the Great Temple. Four massive statues of Ramesses II stare down at visitors. Sitting next to and between the legs of Ramesses are members of the royal family, including his beloved wife Nefertari, sons, daughters, and his mother. The broken statue was damaged in an earthquake and a portion of the statue sits on the ground in front of the facade. 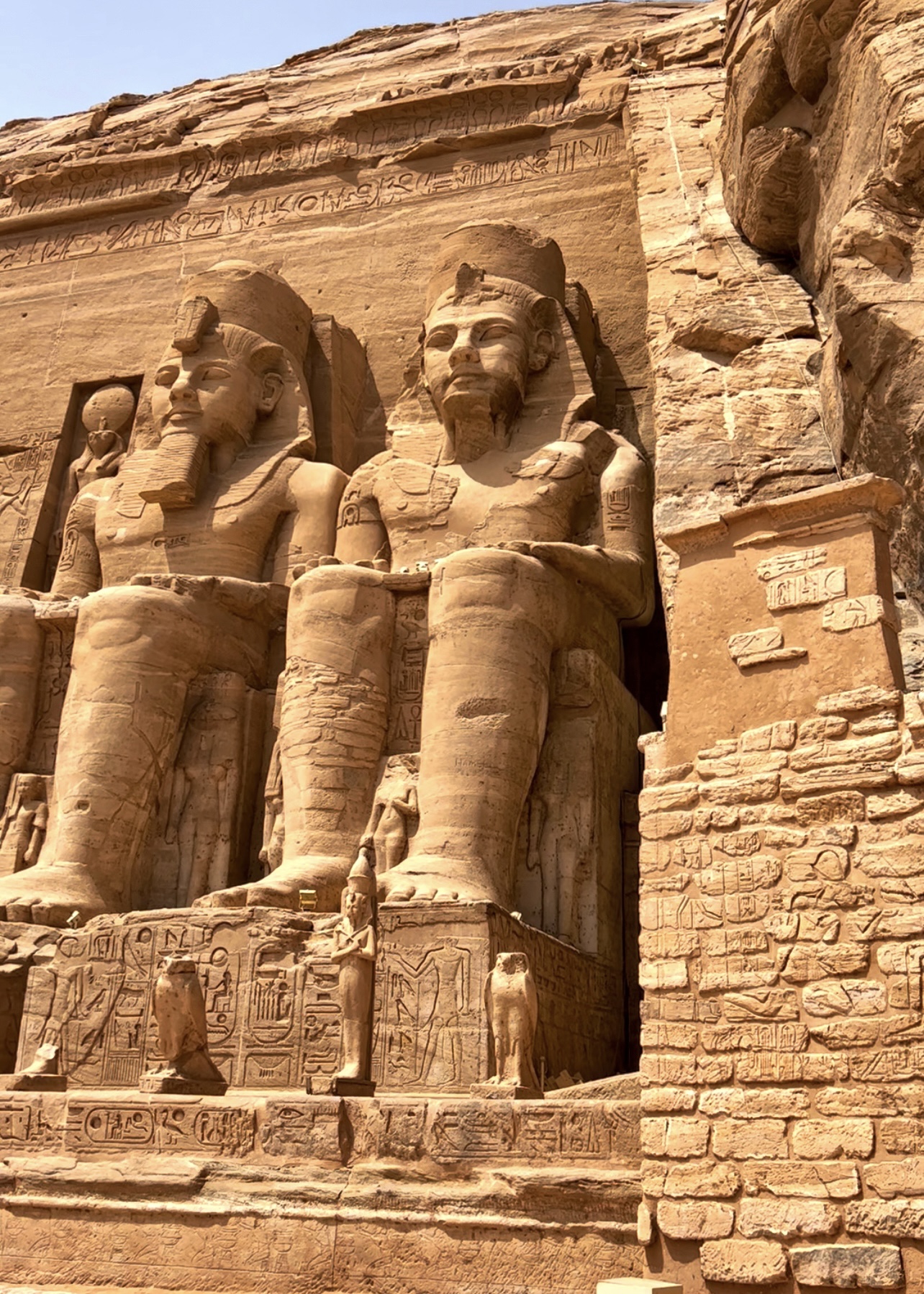 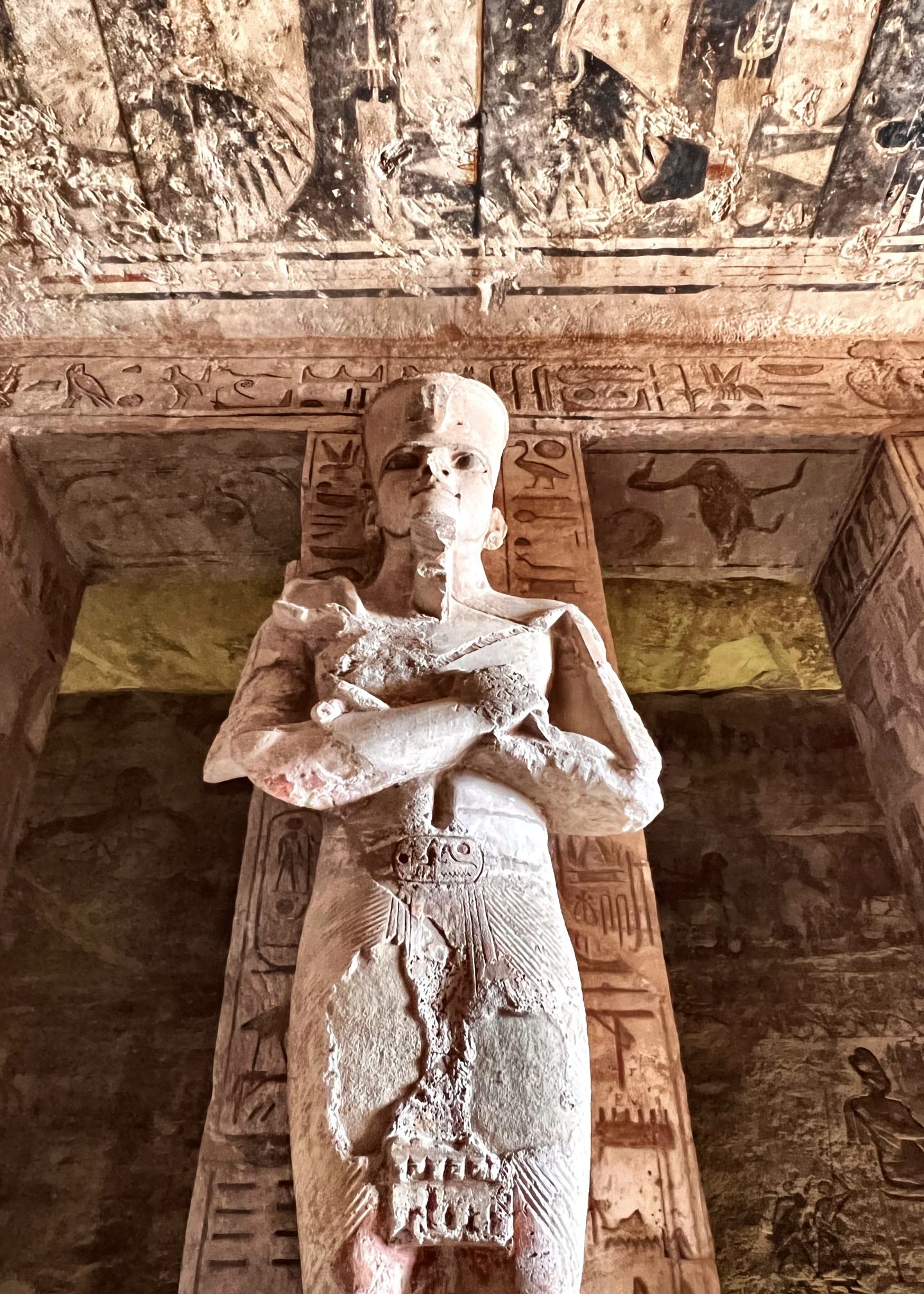 Inside the temple, eight statues of Osiris, with the facial features of Ramesses II, fill the first main chamber. There are numerous smaller chambers and vestibules to explore. 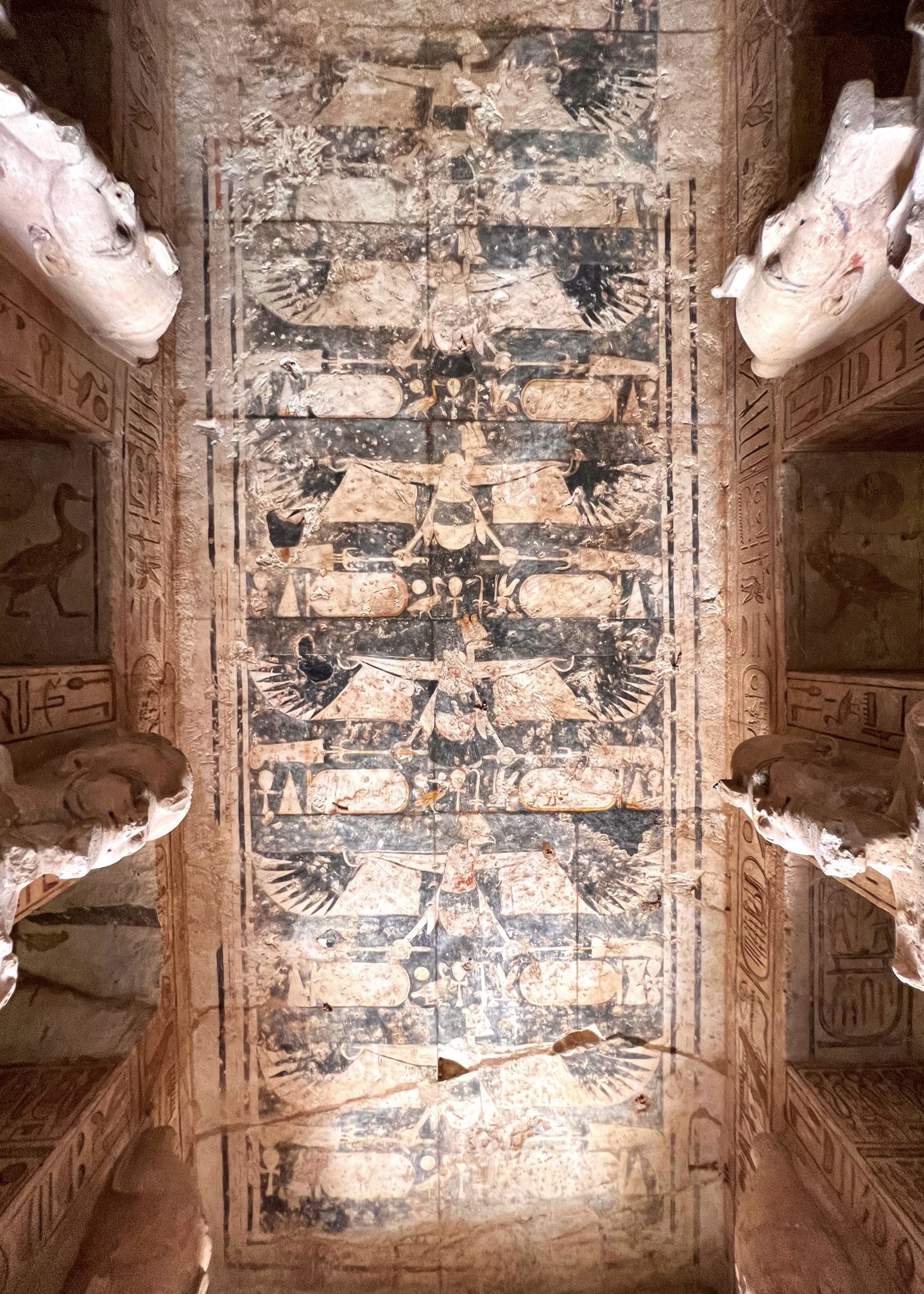 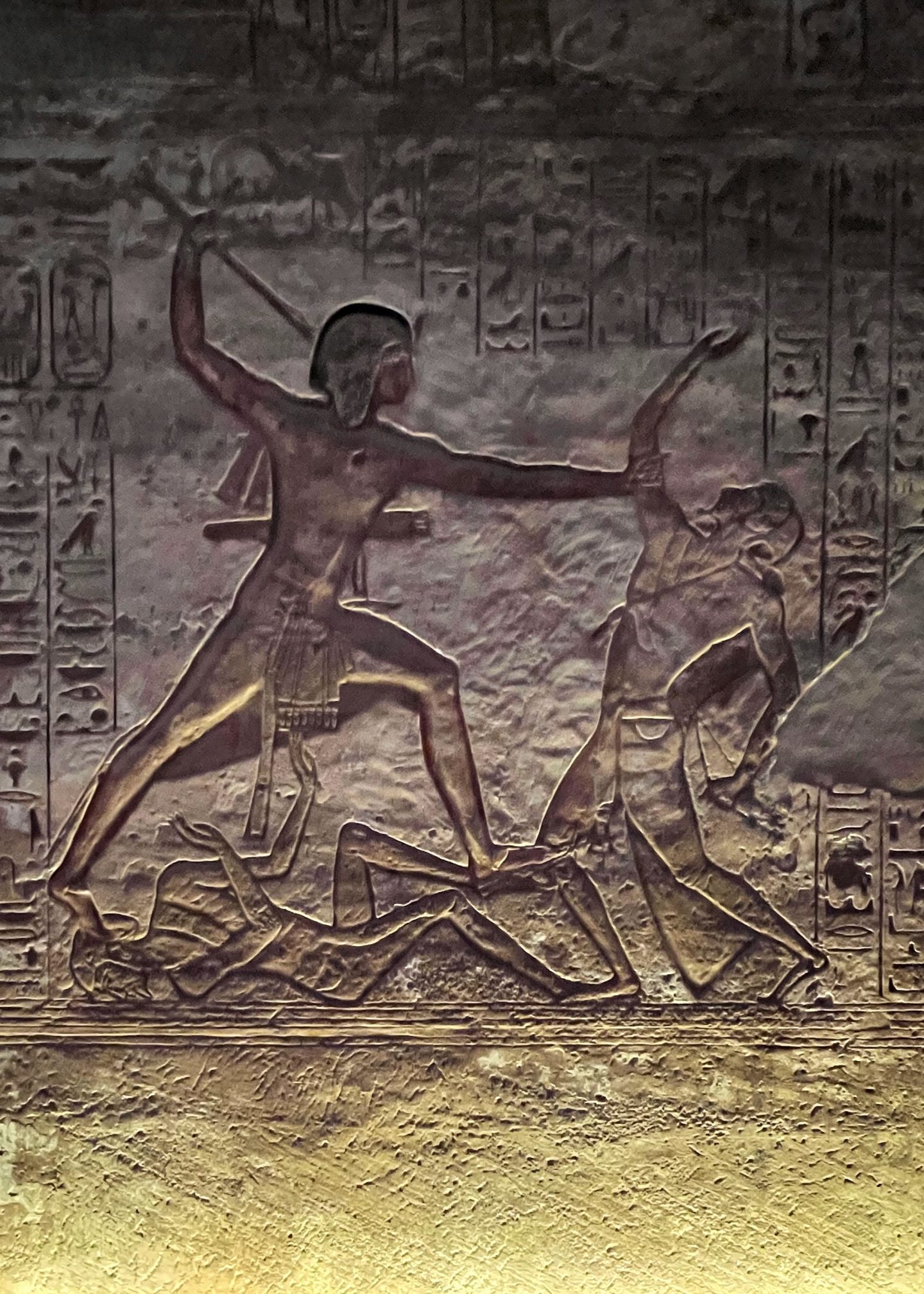 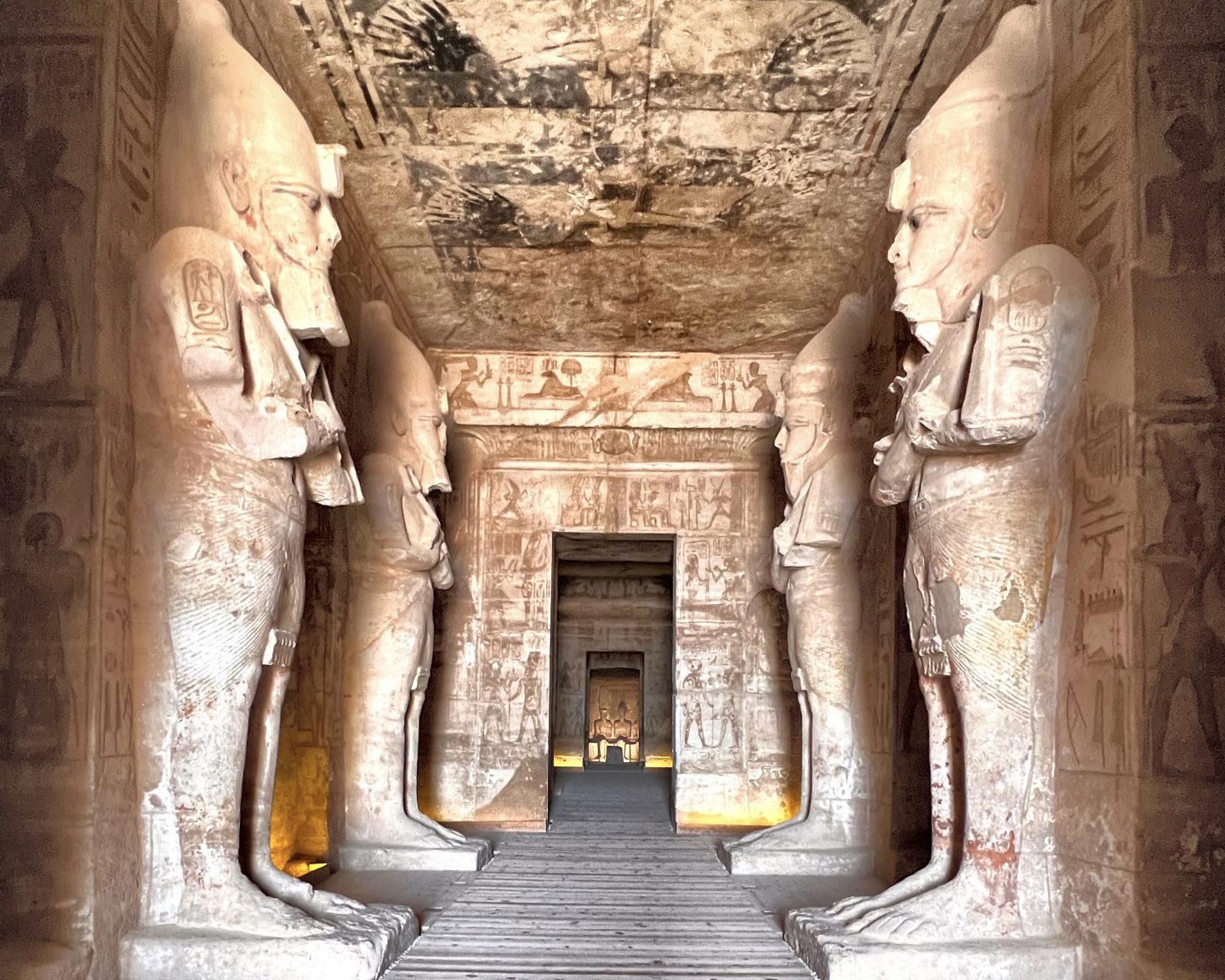 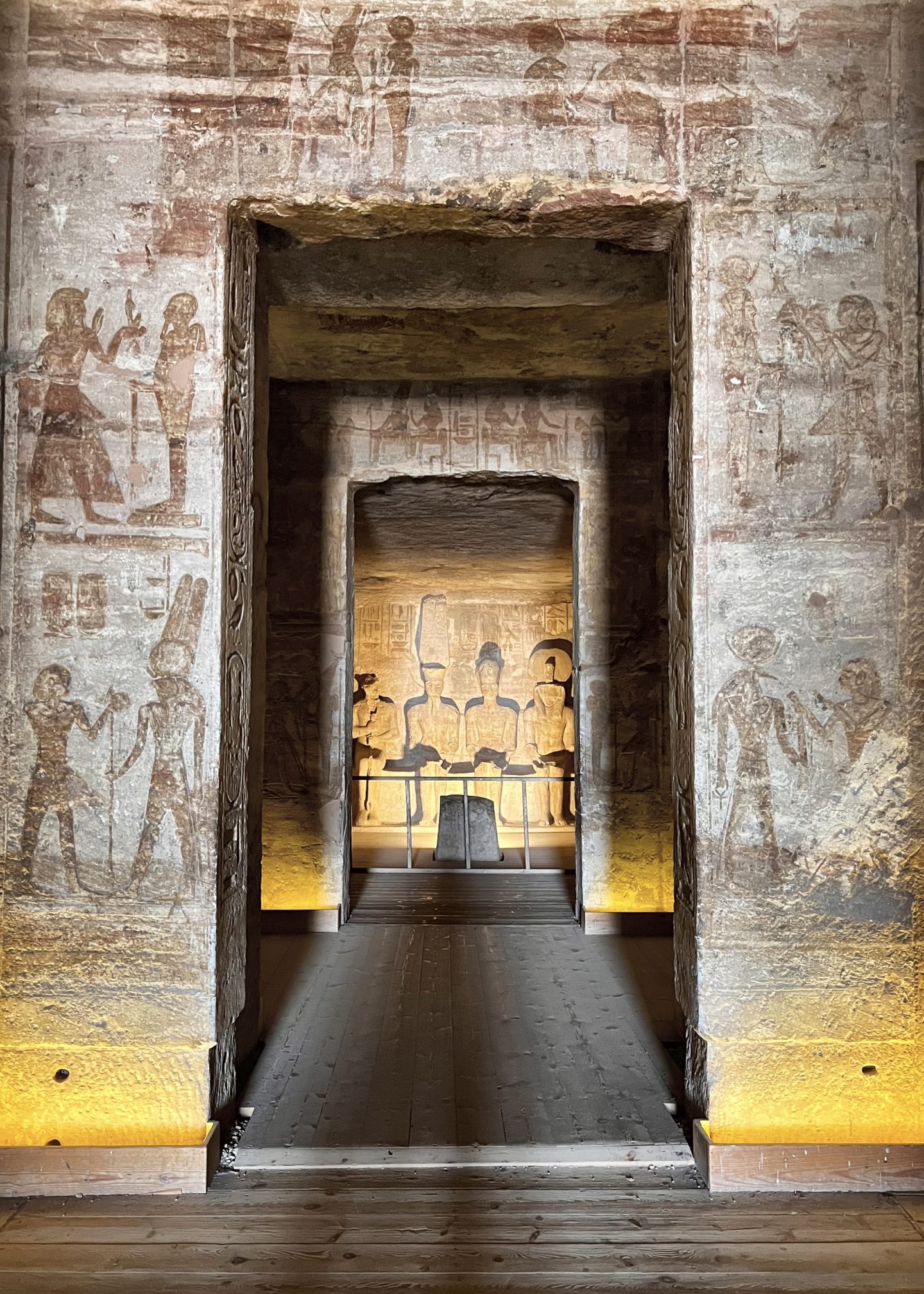 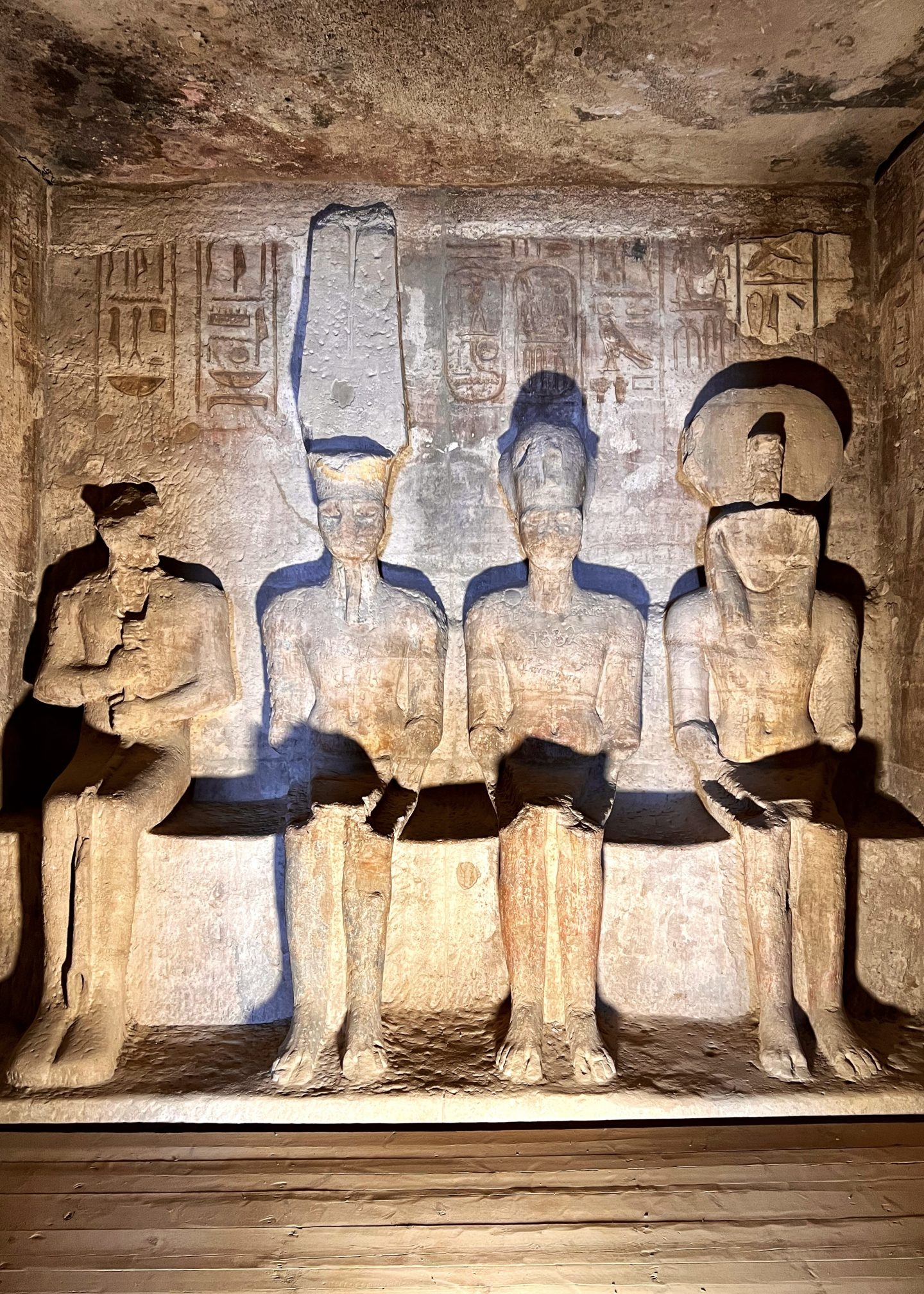 The Small Temple is a Temple of Hathor, dedicated to Nefertari. Of the statues on the facade of the temple, Nefertari is represented as Hathor, with the horns of a cow, a solar disc, and two plumes. 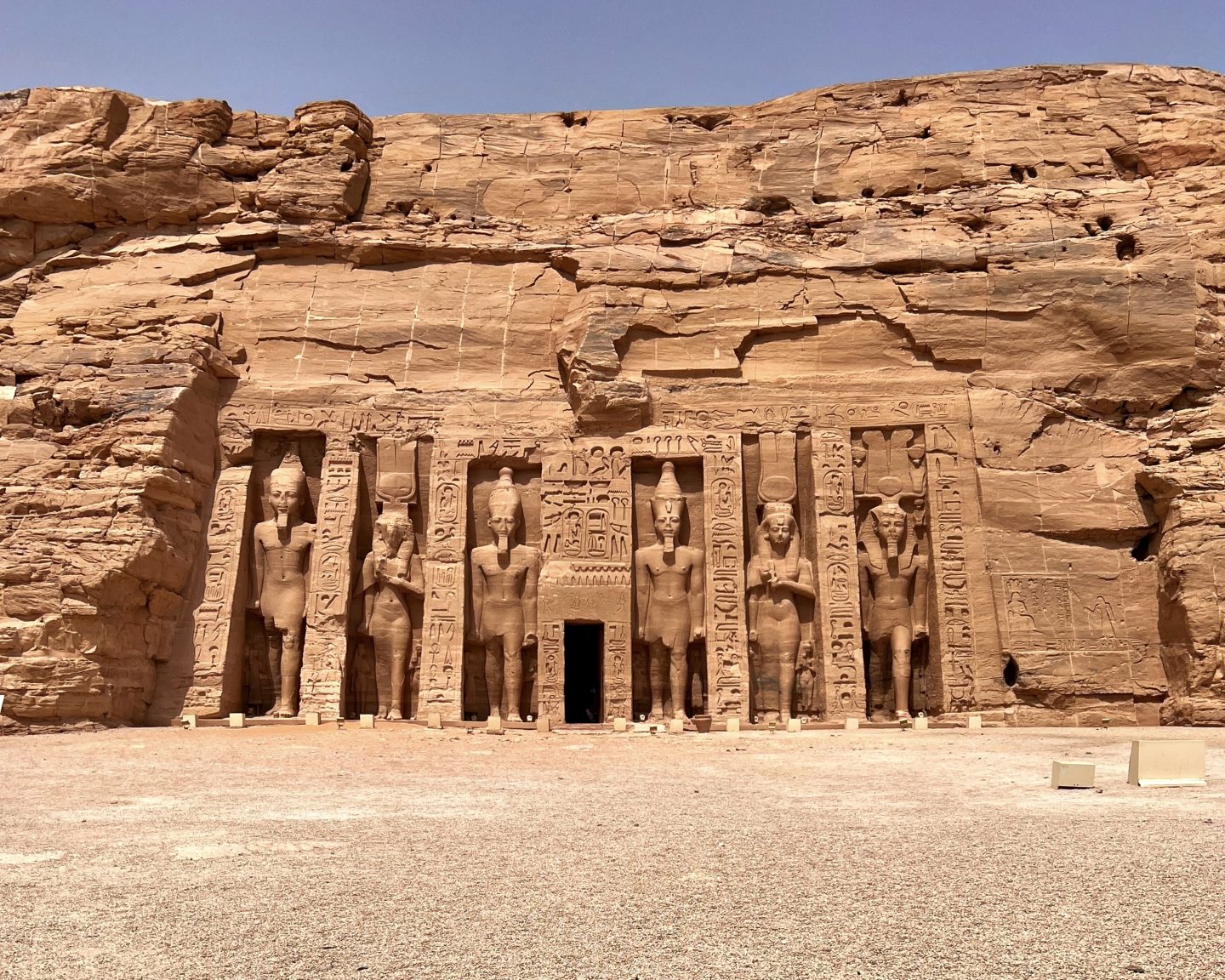 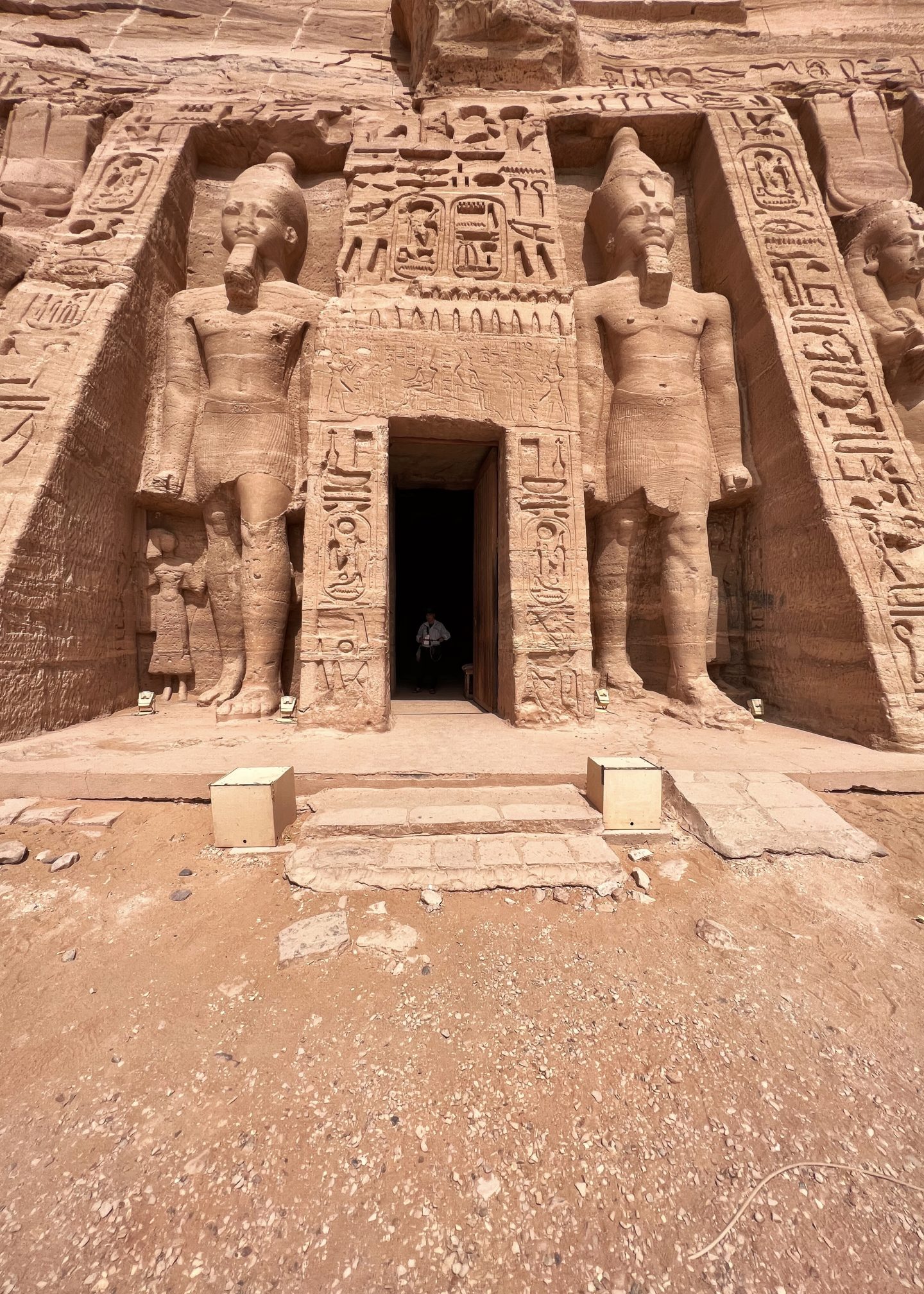 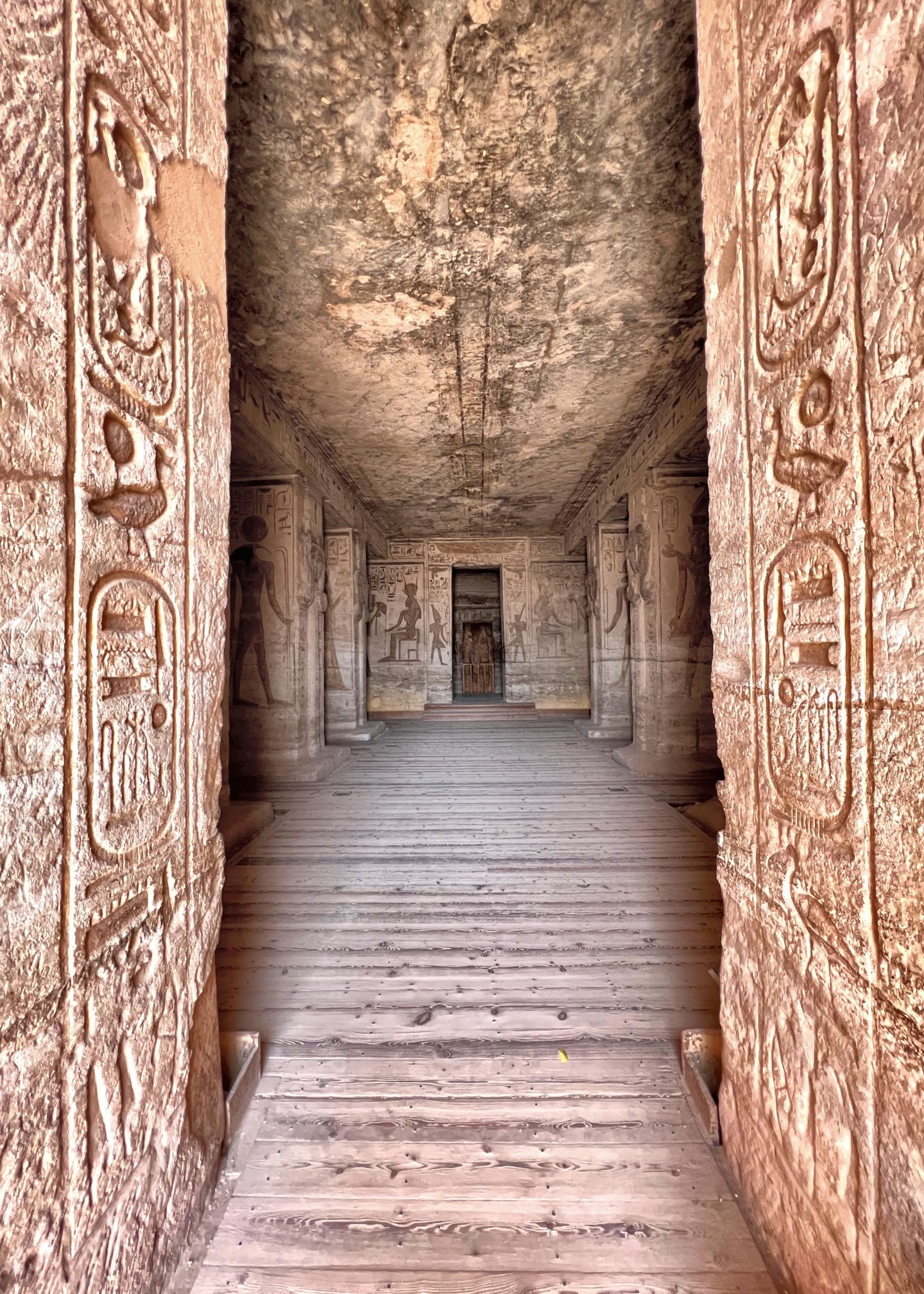 Once inside, you will see that this temple is much smaller than the one dedicated to Ramesses II. The hypostyle room contains pillars with the heads of Hathor. The hieroglyphics tell the story of the king and queen. 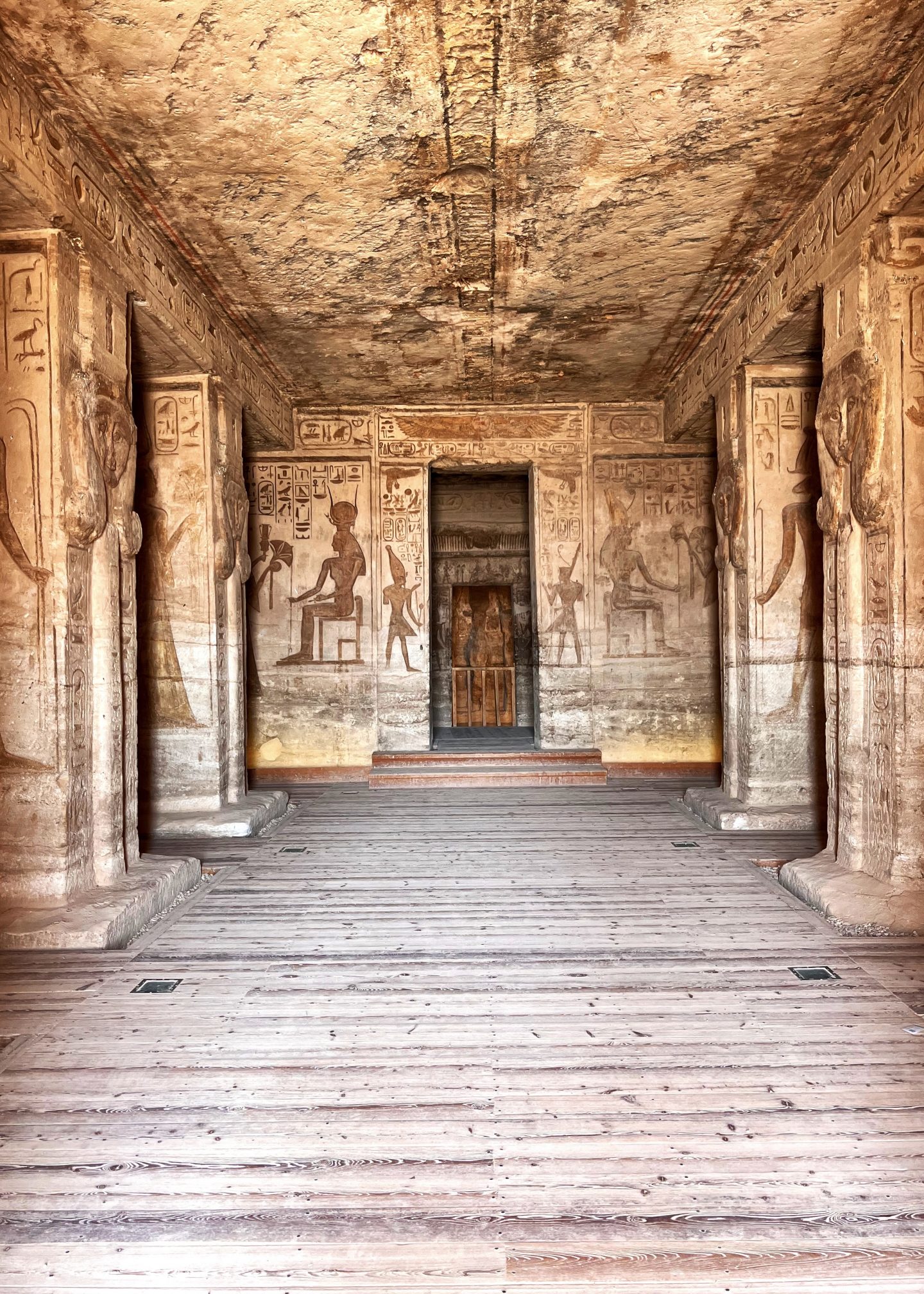 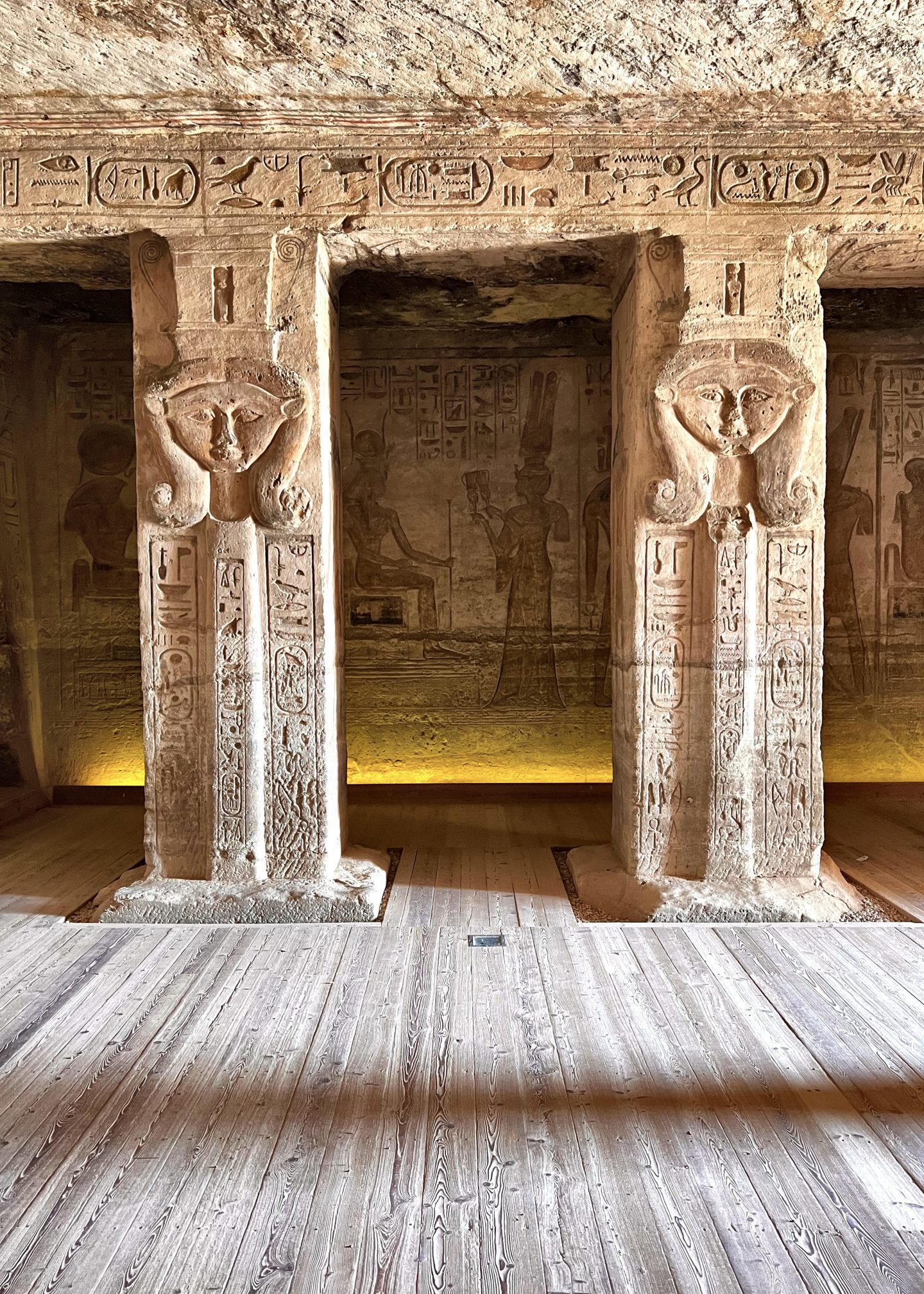 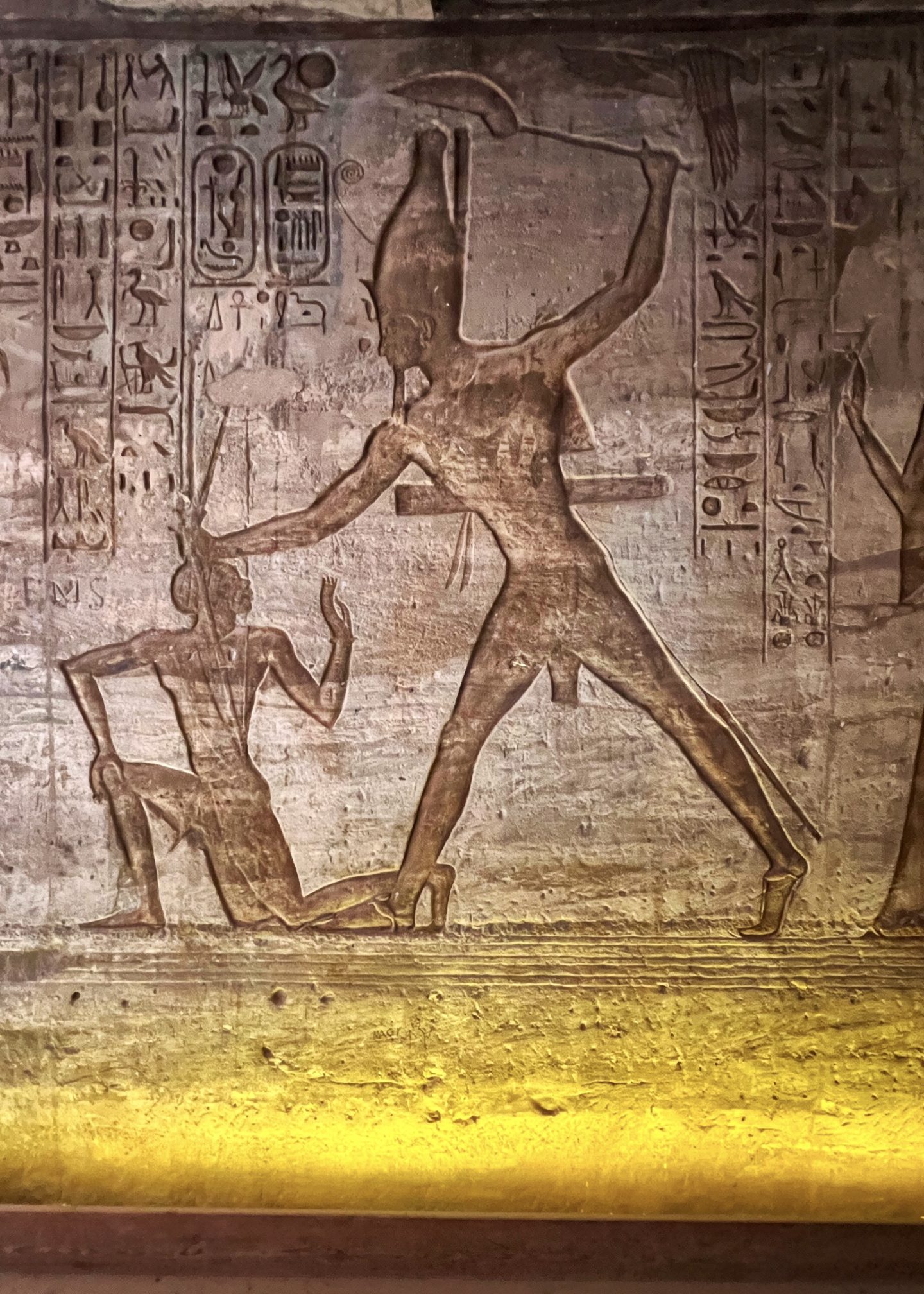 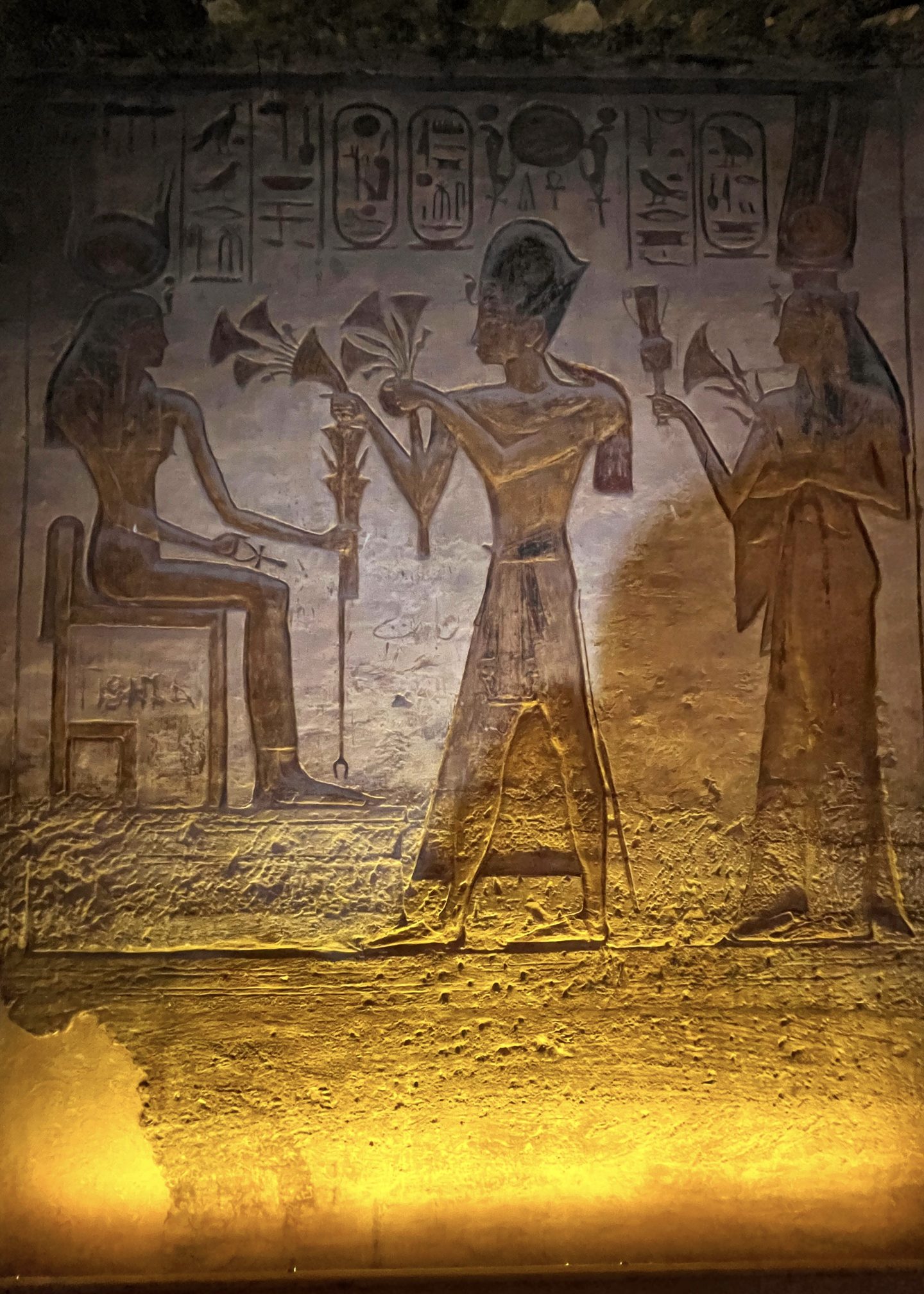 The tours from Aswan fill up the complex from 7 am – 11 am. If you want to wander around Abu Simbel without the crowds we recommend you visit after 11 am.

We arrived there around 5.30 am together with all the other visitors and stayed till 1 pm. After 11 am we were the only ones there. 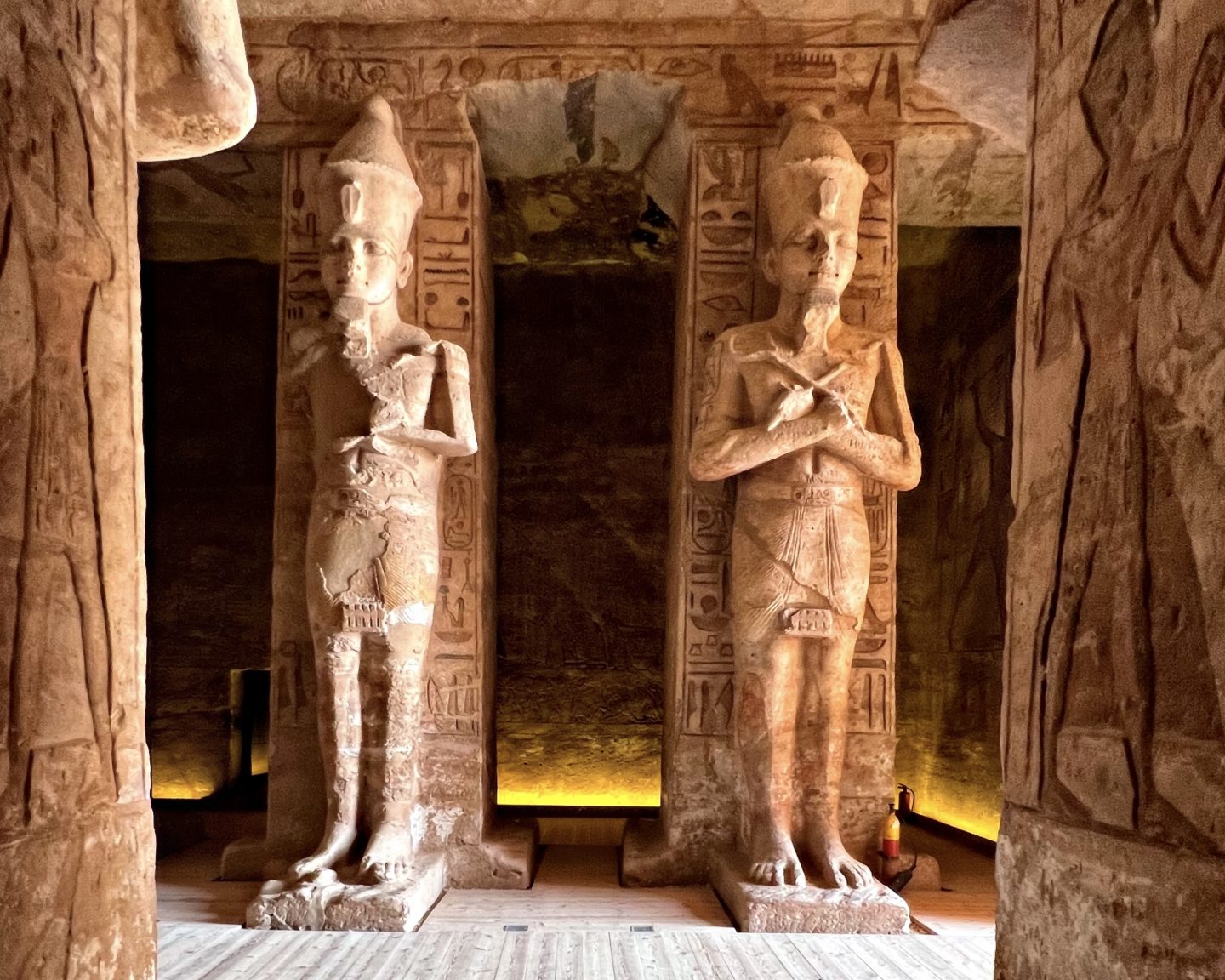 How much time do you need to visit Abu Simbel?

We recommend you allow at least a half-day to explore Abu Simbel. 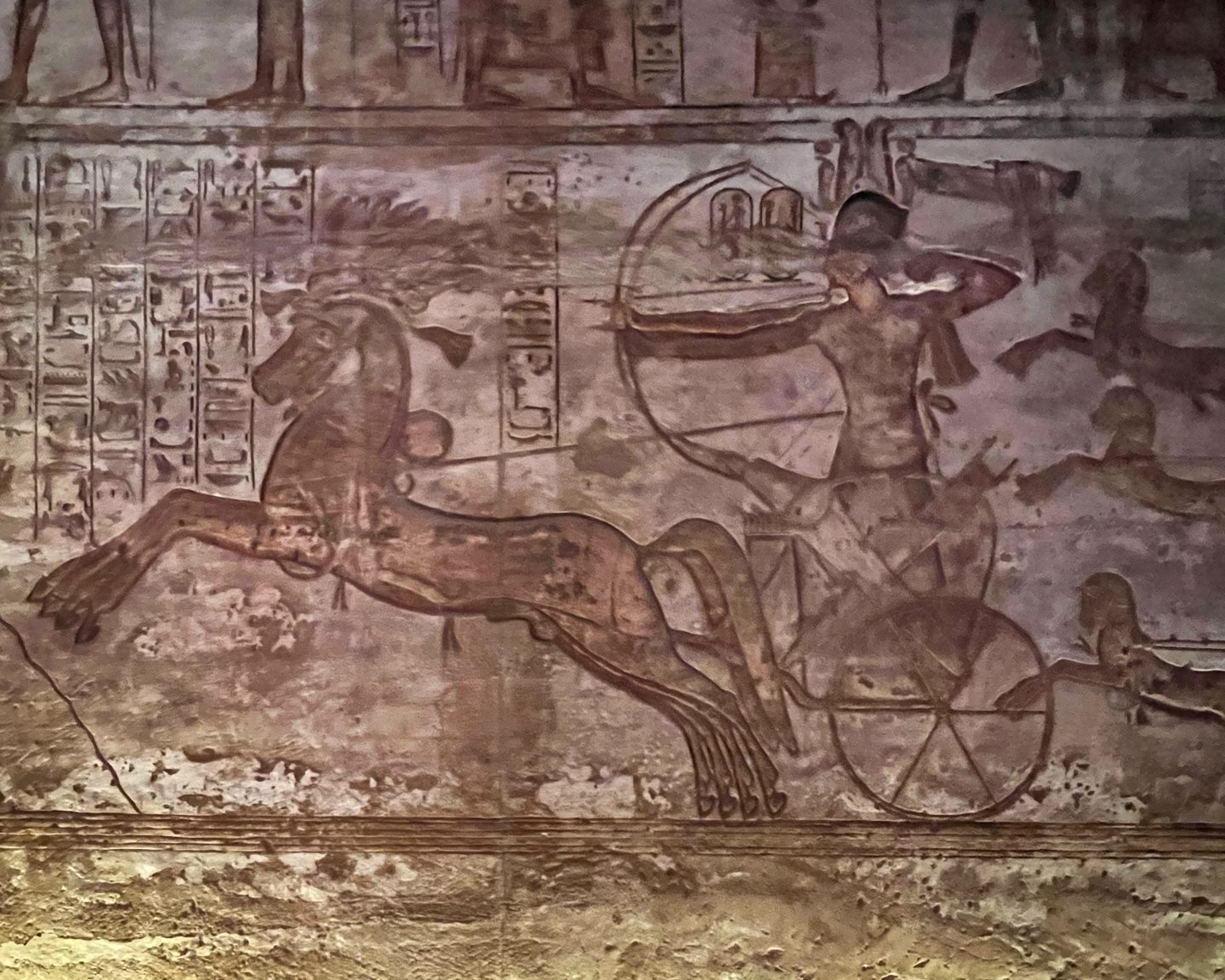 Every famous place in Egypt has a night show where they light up the monuments with a projector and tell stories about their history.

The show at Abu Simbel starts at 7 pm and lasts about 45 minutes. The Abu Simbel Sound and Light Show price is 150 LE, that is if 7 or more tickets are sold for that evening. If that isn’t the case you will have to make up the difference or there is no show.