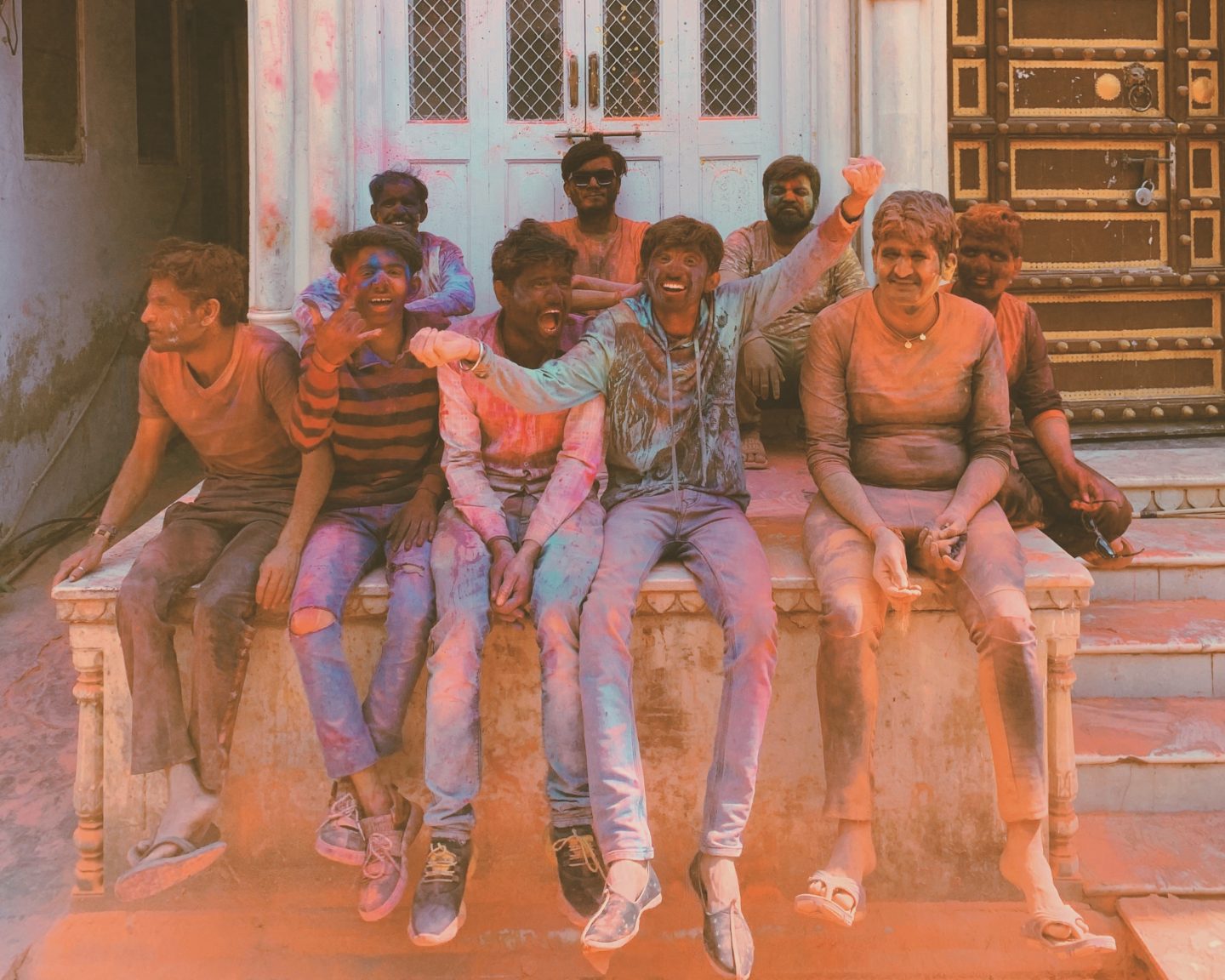 Holi is an ancient Hindu religious festival, known as the festival of colors or the festival of love. The festival is said to signify the victory of good over evil, and the arrival of spring. It’s celebrated all over India and now it’s getting more and more famous around the world.

The first day of  Holi is called Holika Dahan. After sunset people gather around a huge pile of wood. They perform prayers and then set the pile of wood on fire. People sing and dance around the bonfire as it symbolizes the victory of good over evil.

The second day of Holi is called Rangwali Holi, Badi Holi or Dhulandi. This day is filled with color throwing, water gun spraying, and dancing in the streets.

The colored powders people throw at each other are called gulal. Gulal is made from flower and herb extracts, especially Turmeric.

All these colors are a reflection of India’s diversity and its rich culture and traditions. 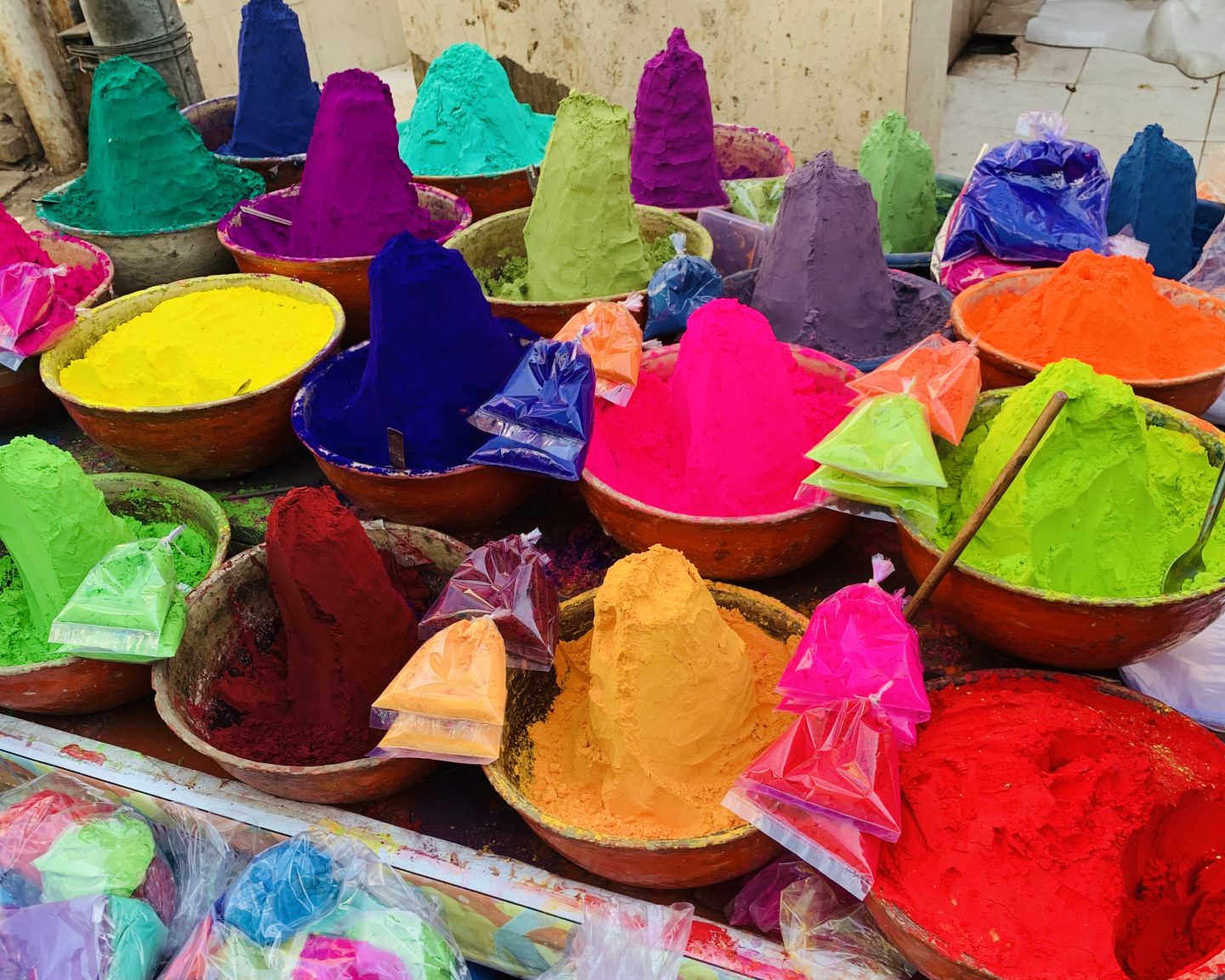 The story behind Holi

Once there was a powerful king named Hiranyakashipu. He considered himself to be God and commanded everyone in his kingdom to worship only him. But to his great disappointment his son, Prahlad was a devotee of Lord Vishnu and refused to worship his father. Angry with the disobedience of his son Hiranyakashipu tried killing his son a number of times, but nothing worked. He then asked his evil sister Holika for help. Holika had a special power of being immune to fire. To kill Prahlad she tricked him into sitting with her on a large pile of burning wood. But due to her evil intentions, her power became ineffective and she was burned to ashes. Prahlad gained this immunity and was saved. This is why the first day of Holi is celebrated as Holika Dahan and symbolizes the victory of good over evil.

When Krishna was a baby his skin turned blue after drinking the poisoned breast milk of the demon Putana. When Krishna became older he would often feel sad about whether Radha or the other girls in the village would ever like him because of his blue color. Krishna’s mother asked him to go and color Radha’s face with any color he wanted to. When Krishna applied color to Radha they became a couple. Since then people started applying colors to one another.

Pushkar is a little pilgrimage town unlike any other in Rajasthan. It’s world-famous for its spectacular camel fair which takes place in October and November.

The town wraps itself around a holy lake. The lake is surrounded by 52 bathing gats where pilgrims bathe in the sacred waters. If you want to join them you have to remove your shoes, don’t smoke and don’t take photographs. The main street is one long bazaar where you can buy souvenirs and find street food. 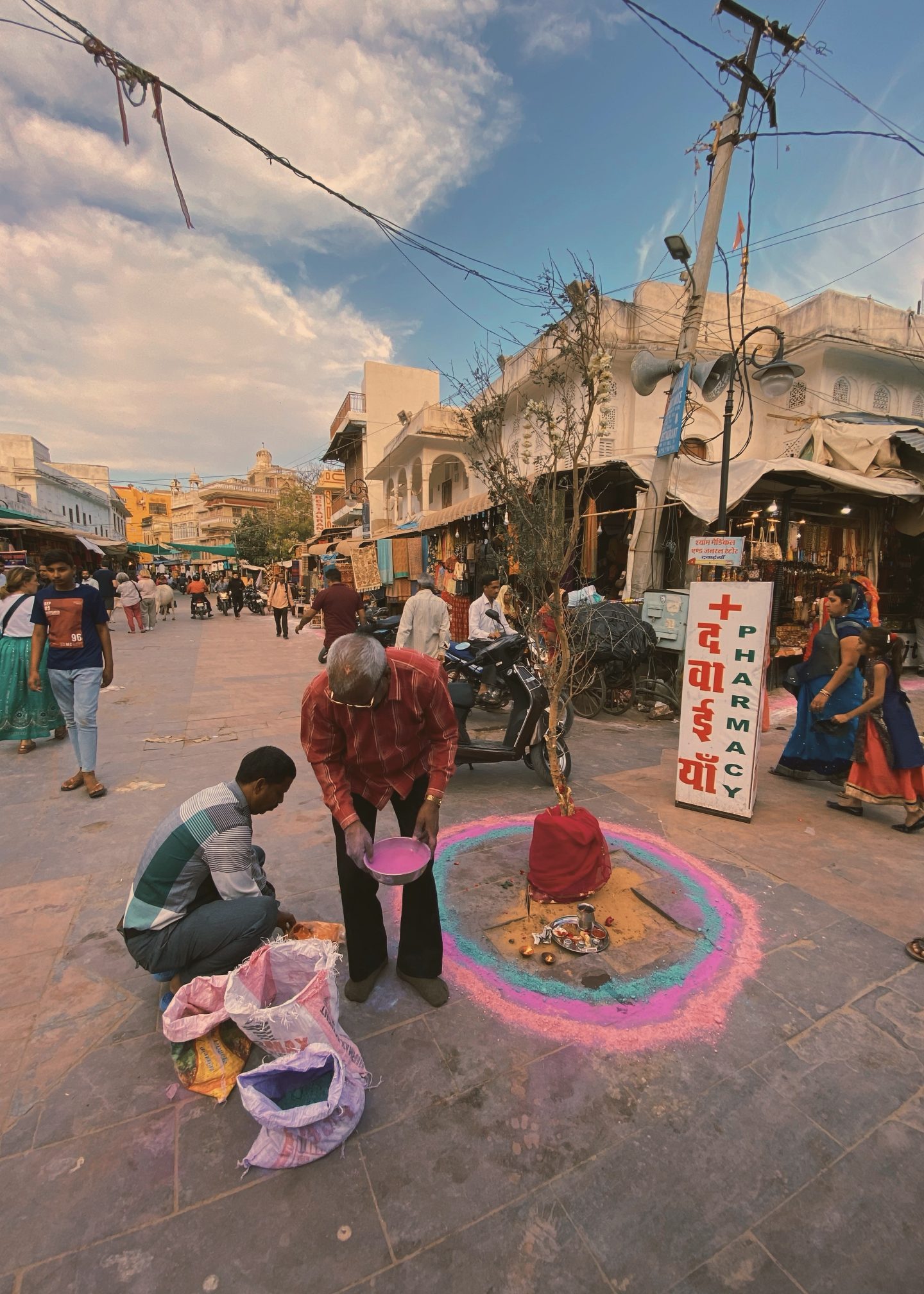 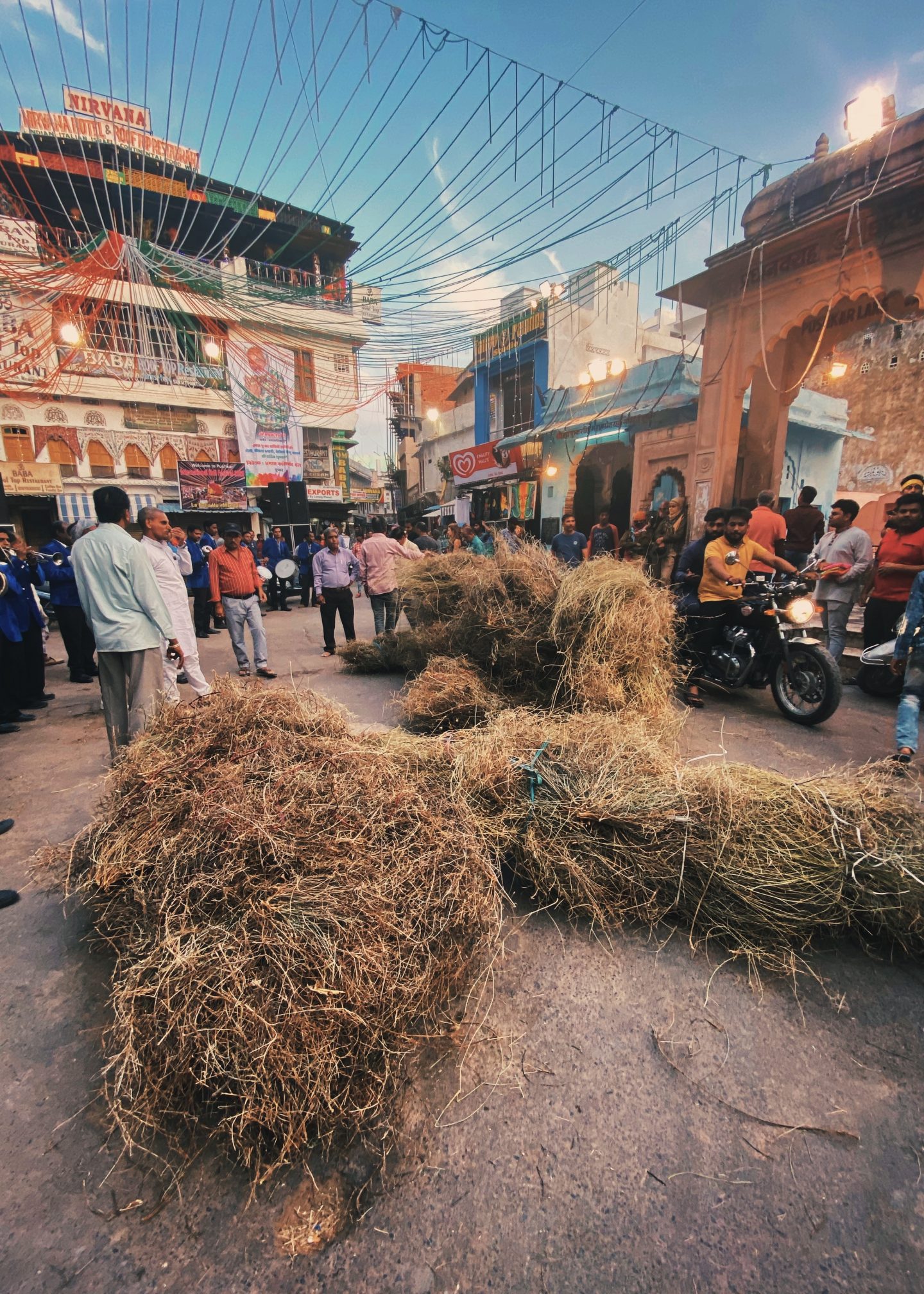 We arrived in Pushkar the morning of Holika Dawan. Since there is not a lot to do in Pushkar besides visiting some temples and the holy lake, we took it easy and wandered around on the streets. The streets were full of tourists, it looked like everyone who was traveling in India came to Pushkar.

Once the sun went down, we heard loud music. We followed the direction of the music and came out on the main square. There we saw local people gathering around a huge pile of wood. They performed prayers and then set the pile of wood on fire. The flames quickly grew to more than 3 meters high. Even though, we were standing a couple ofÂ meters away from the fire we could feel the intense heat. When the flames died down, the local people reached into the fire with metal trays, taking a piece of the smoldering embers home with them. This is said to bring good luck.

After this traditional music started to play and everyone started to dance around the bonfire. We danced with the locals and enjoyed seeing everyone happy. 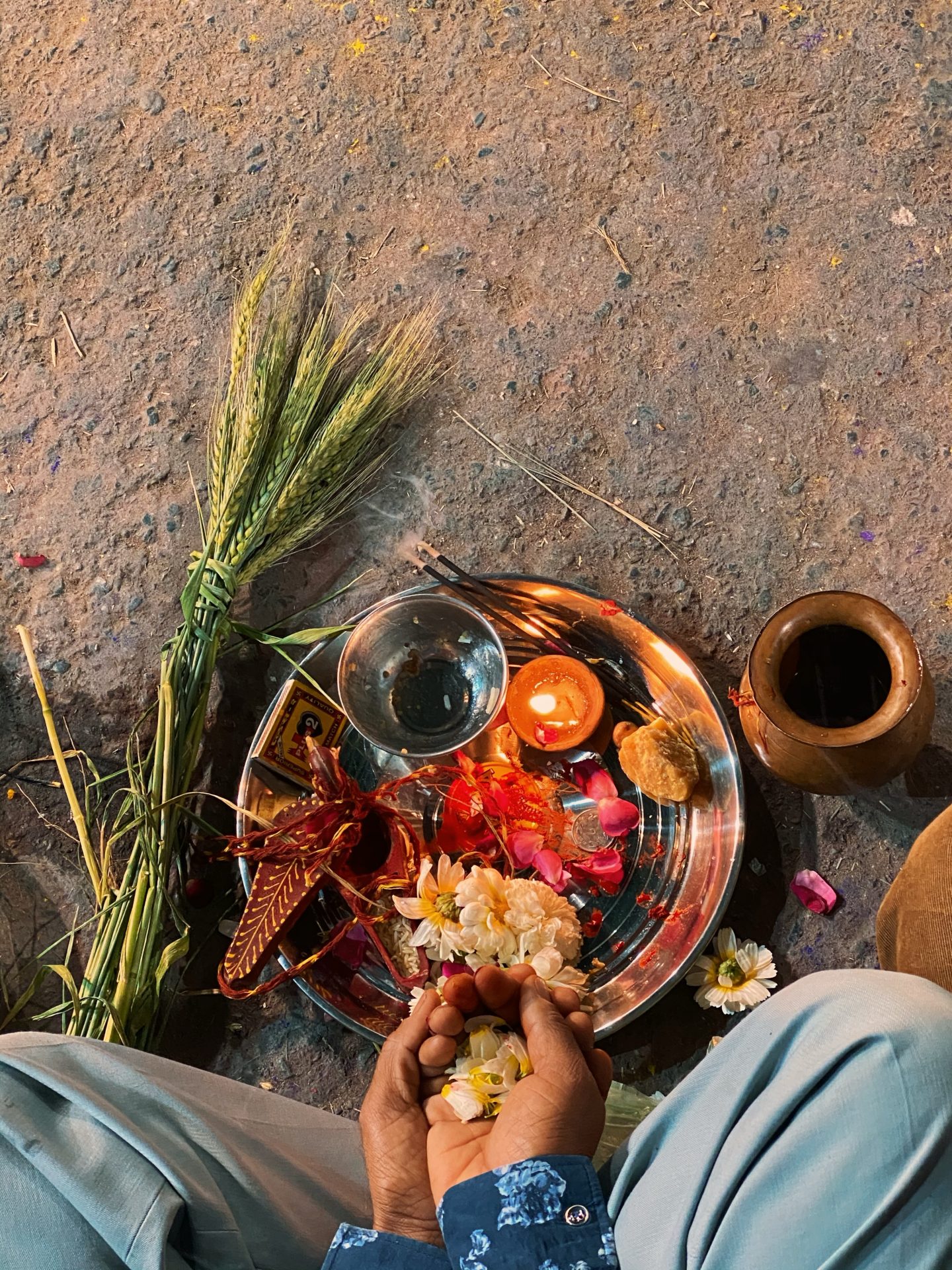 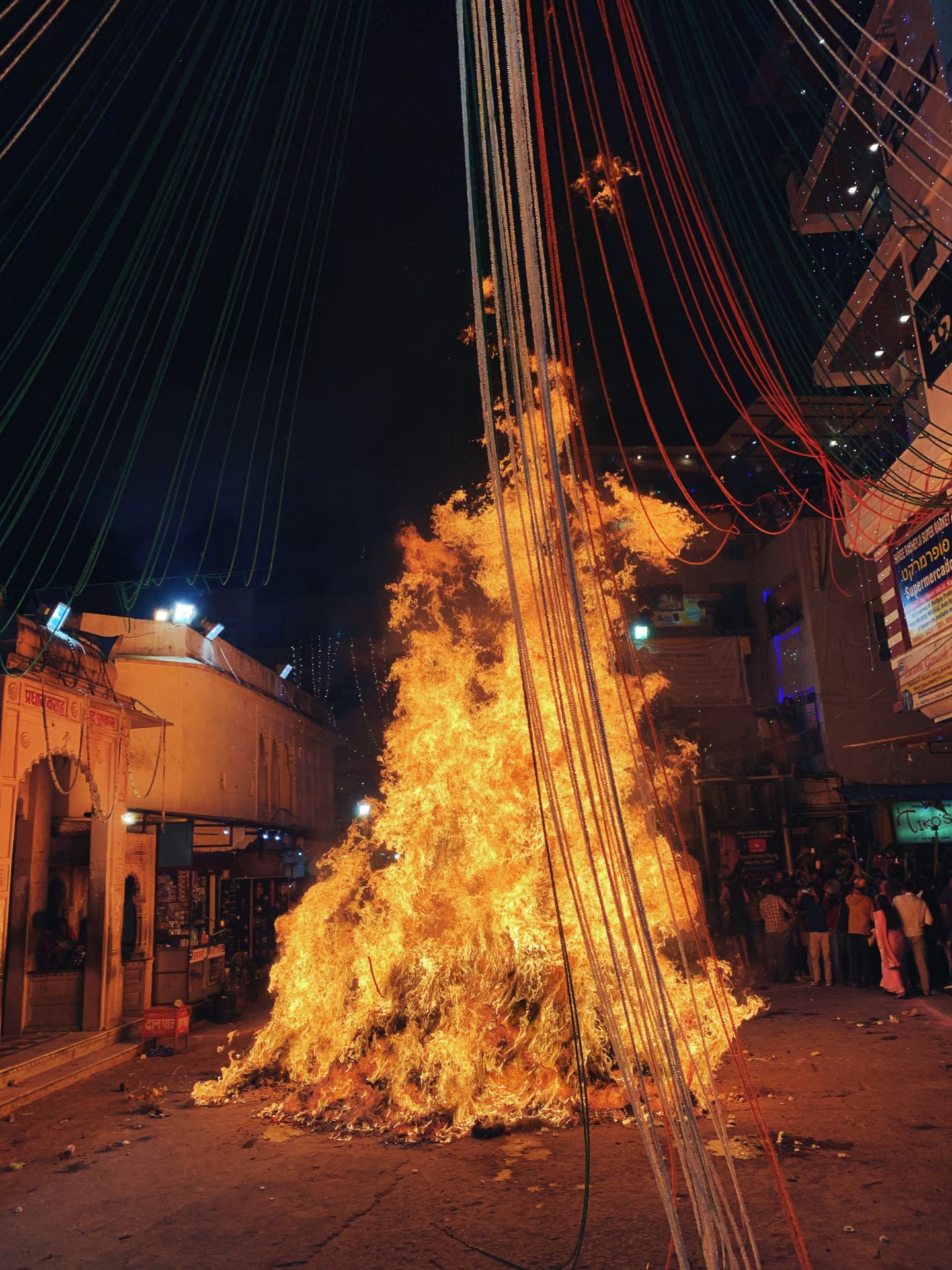 On the morning of Holi, we went out early (9 am) with our colors in hands and wearing some old white clothes. Once outside we were immediately greeted by children smearing colors onto our faces and wishing us a Happy Holi.

As we kept going towards the main square, the street was growing busier and busier. When we got to the main square, the sight was as crazy as we expected. A huge crowd was dancing on traditional music in a cloud of colors. We danced, threw colors and wished the locals and tourists a ‘Happy Holi’. 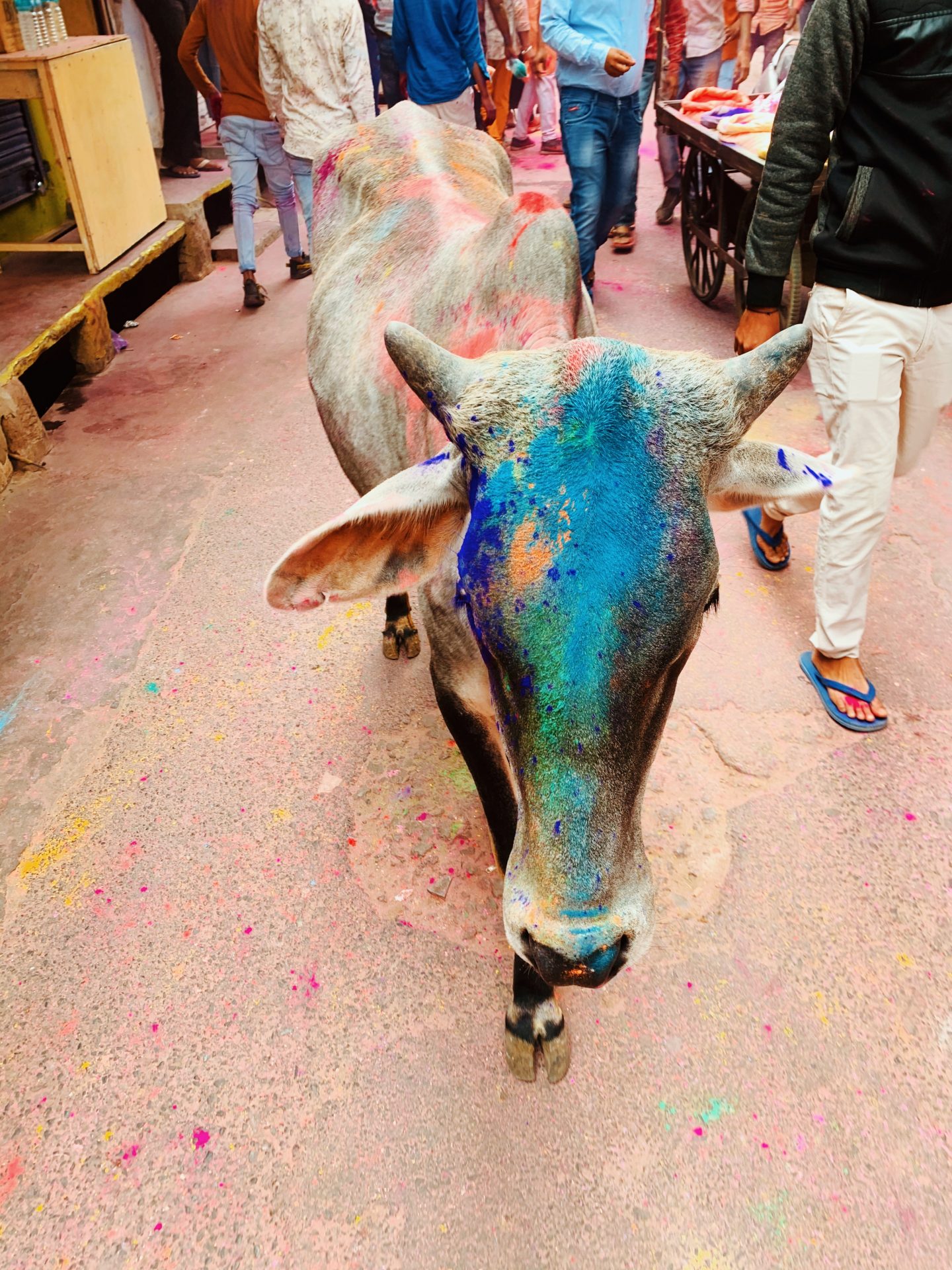 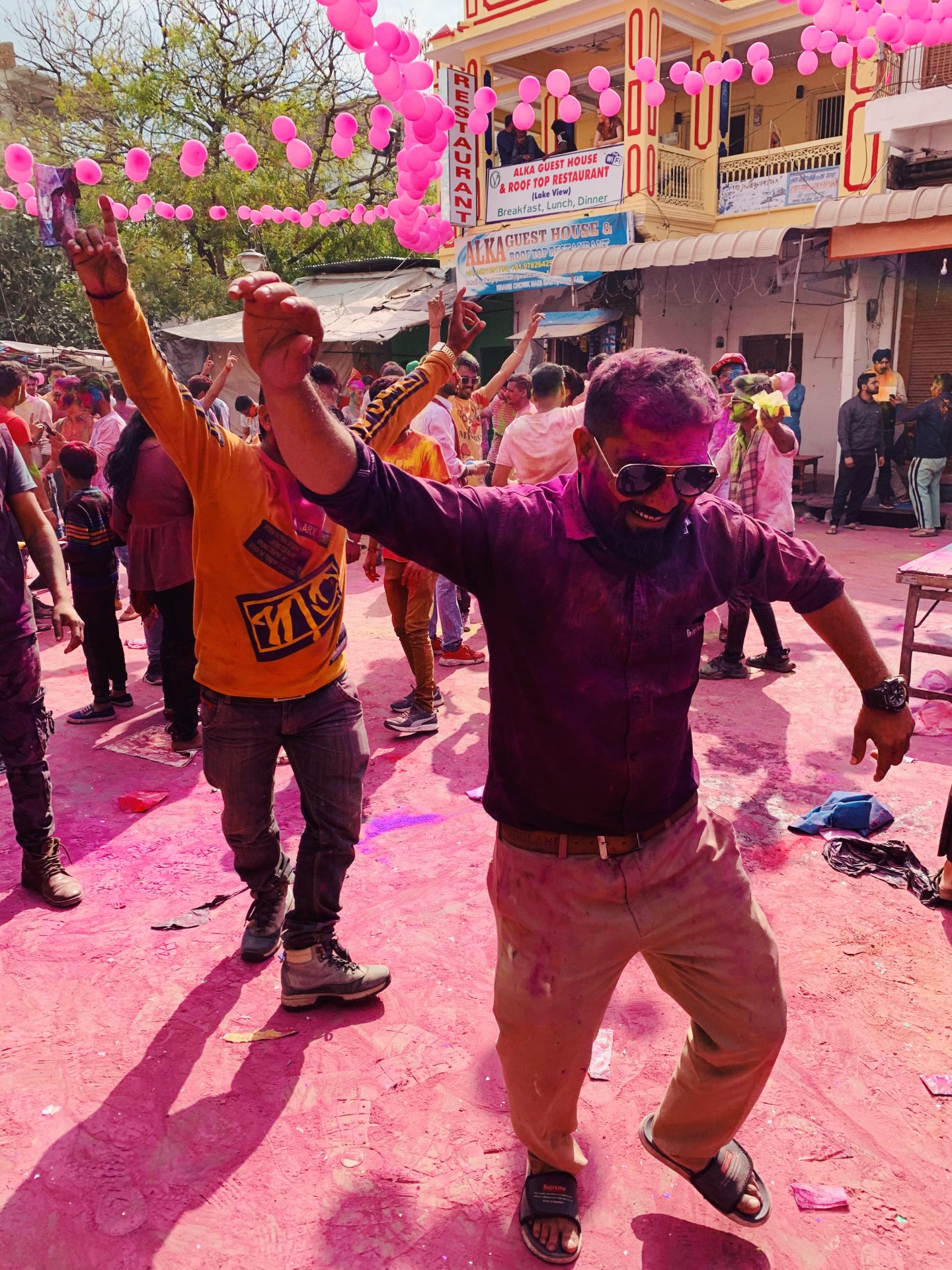 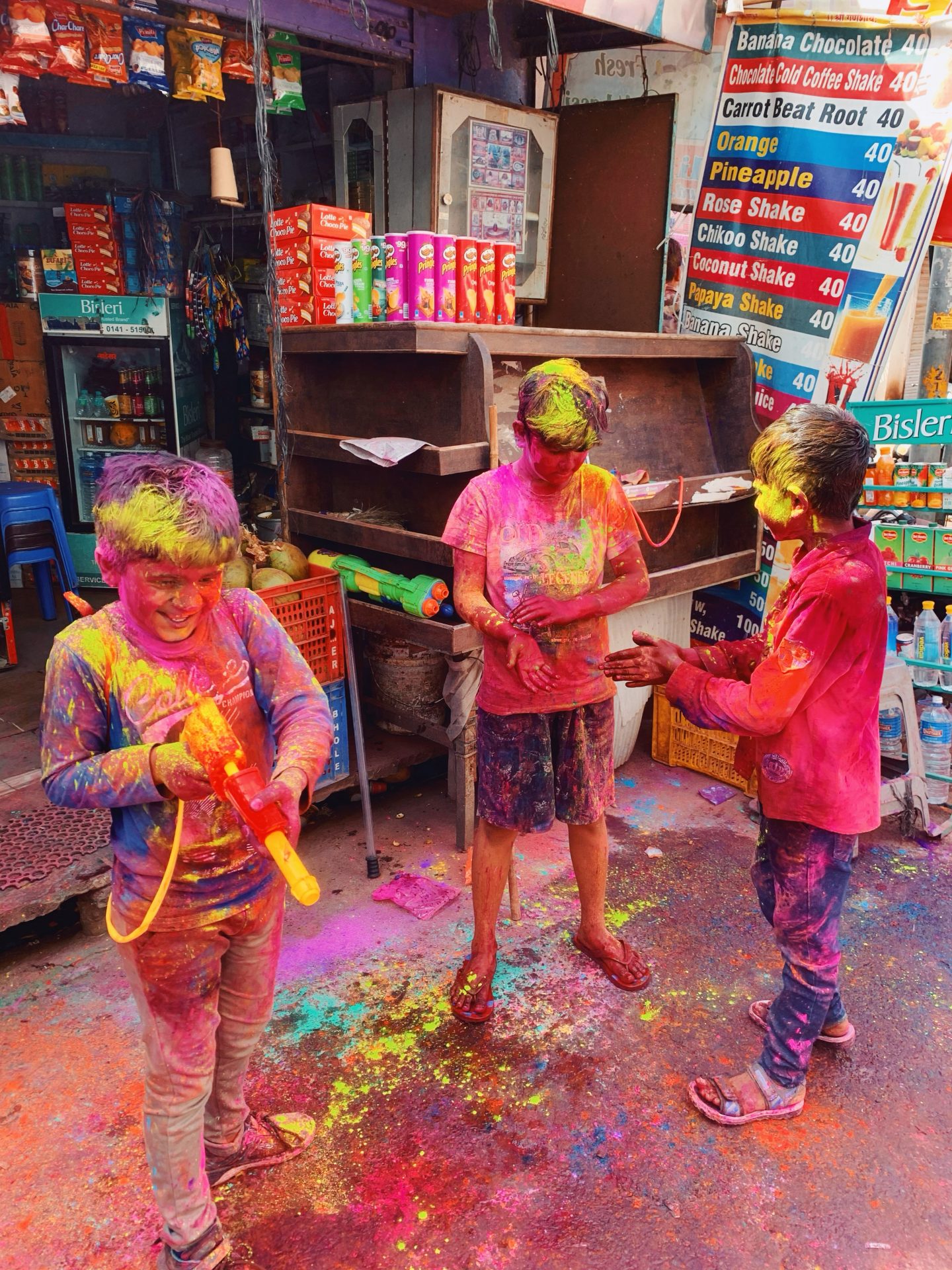 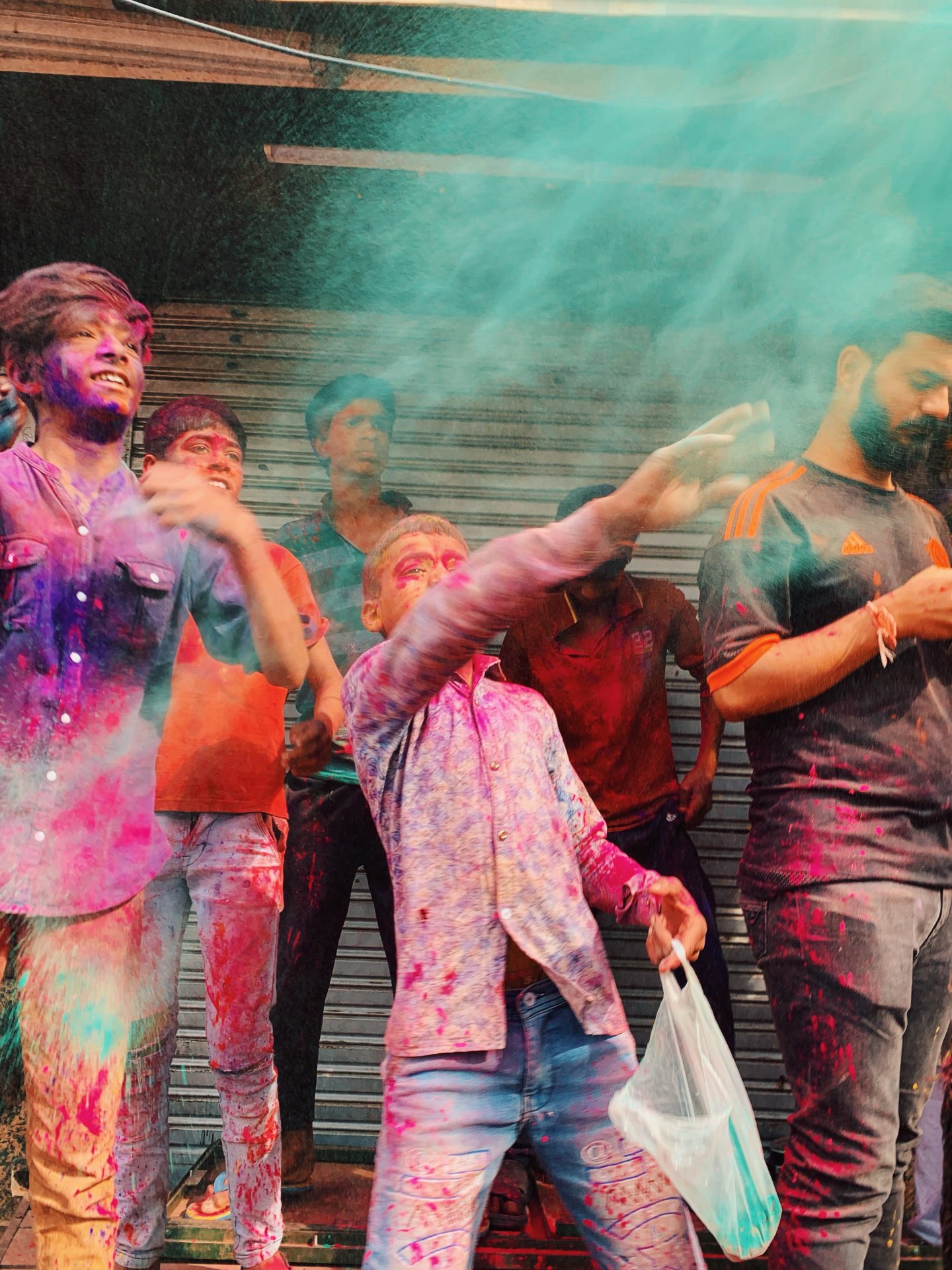 After a while, we got out of the crowd. Covered in colors from head to toe we wandered on the streets. Only the kids were throwing powder and water at us, laughing and having fun.

We searched for a shop where we could buy fresh drinks but it looked like they were only selling bhang. Bhang is a weed milkshake that’s very popular in India.

We got tired of the crowd and the loud music and flew to a rooftop bar. 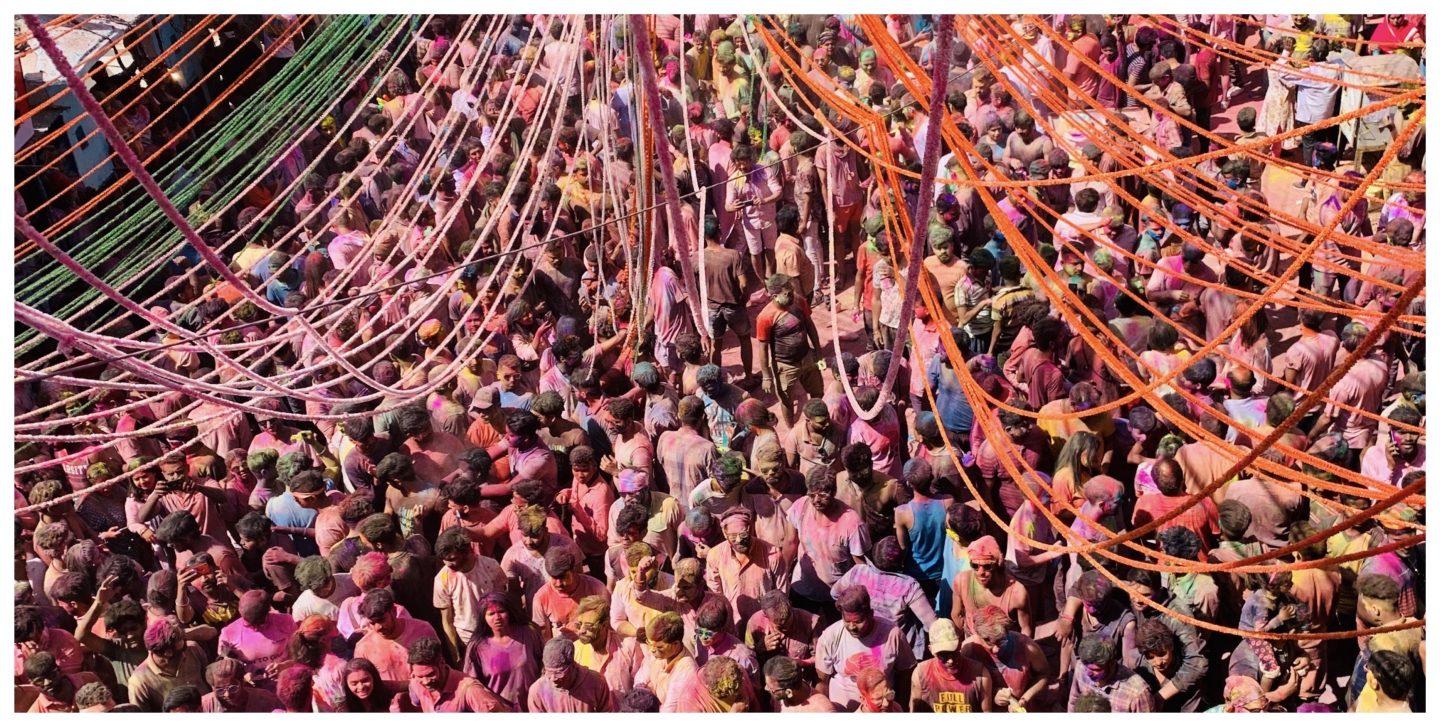 Around 3 pm the police stopped the celebration, so we made our way back to the hotel to clean up. Back on our way to the hotel, we saw a lot of people who were still dancing to trance music and making problems with the police.

The rest of the day we relaxed in our hotel.

For us, it didn’t look like a traditional celebration but more a festival for tourists and a day where the locals can get high on bhang. We didn’t see any Indian woman getting involved, about 90 percent of the crowd was men. We talked to some other tourists (girls), they told us that some Indian men put their hands where they shouldn’t.

Our favorite part was the celebration around the bonfire, it had a nice vibe. It was fun to play with the locals and children but most of the time it felt like we were in a big night club were everyone was high. Don’t get us wrong we had a great time but we expected it to be more traditional. 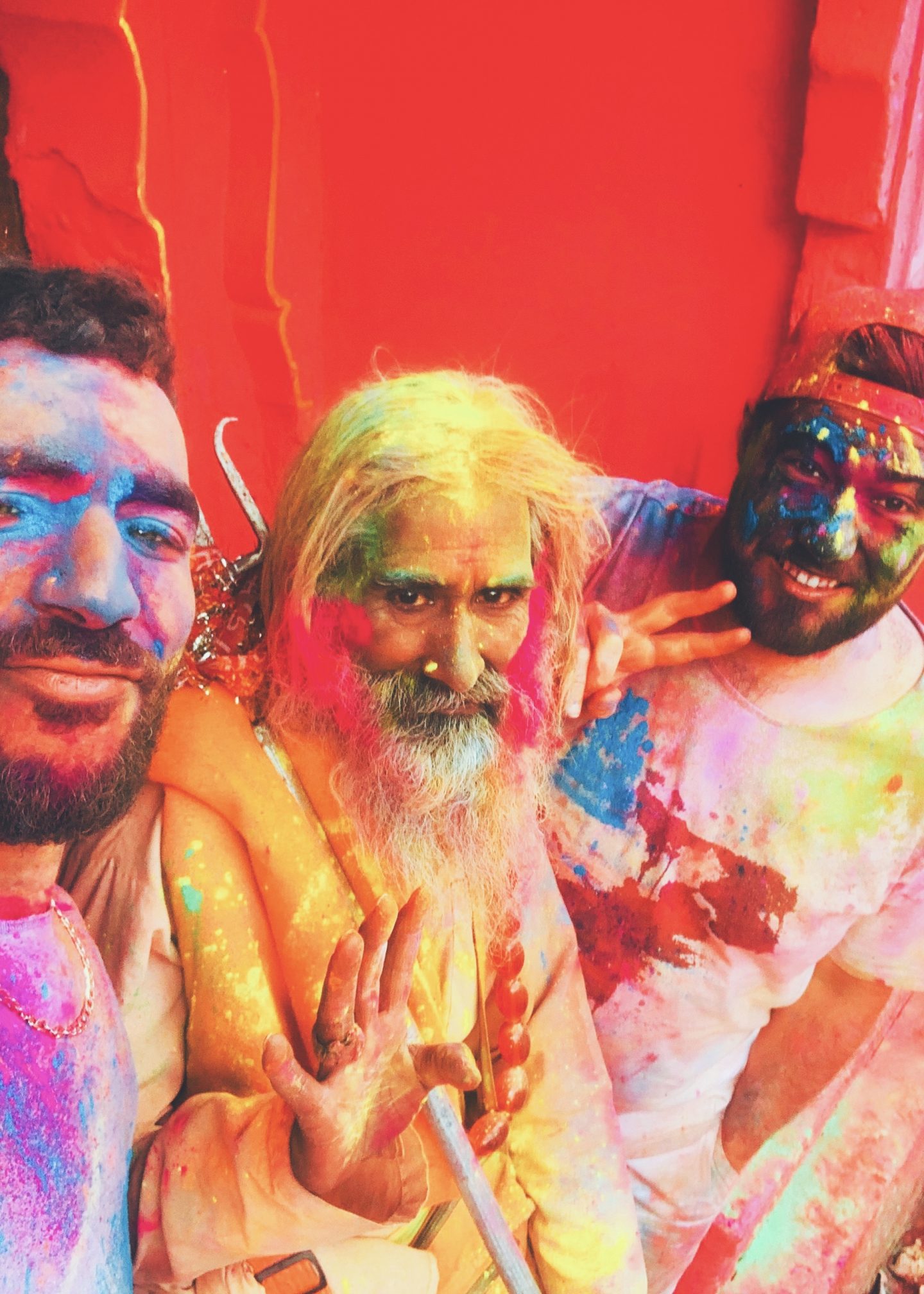 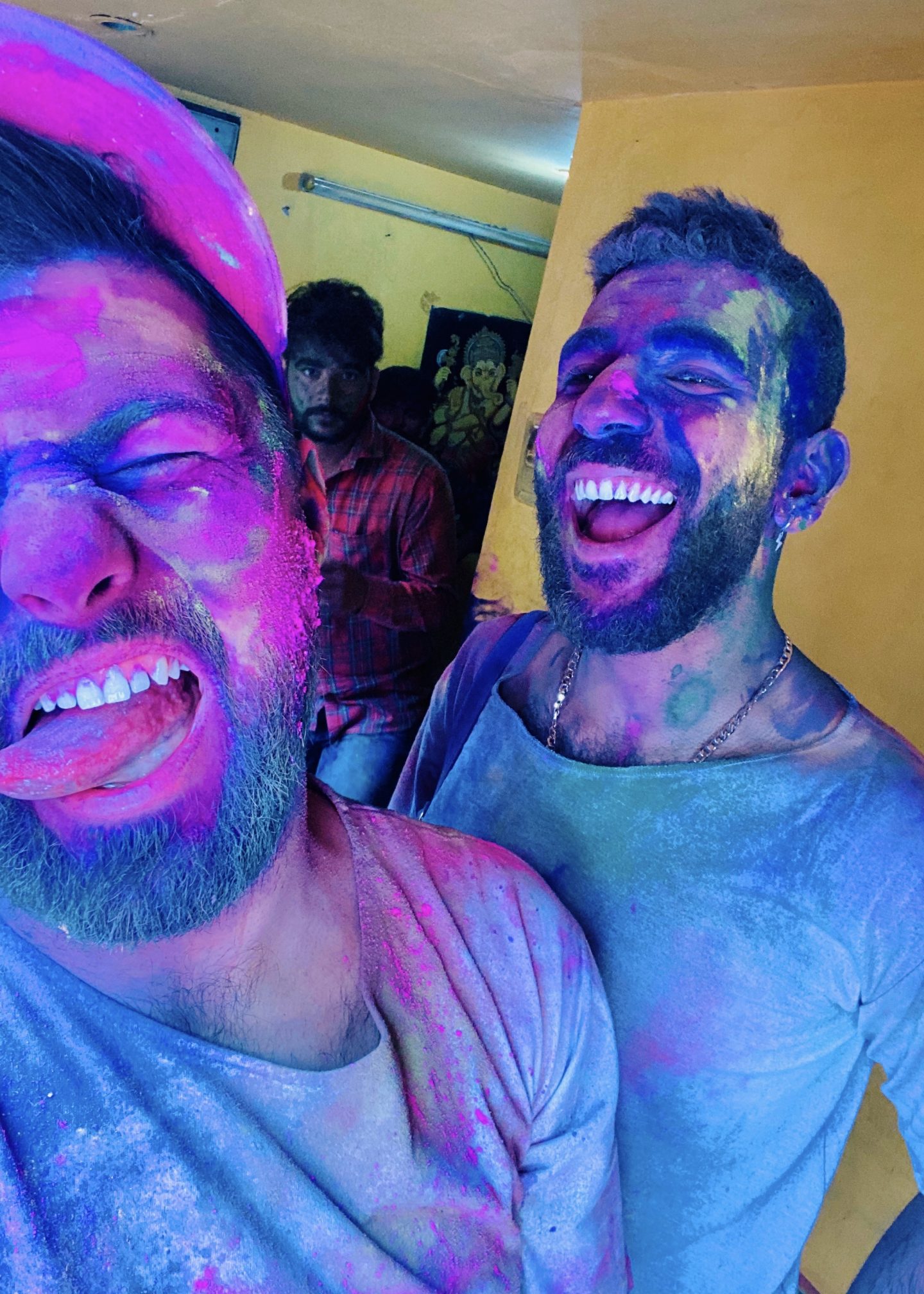 Have you ever celebrated Holi in India? What was your experience?