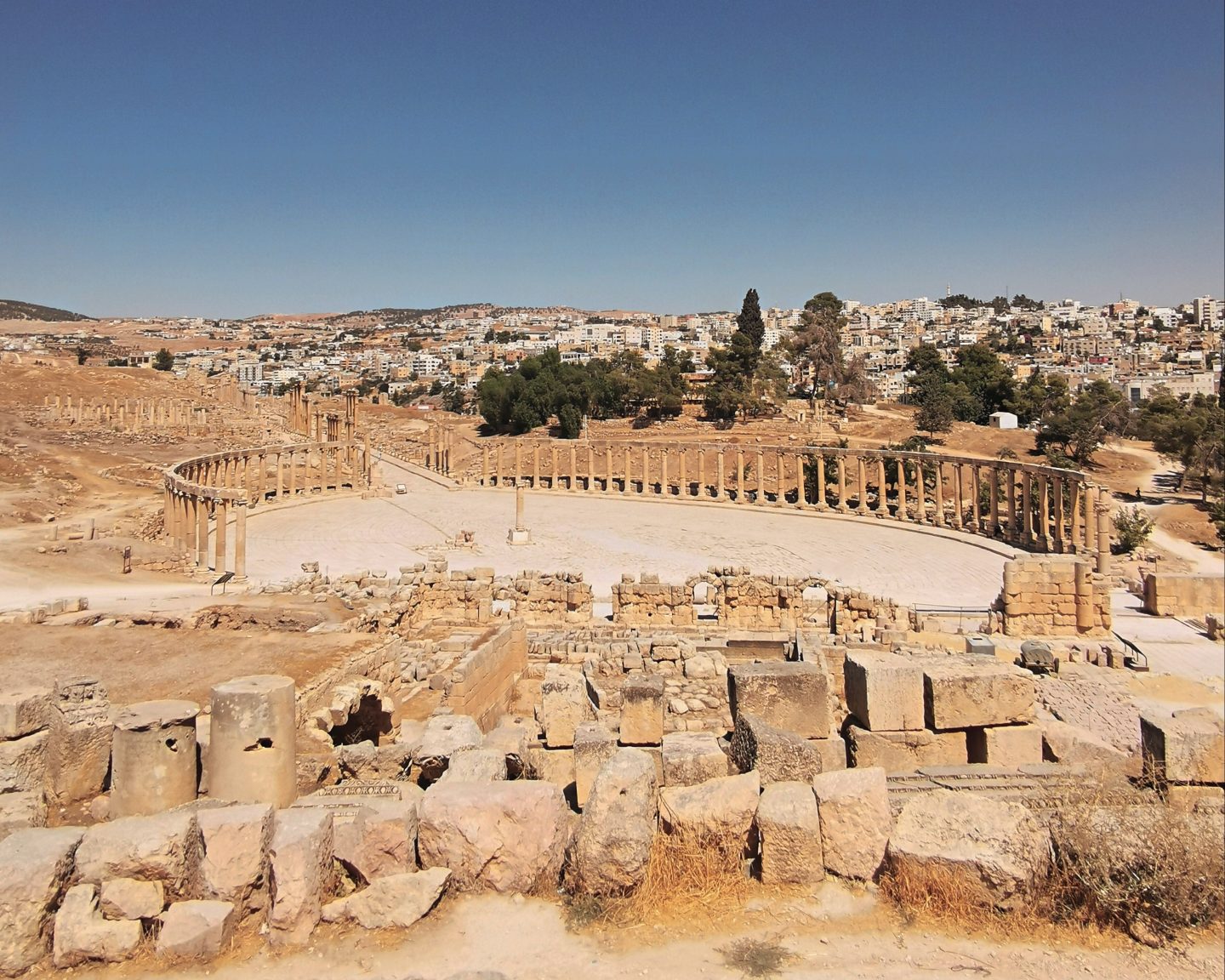 If you are traveling to Jordan, then a Jerash day trip from Amman is a must! Visiting the ancient Roman Ruins of Jerash was one of the highlights of our Jordan trip. In this post, you will find information about how to get to Jerash and what you can see there.

Jerash, located 48 km north of Amman and nestled in a quiet valley among the mountains of Gilead, is one of the largest and most well-preserved sites of Roman architecture in the world outside of Italy. To this day, its paved and colonnaded streets,  temples, theaters, plazas, baths, fountains, city walls, and gates remain in good condition.

The earliest known inhabitants of this area named the village, Garshu. The name was then turned into Gerasa and later, Jerash. Jerash began to grow from a small village to a thriving city during the 4th century BC under the rule of Alexander the Great. It was conquered by General Pompey in 63 BC and under Roman rule, it was named one of the great Roman cities of the Decapolis League.

During its prime, Jerash may have had a population close to 20,000. But during the 3rd century, the city suffered from earthquakes. Soon, it was abandoned.

The ancient city of Jerash was hidden for centuries, buried under the sand. It was rediscovered in 1806 by a German traveler, Ulrich Jasper Seezten. 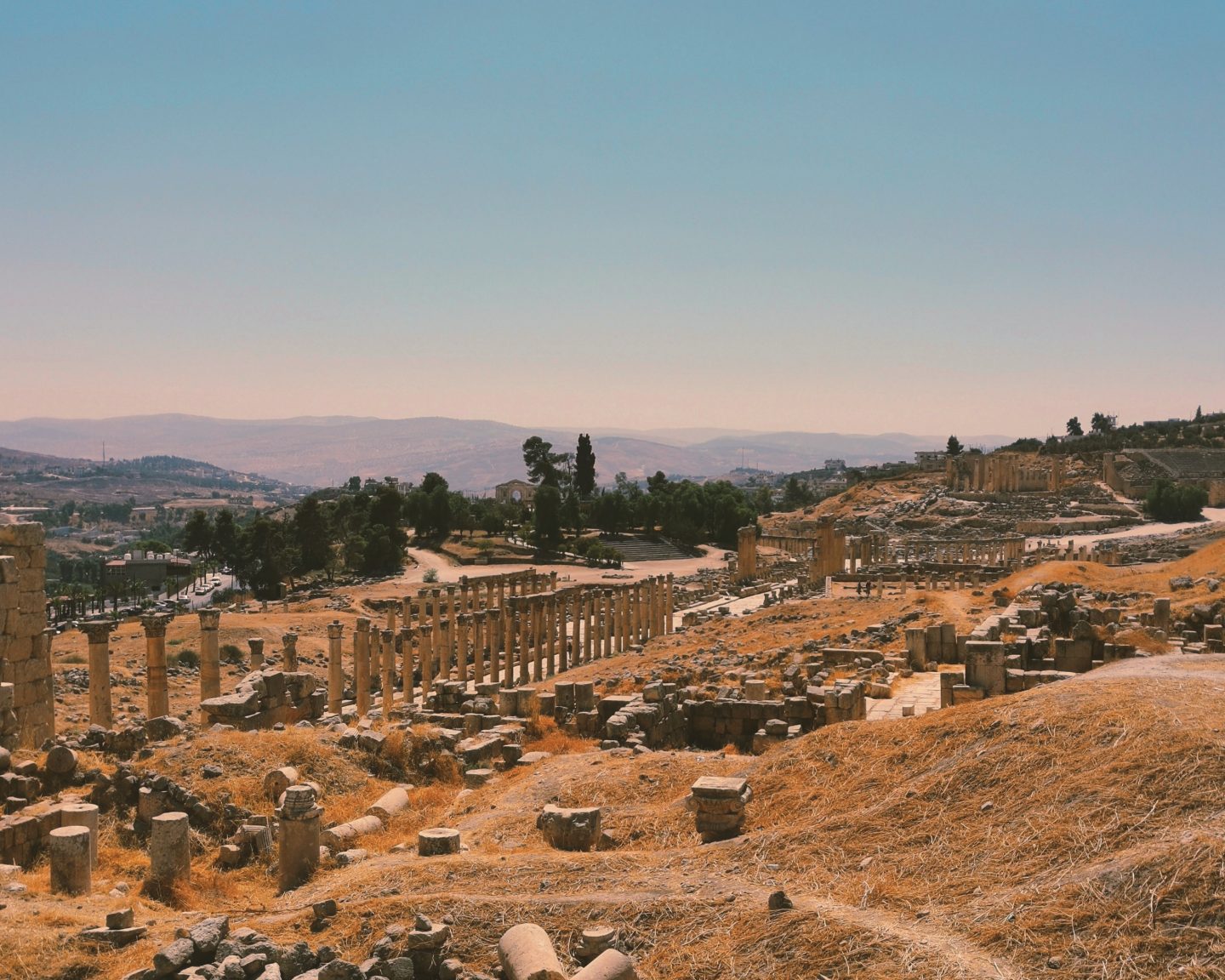 What to see in Jerash

This magnificent gateway to Jerash is 13 meters high but it was originally twice this height when built in 129 AD. The Roman Emperor Hadrian visited the city of Jerash in 129 AD, the citizens built this massive arch to honor his visit. 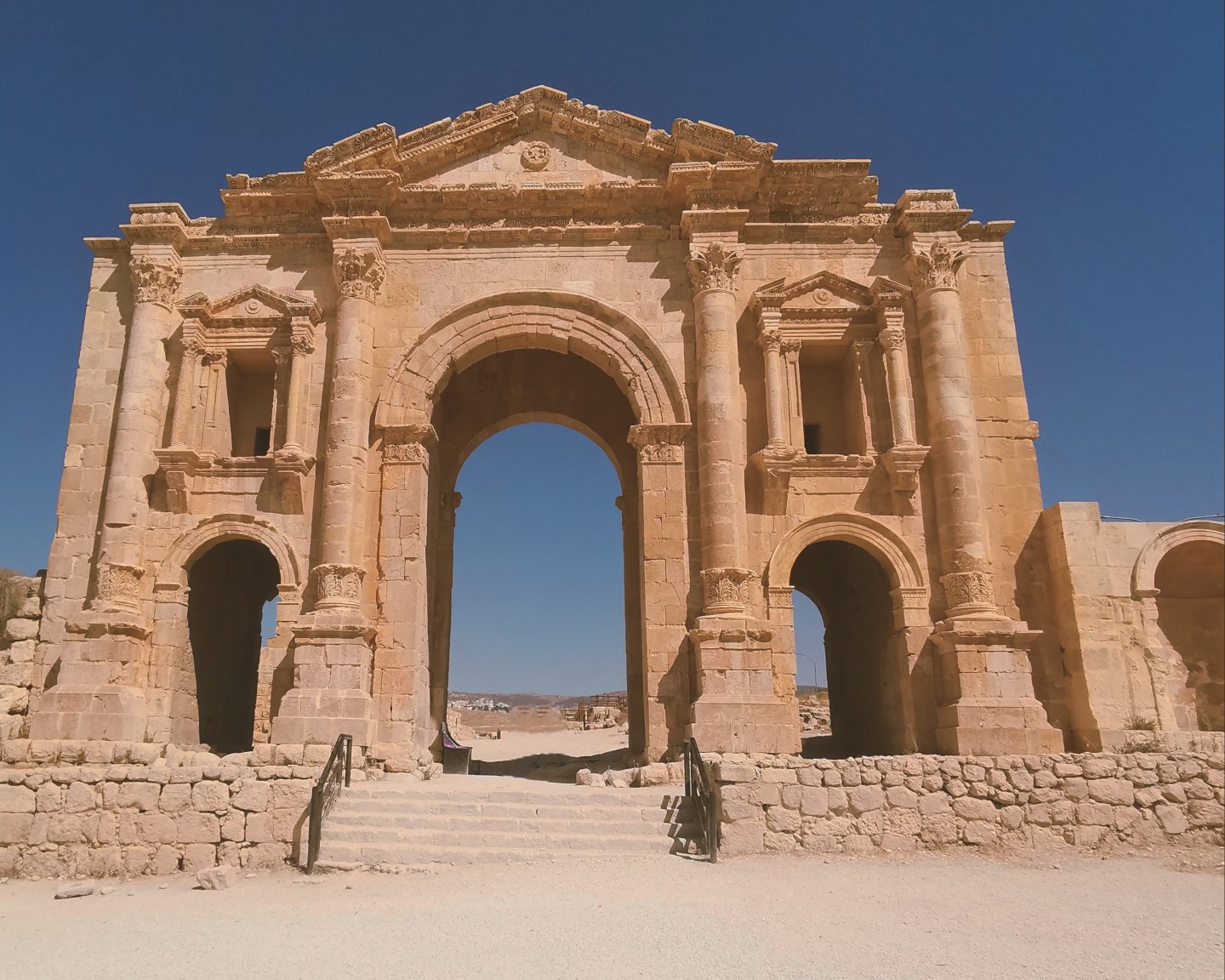 Behind the arch is the Hippodrome. Constructed between the 1st and 3rd centuries AD, this ancient sporting arena was once able to house around 15,000 spectators and hosted gladiator fights and chariot races.

Constructed in 130 AD and originally served as one of four entrances along the city walls. The visitor center is on the right before the gate; here you can get information, maps, and hire a guide if you want. 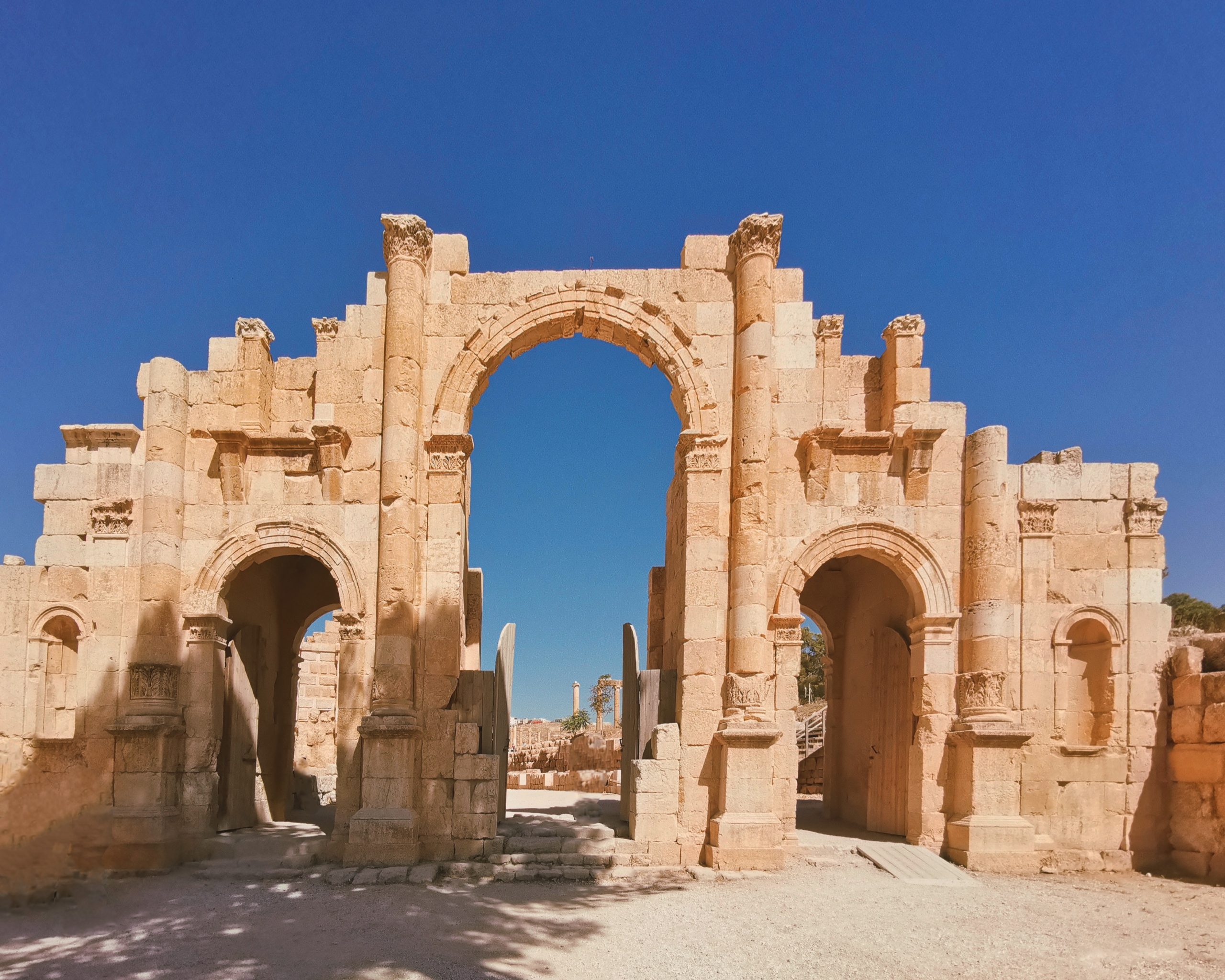 The Oval Plaza constructed in the 1st century AD is one of the most impressive squares of antiquity. This immense square (90m long and 80m at its widest point) lies in the heart of the city, linking the main street (Cardo Maximus) with the temple of Zeus. The Oval Plaza is surrounded by 56 Ionic columns. The Plaza itself is just as spectacular, paved with high-quality limestone slabs. It served as a marketplace and the place for social and political events. 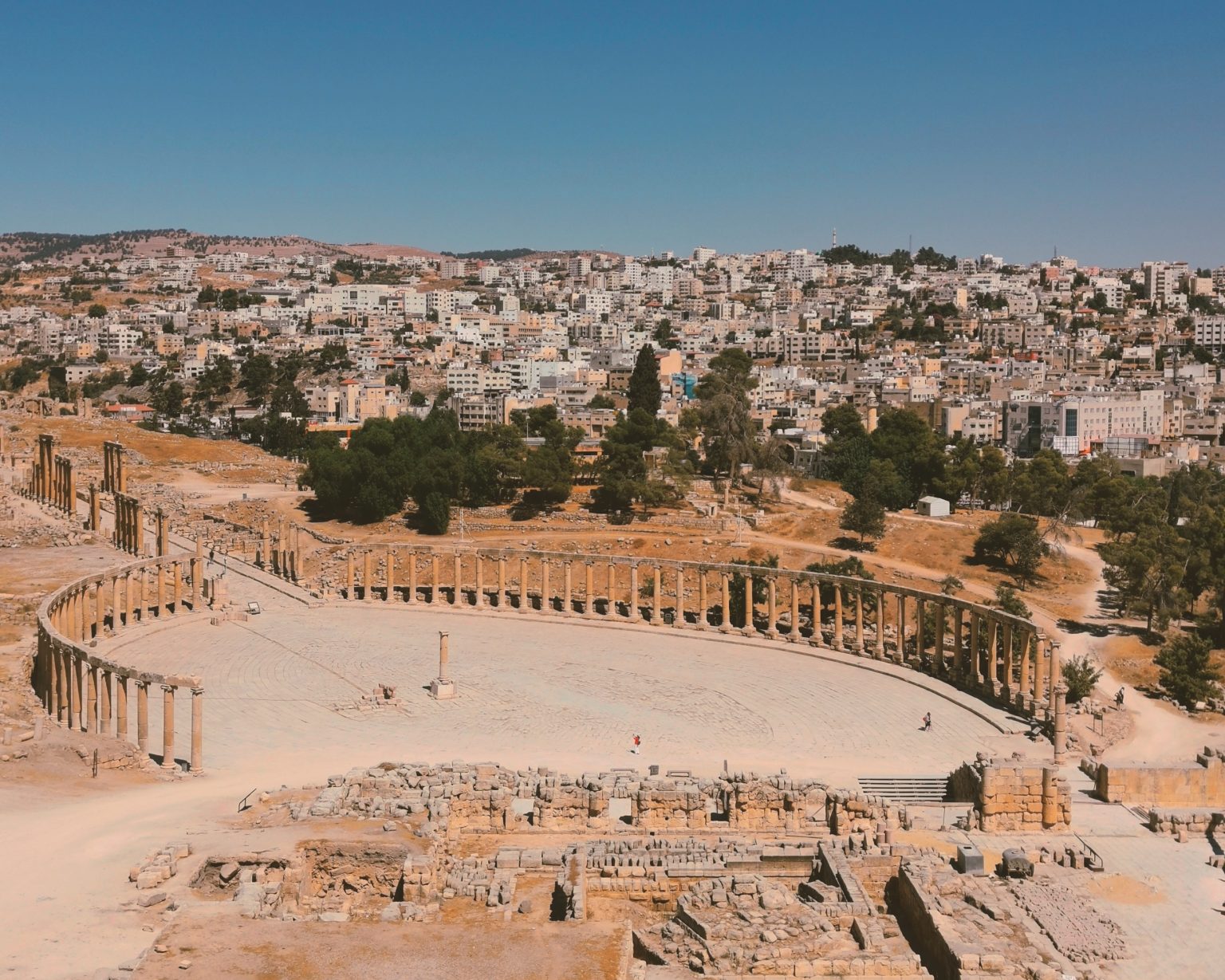 The Cardo Maximus was the main street of Jerash, it’s a wide street with columns on either side. The 800-meter-long street connects the Northern entrance Gate with the Temple of Zeus in the South. This used to be the place where the inhabitants did their shopping at shops and market stalls. Along this road, you will see some churches, the nymphaeum, and the Propylaeum. 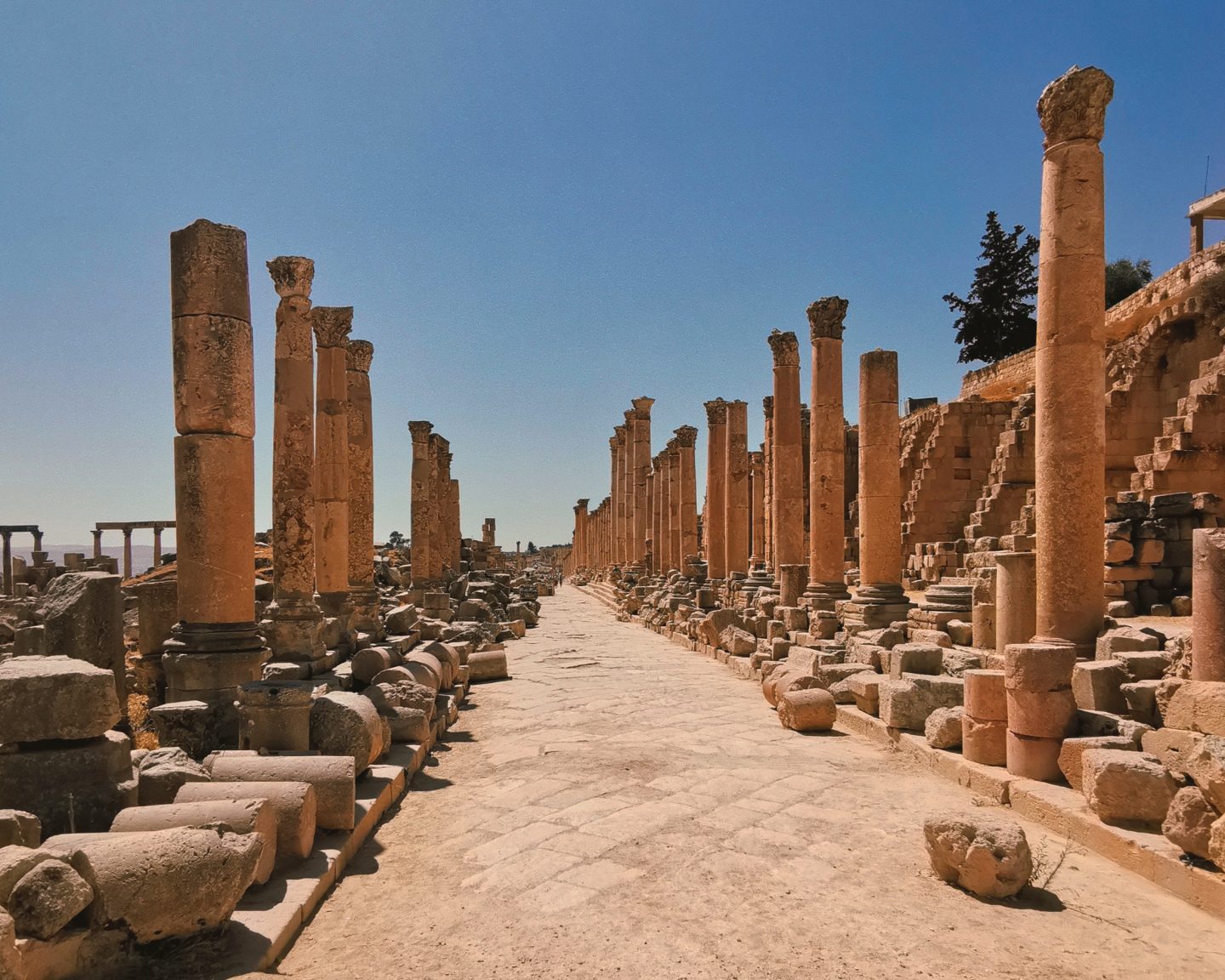 The Nymphaeum is the main ornamental fountain of Jerash, dedicated to the water nymphs. Built around 191 AD, the two-story construction was decorated with marble slabs on the lower level, plastered above, and topped with a half dome. Water cascaded into a large pool at the front, with the overflow pouring out through seven carved lions’ heads. 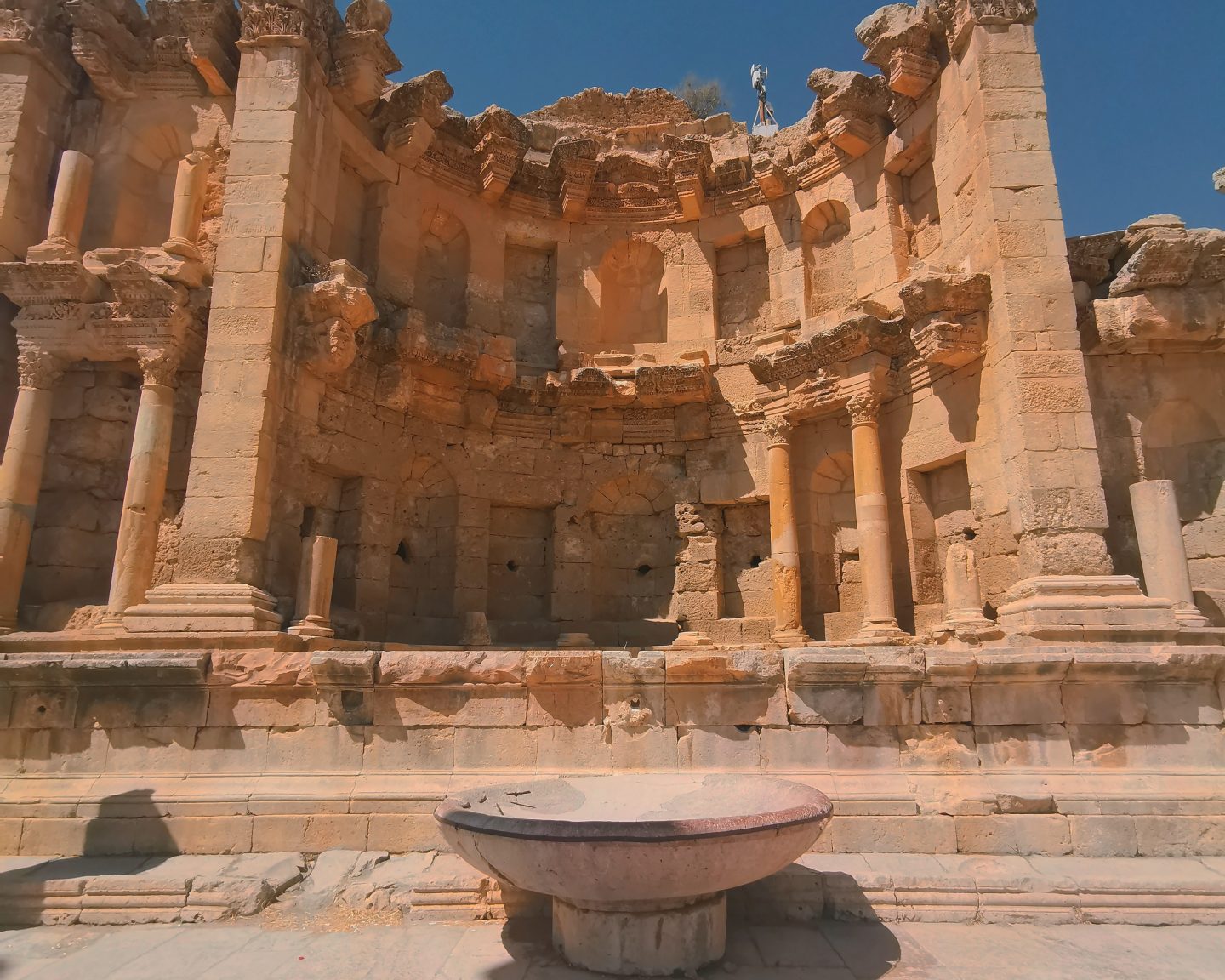 The Propylaeum built around 150 AD is the monumental gateway to the Temple of Artemis. It was originally flanked by shops. 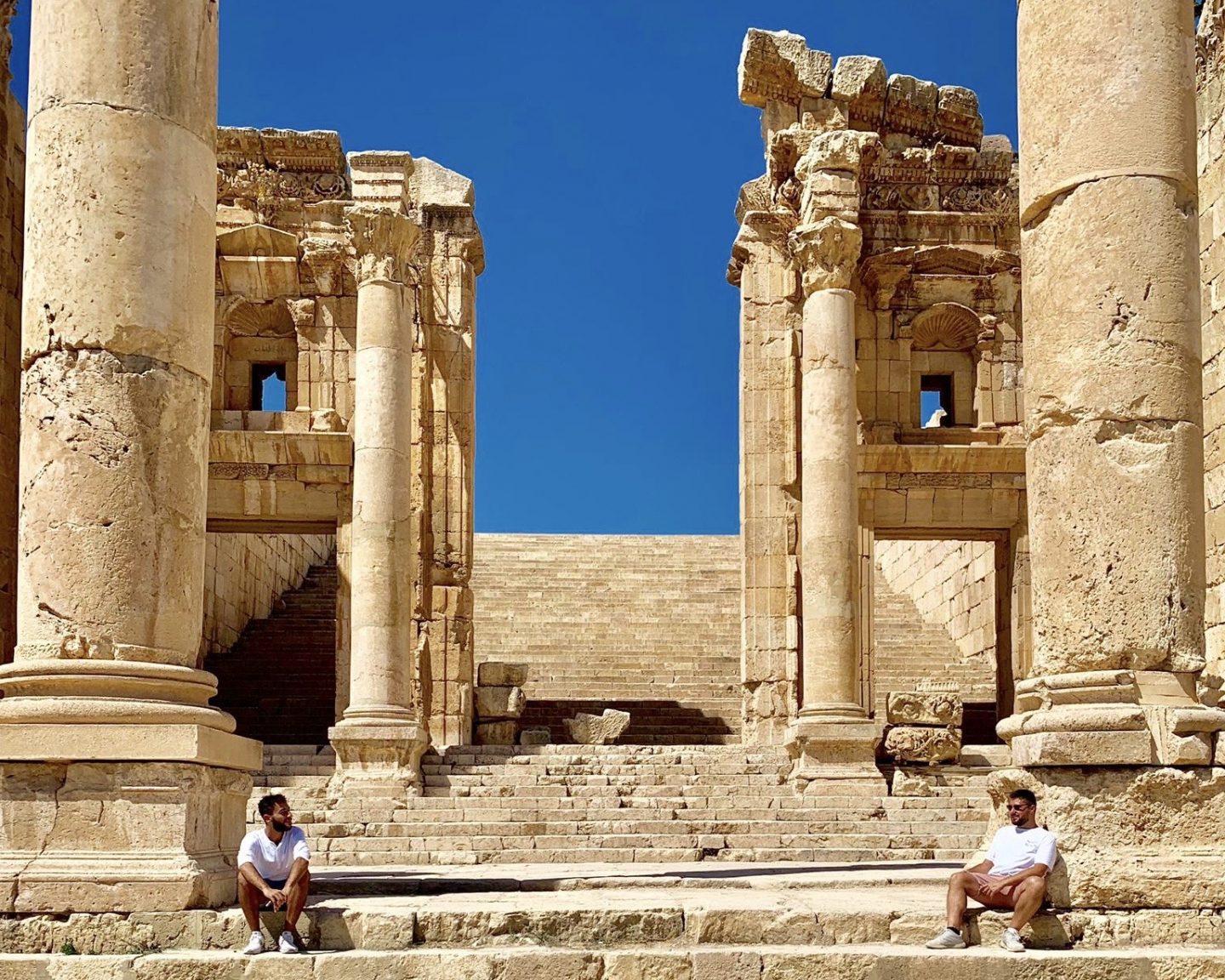 Built around 165 and enlarged in 235, the beautiful little North Theatre was used for government meetings rather than artistic performances. Originally it had 14 rows of seats, with two vaulted passageways leading to the front of the theatre, as well as five internal arched corridors leading to the upper rows. Many of the seats are inscribed with the names of delegates who voted in the city council. 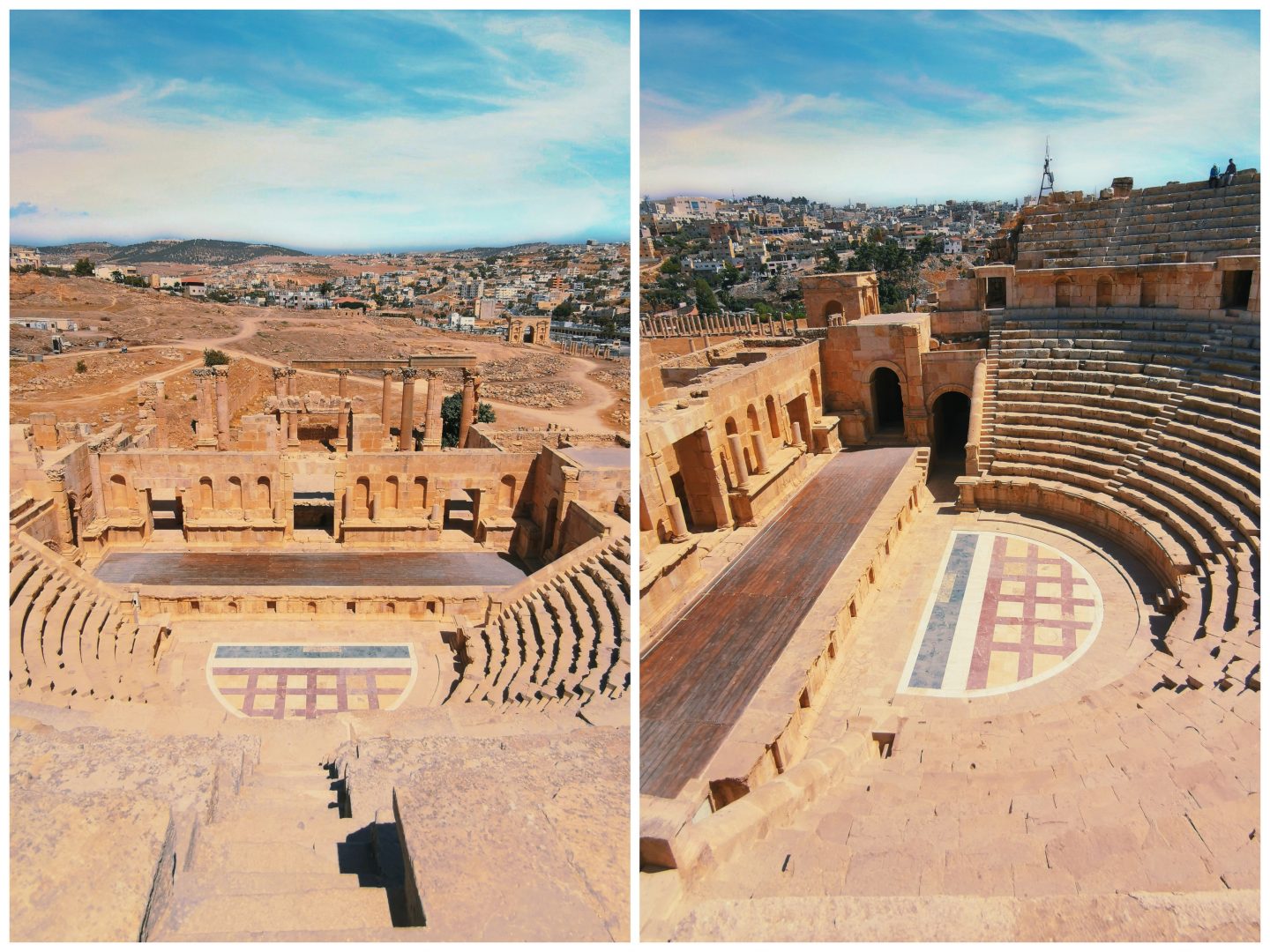 This temple built between 150 and 170 AD is dedicated to Artemis, the goddess of hunting and fertility, and the daughter of Zeus and Leto. The temple stands out for its size and can be seen from all over the city due to its location on a hill. Due to earthquakes and weather conditions, the temple is now a ruin, but the most striking part is still intact: of the twelve meter-high columns, eleven are still standing. 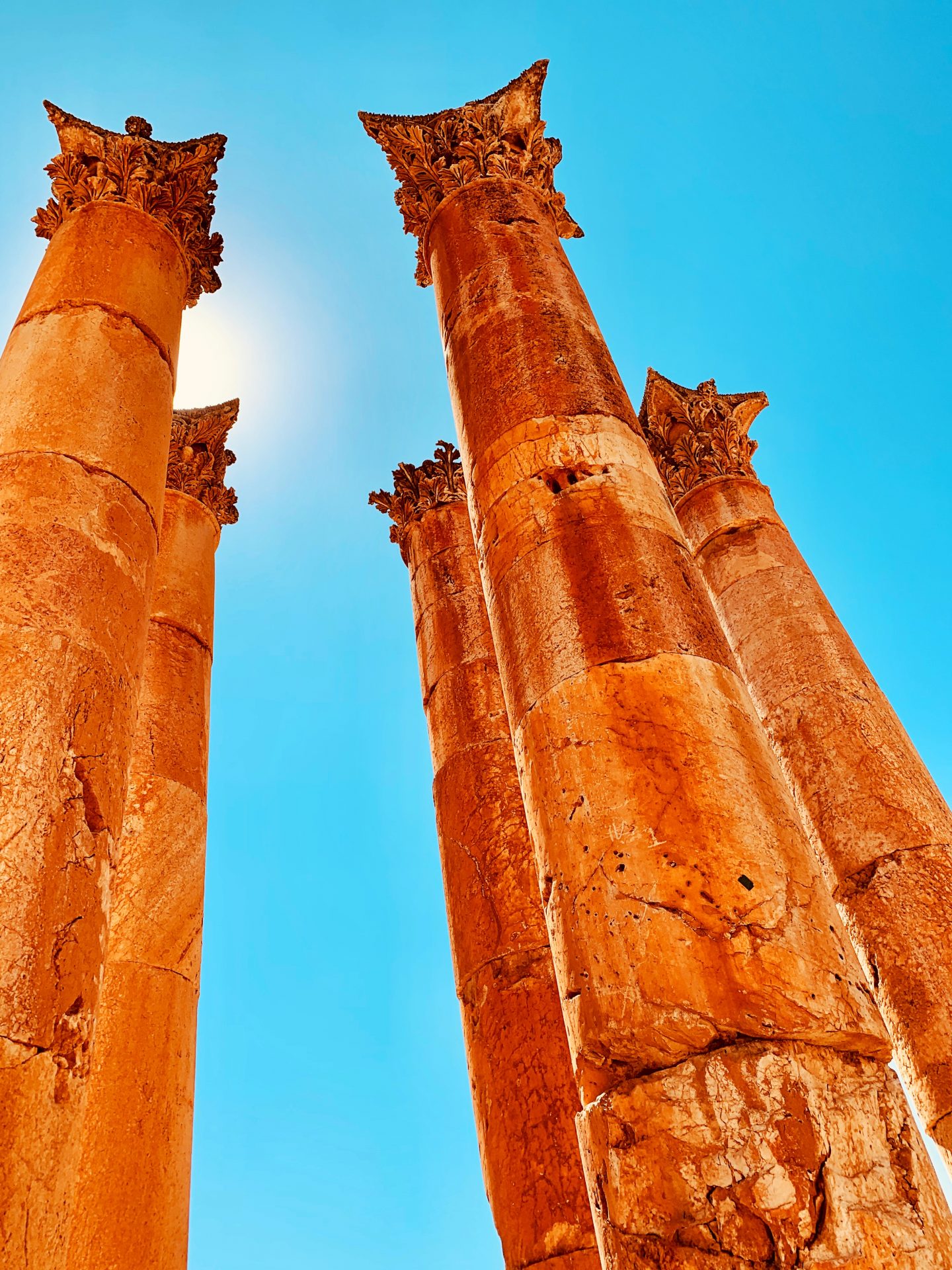 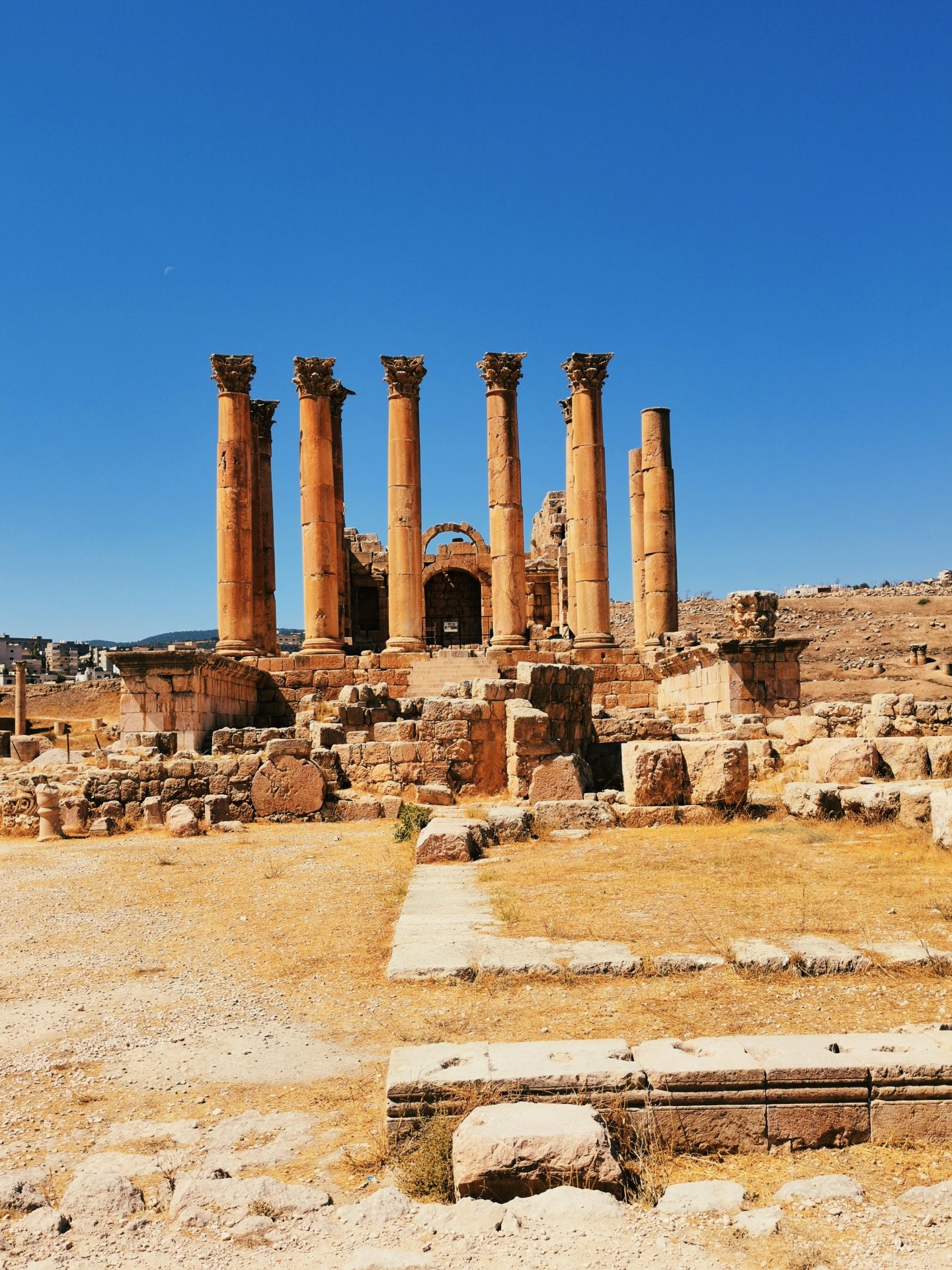 So far 15 churches from the Byzantine era have been found in Jerash, but it is expected that many more treasures are hidden under the sand. The church of St. George, St. John the Baptist, and St. Cosmas en St. Damian are worth visiting. These churches date from the same period. You will see beautiful mosaic floors that are typical of the Byzantine architectural style. 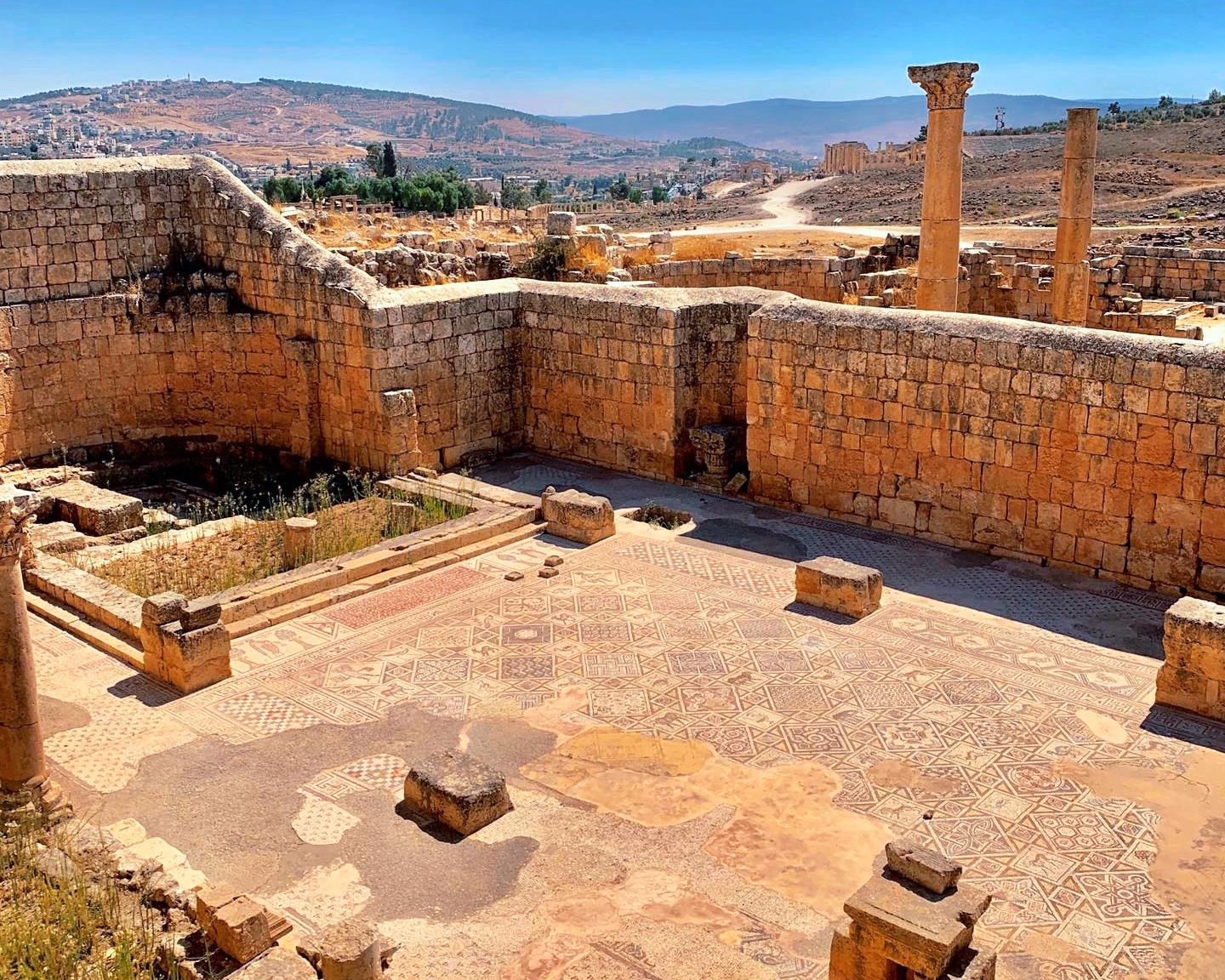 Built during the reign of Emperor Domitian, between 90-92 AD, the South Theatre can seat more than 3,000 spectators. The 1st level of the stage, which was originally a two-story structure, has been reconstructed and is still used today. The theatre’s remarkable acoustics allow a speaker at the center of the orchestra floor to be heard throughout the entire auditorium without raising his voice. Two vaulted passages lead into the orchestra, and four passages at the back of the theatre give access to the upper rows of seats. 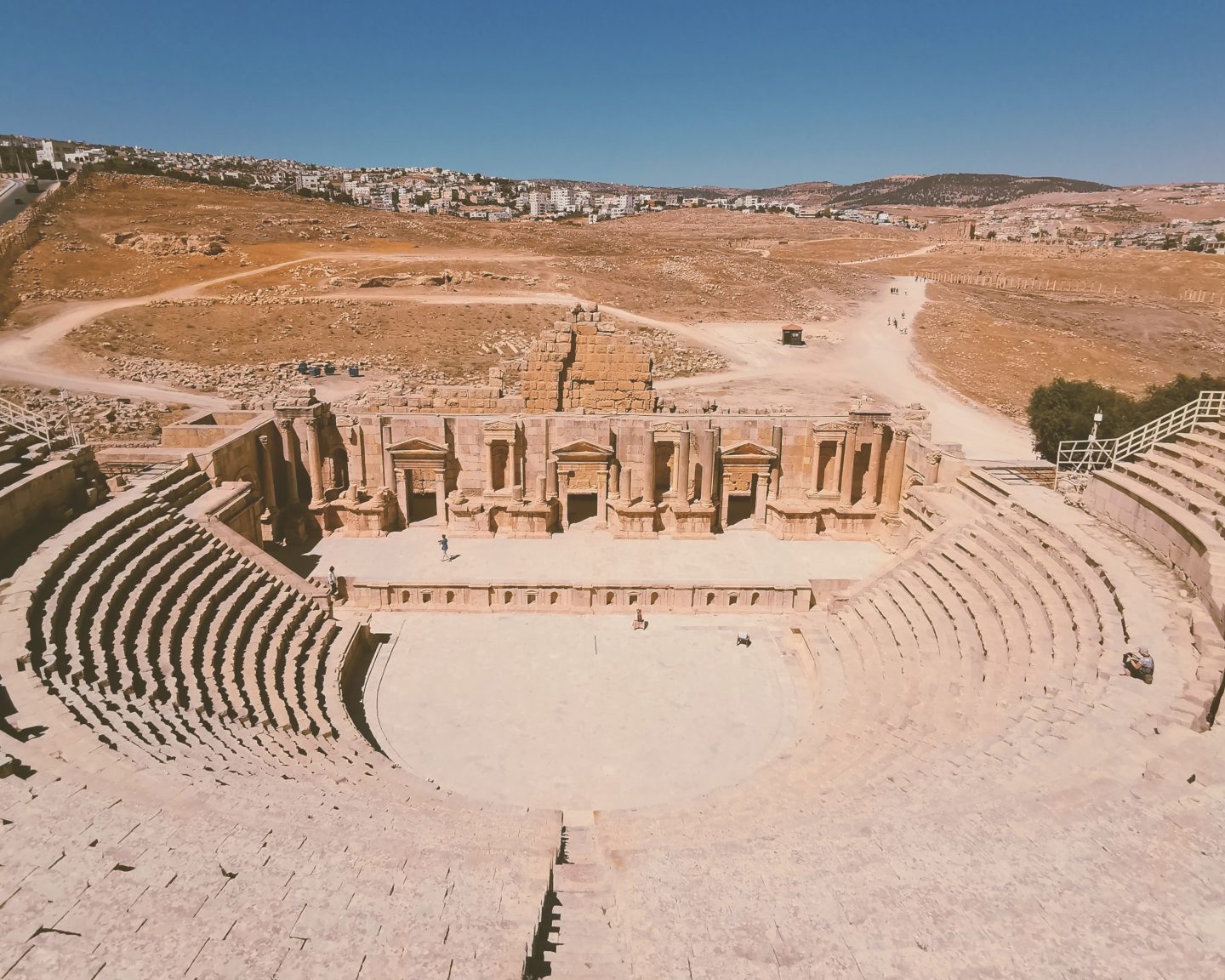 Built-in 162 AD over the remains of an earlier Roman temple, the Temple of Zeus was once approached by a magnificent stairway. Positioned on a  hill, the temple towers above the city. Despite erosion and earthquakes, enough of this once-beautiful building remains to allow us to understand its former importance. From here you have an amazing view over the Oval Plaza. 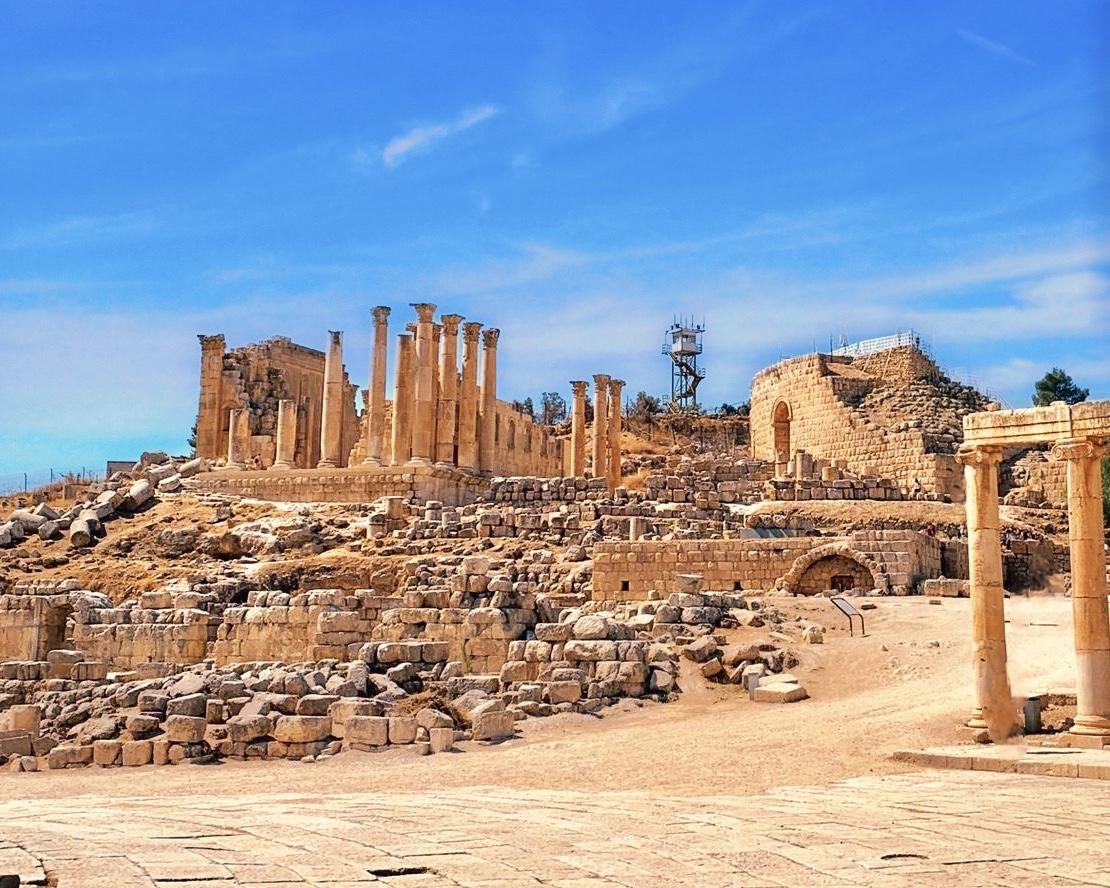 A visit to Jerash takes about three to four hours. If it is very hot, it is better to visit in the morning. It is not yet that warm. You hardly walk anywhere in the shade and you have to walk a lot if you want to see everything!

The easiest way to get to Jerash is by taxi or Uber from Amman, this takes about 1 hour. The cheapest option is going to Jerash by bus (which we did). Take a taxi in the city center to Amman North Terminal Bus Station. From there you can take a bus to Jerash. The price should be between 3 to 5 JD per taxi ride, and the bus charges 1 JD per person on each one-way trip. Know that the bus only leaves when all seats have been taken. This can take a long time, we waited for 40 minutes. 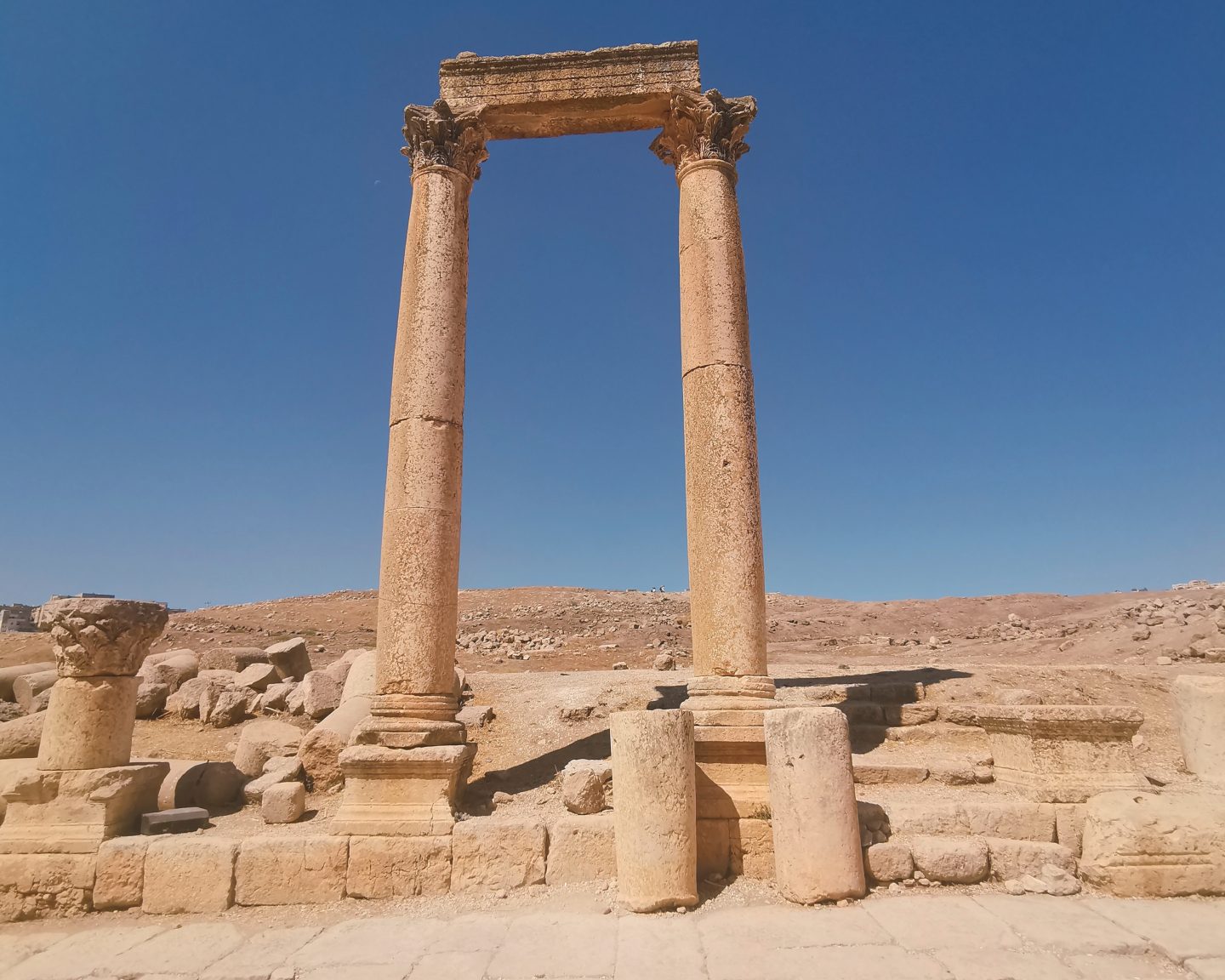 Have you ever visited Jerash? Which sites are your favorite? Let us know in the comment section below.