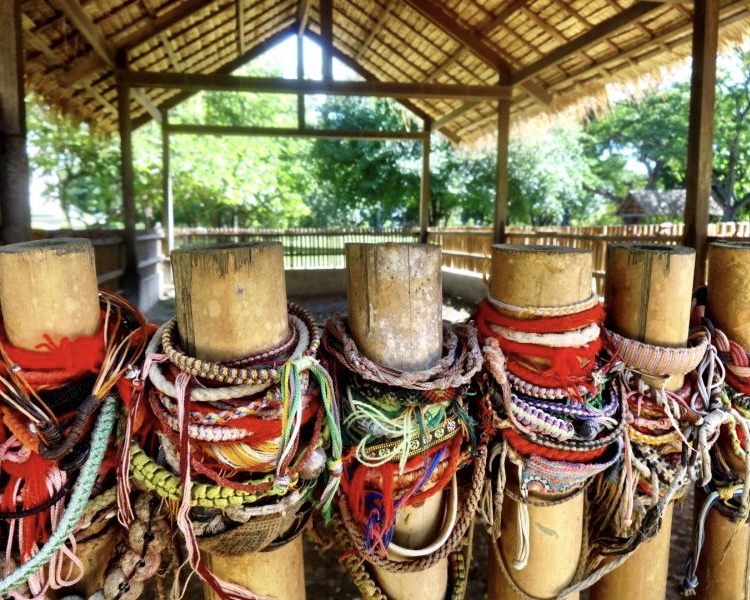 Most travelers go to Cambodia to visit Angkor Wat and to relax on the beautiful beaches which we did too. But we couldn’t visit Cambodia’s main attractions without learning about it’s recent and brutal history.

The Khmer Rouge was one of history’s most horrific regimes; over a period of four years, they killed a quarter of Cambodia’s population (around 3 000 000 people), under dictator Pol Pot’s mission to create an agrarian society. The Khmer Rouge emptied the cities and send people to work in the fields at harsh labor camps. Education and independent thought were outlawed. And anyone viewed as too much of a risk to the new order was taken away, tortured and killed. Why were these people selected? What did they do wrong? The answer is simple. The Khmer Rouge murdered anyone who might be smart enough to question Pol Pots’ plans. People were targeted for wearing glasses, having smooth hands, or anything that signified they had a desk job, could read, or be intelligent enough to question his vision. Pol Pot believed that it was better to kill innocents than to miss an enemy. Hundreds of thousands of the educated middle-classes were tortured and executed in special centers. Hundreds of thousands of others died from diseases, starvation or exhaustion as members of the Khmer Rouge forced people to do back-breaking work. 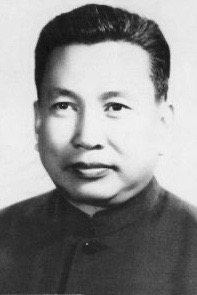 Over the span of 4 years, the Khmer Rouge gathered up millions of people, usually educated ones, and send them to “new houses or training centers”. These were just code names for killing fields or special centers. The most notorious of these centers was the S21 prison in Phnom Penh. Tuol Sleng was a secondary school before the Khmer Rouge took power. They transformed the school into a prison; classrooms were divided into small cells, interrogation, and torture rooms. Coils of electric barbed wire were placed along the high walls to make sure no one could escape, and iron bars covered the windows. Around 20 000 people were imprisoned during the time the regime was in power. 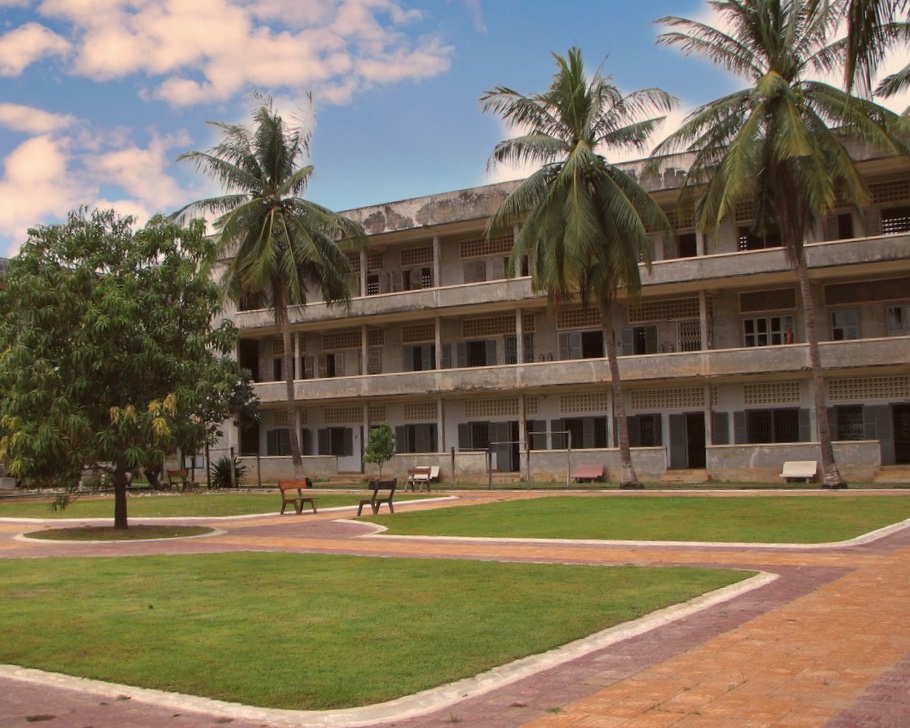 The prisoners would be kept here in appalling conditions and interrogated regularly. Why? To get them to name names, the family members, people they worked with,… The guards would promise there release and a new life at a “new house” if they talked. Once they did (or didn’t), they were sent to the killing fields or were tortured until they died. Many would lie and say anything just to put an end to their suffering. Out of an estimated 20 000 people imprisoned at Tuol Sleng, there were only twelve known survivors 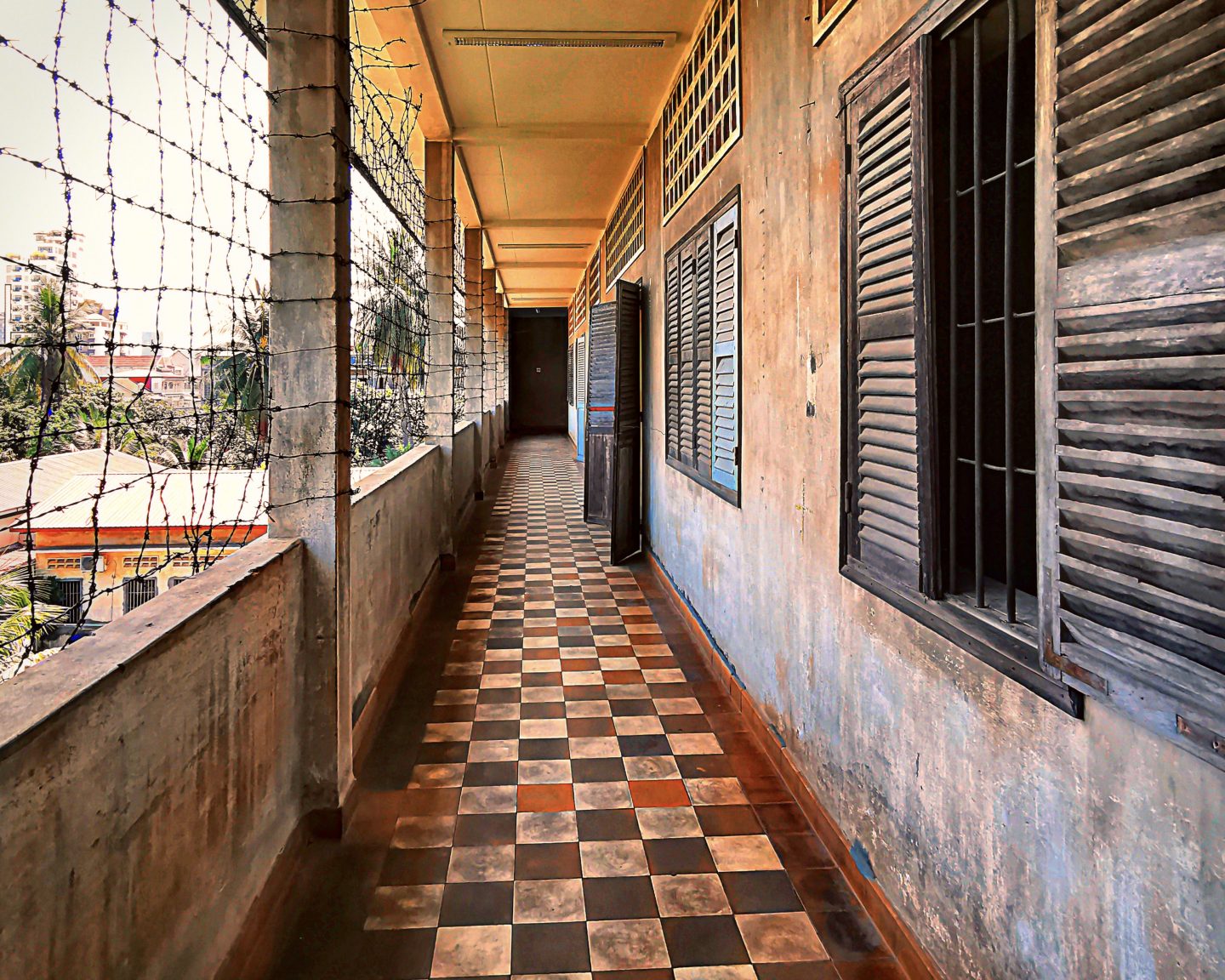 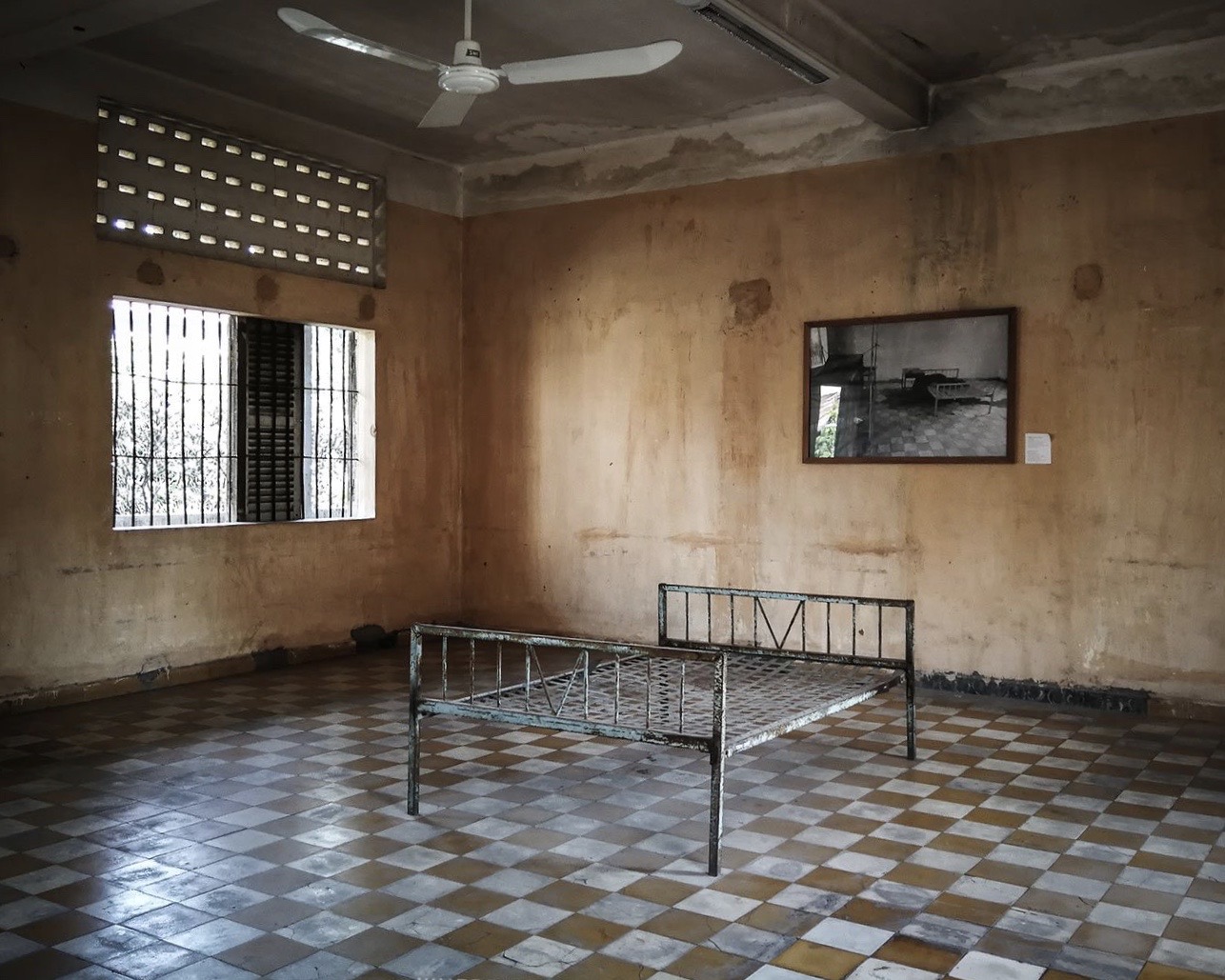 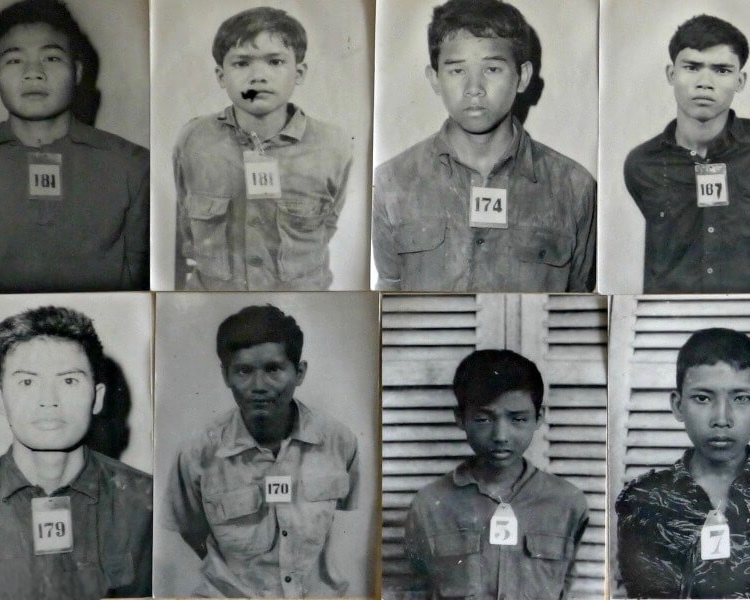 Visiting the Tuol Sleng Museum wasn’t a fun activity! The detailed audio guide took us on a somber and emotive journey. As we walked through the classrooms we saw torture instruments, prison cells, a metal bed frame with chains attached, photos of prisoners on blackboards. We felt emotional and disgusted by mankind.

After our visit, we talked to Bou Meng one of the survivors of the Khmer Rouge imprisonment in the Tuol Sleng prison. He was arrested with his wife, Ma Yoeun, in 1976 and they never saw each other again after then. Bou Meng was tortured for weeks, with many kinds of torture devices and he had to fabricate confessions. He was spared from being slaughtered only because he was a highly skilled painter. His wife, according to the records of Tuol Sleng, was tortured and killed in 1977. His children ended up in a children’s center and eventually they starved to death. He can often be found at the museum selling his book that describes his time at Tuol Sleng and how he was able to survive.

The Killing Fields of Choeung Ek

Our next stop was the Killing Fields of Choeung Ek. It was here that between 1975 and 1979 around 17 000 men, women, children, and infants who had been tortured at Tuol Sleng were transported to be killed.

Upon arrival, we were given an audio tour, which featured the chilling account of Him Huy, a guard, and executioner at Choeung Ek, who took us through the happenings in this camp.

Most prisoners were executed on arrival.  As bullets were precious to the Khmer Rouge they were not “wasted on prisoners”. Victims, with their hands bound behind their backs, were led to the edge of the hollowed pits, told to kneel down, then beaten to death with spades, machetes or clubs. Some were tossed in alive, others had their throats slit, using the razor edge of plants growing nearby. Chemical substances such as DDT were sprayed over the bodies to ensure nobody remained alive. It also eliminated the stench from the dead bodies, which could raise suspicion from people working nearby. 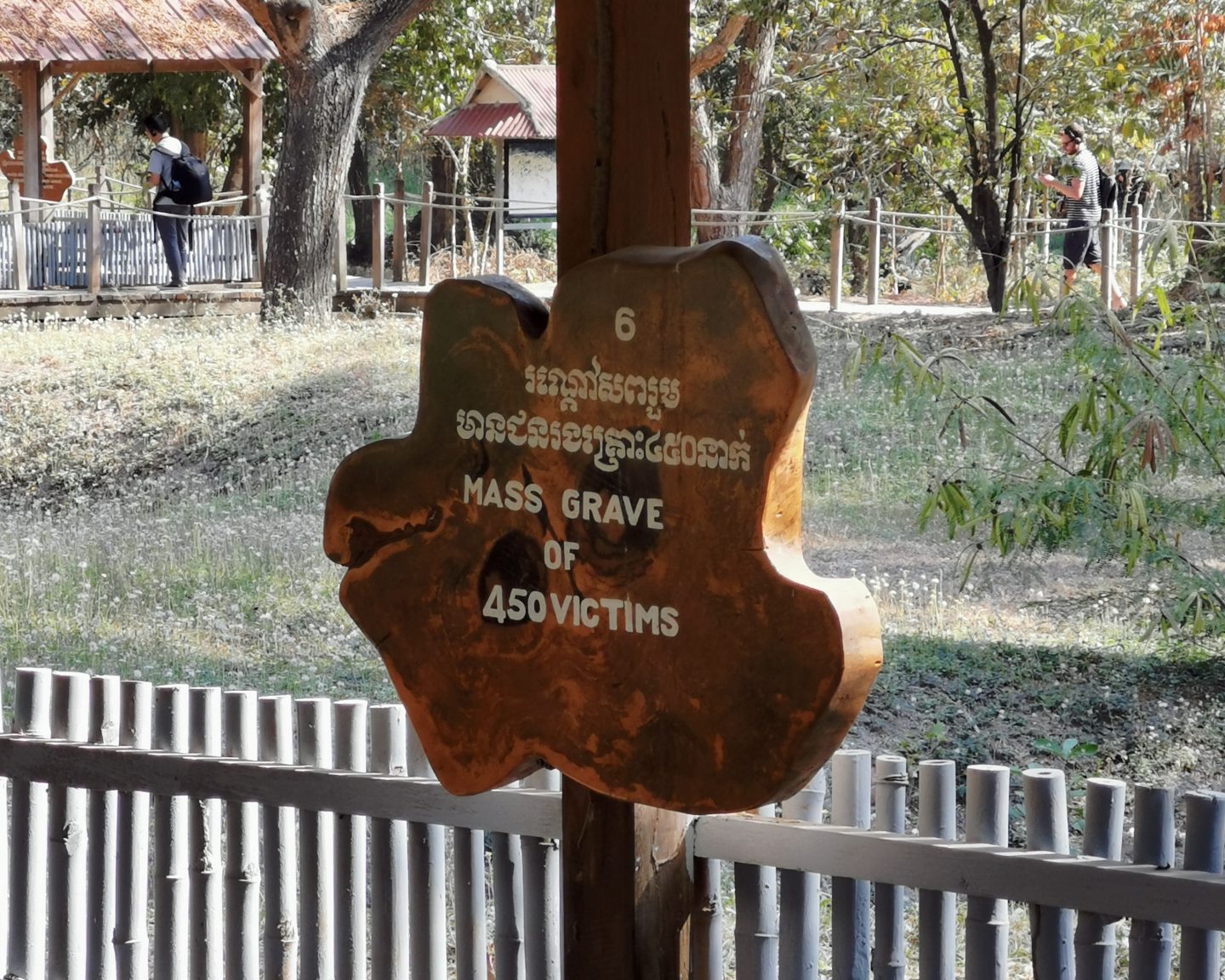 As we were walking we saw bones poking up out of the dirt, or perhaps human teeth just lying in the grass. Each time it rains here more things like bones, teeth, clothes continue to surface.

Many victims were beheaded and have been buried without heads and it’s not just men that were brutally murdered, but also woman and children. One of the most horrific things we came across was the killing tree, where infants and children were beaten to death. The woman would watch there babies be beaten against trees, and then would be raped before being killed too. When the killing fields were first discovered, there were still fragments of brain and hair stuck to the tree. 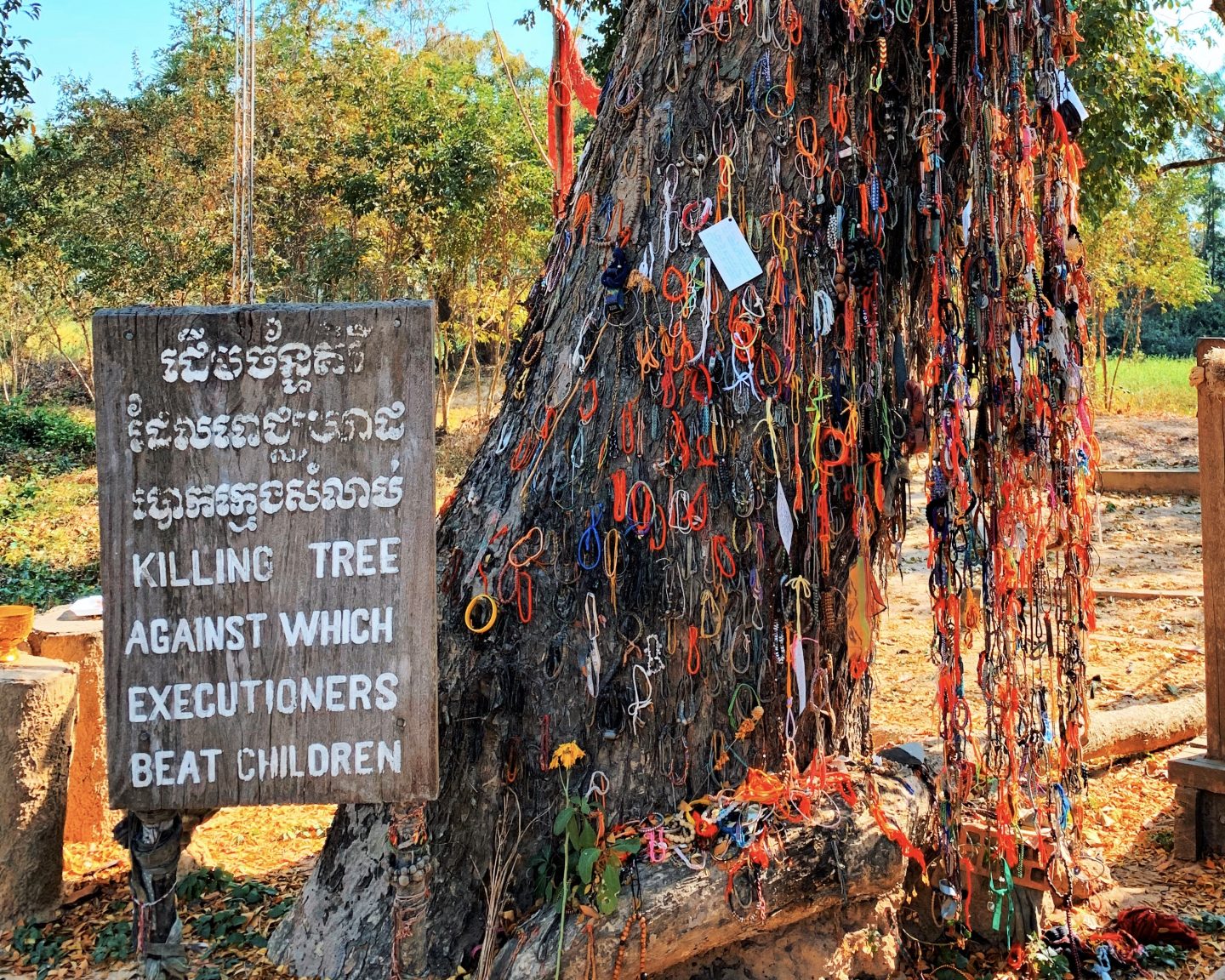 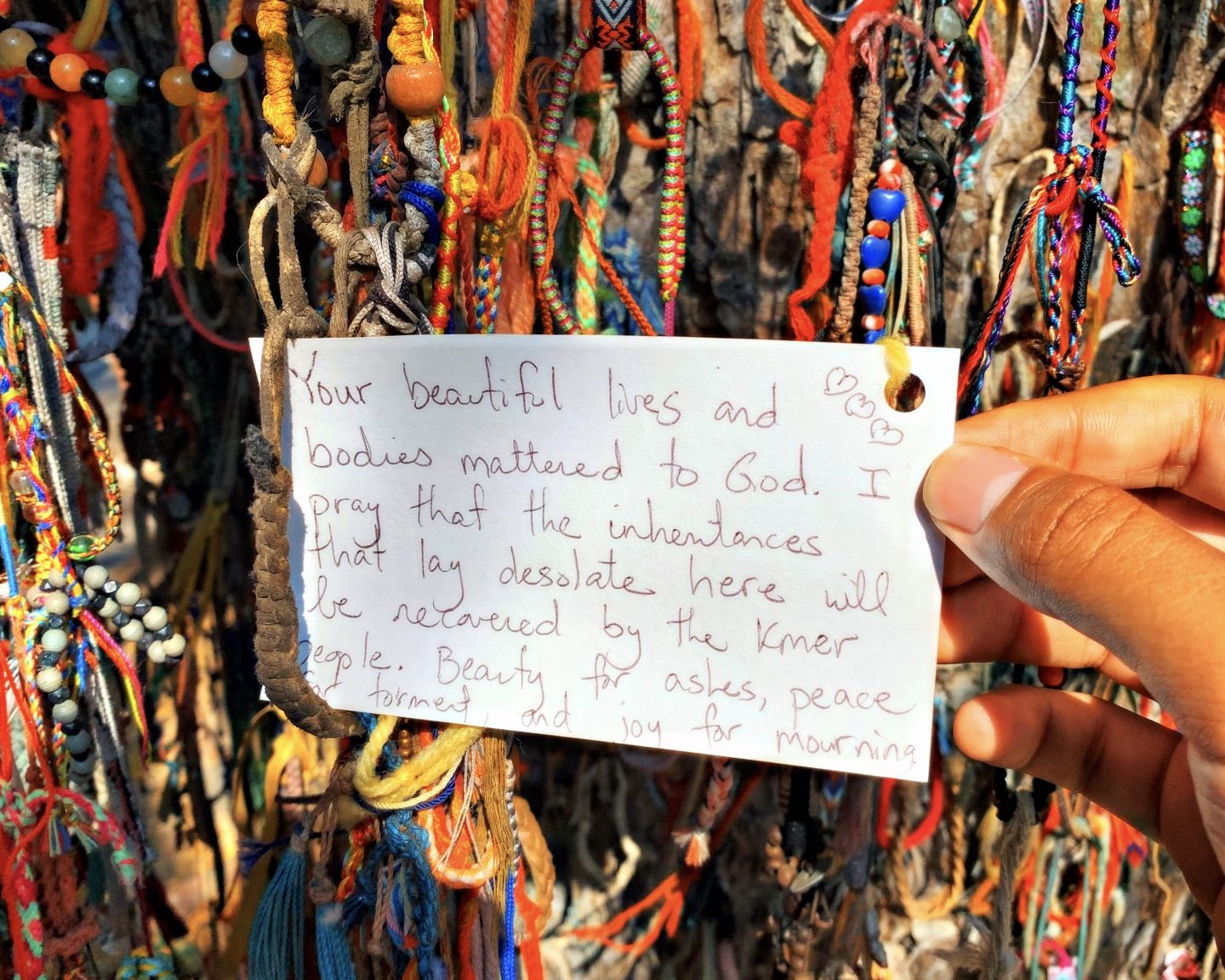 To cover the sound of the victims being beaten to death, music was played from speakers hanging from the magic tree. 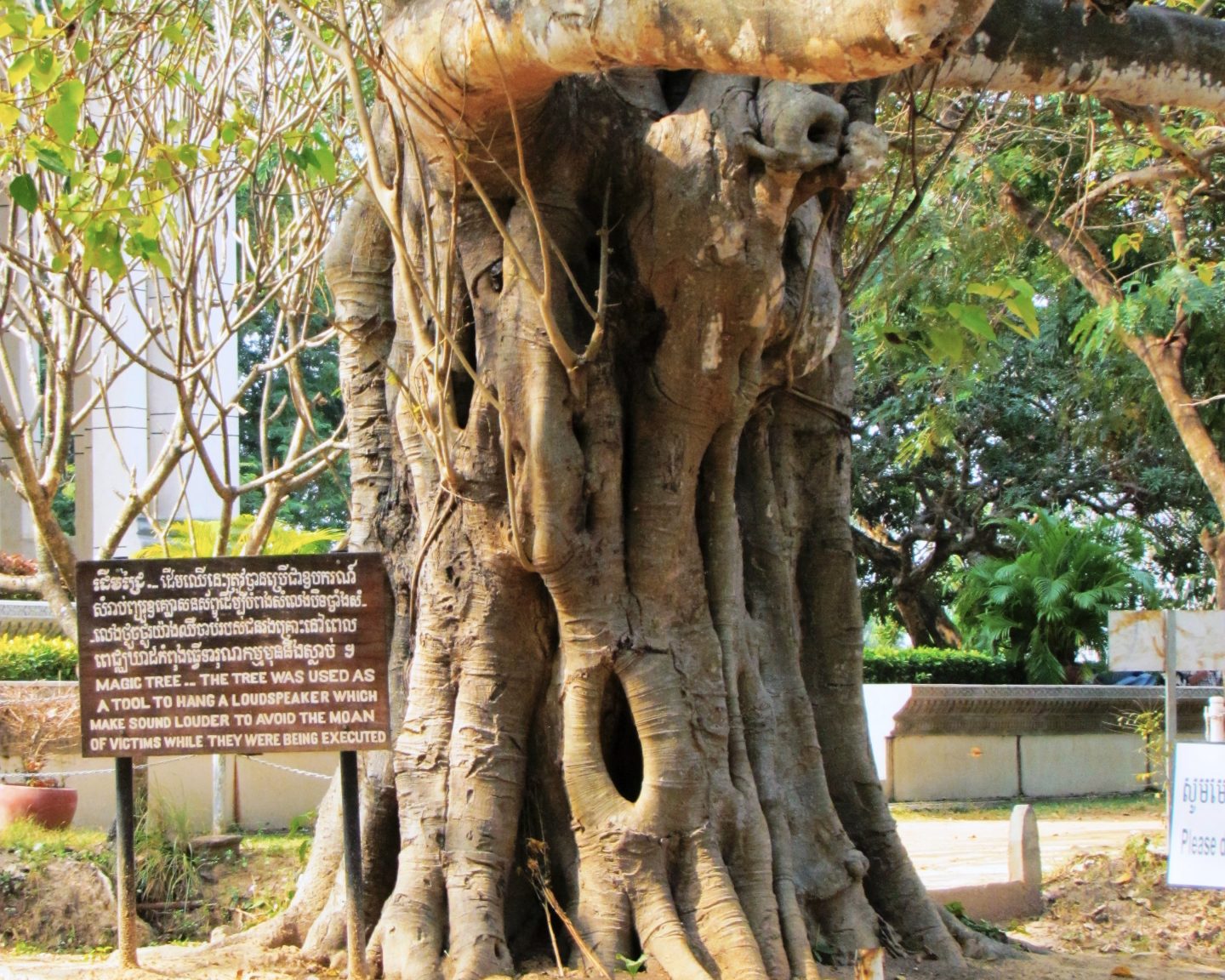 And then there is the gigantic stupa, filled with the bones of about 8000 people whose bodies were exhumed from mass graves at this site a few decades ago serves as a memorial. 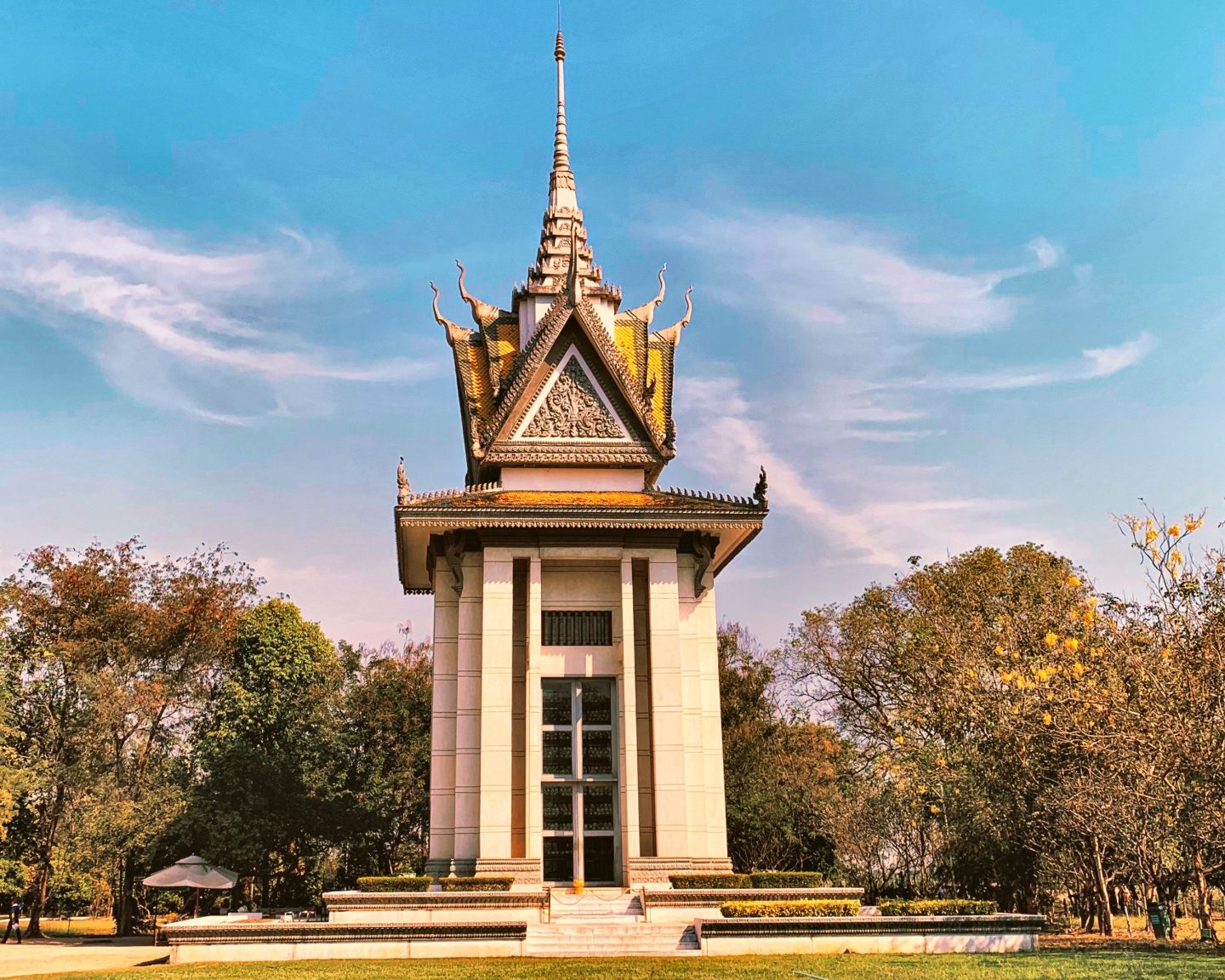 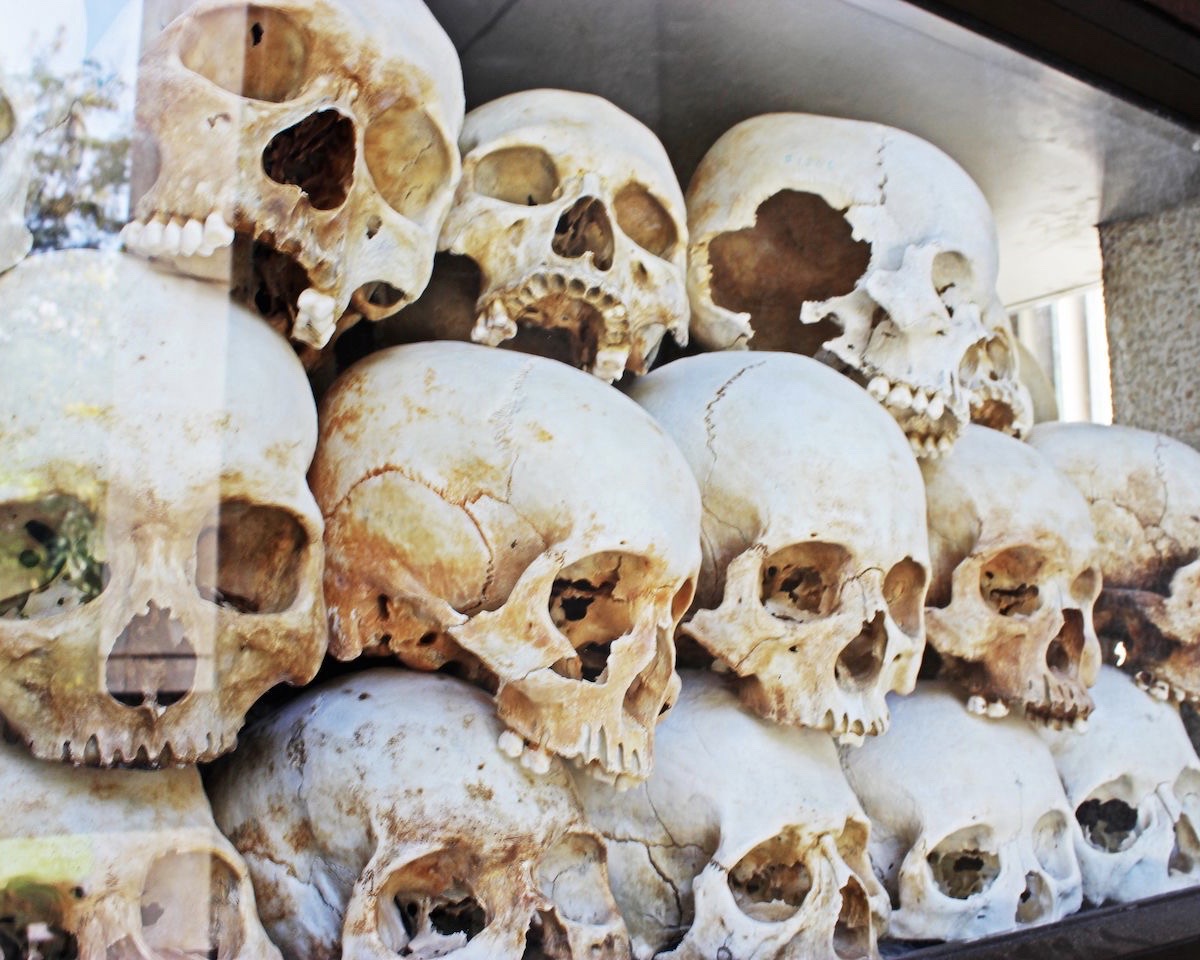 Tuol Sleng Museum is open from 8 am – 5 pm and the entrance fee is 5 USD, plus 3 USD for the audio guide. You can get to the museum by tuk-tuk from Phnom Penh or maybe on foot depending on where you are staying in the city.

The Killing Fields of Choeung Ek are open from 8 am – 5.30 pm and the entrance fee is 6 USD. This price includes the audio guide. You can get here by tuk-tuk from the Tuol Sleng Museum (45 minutes). 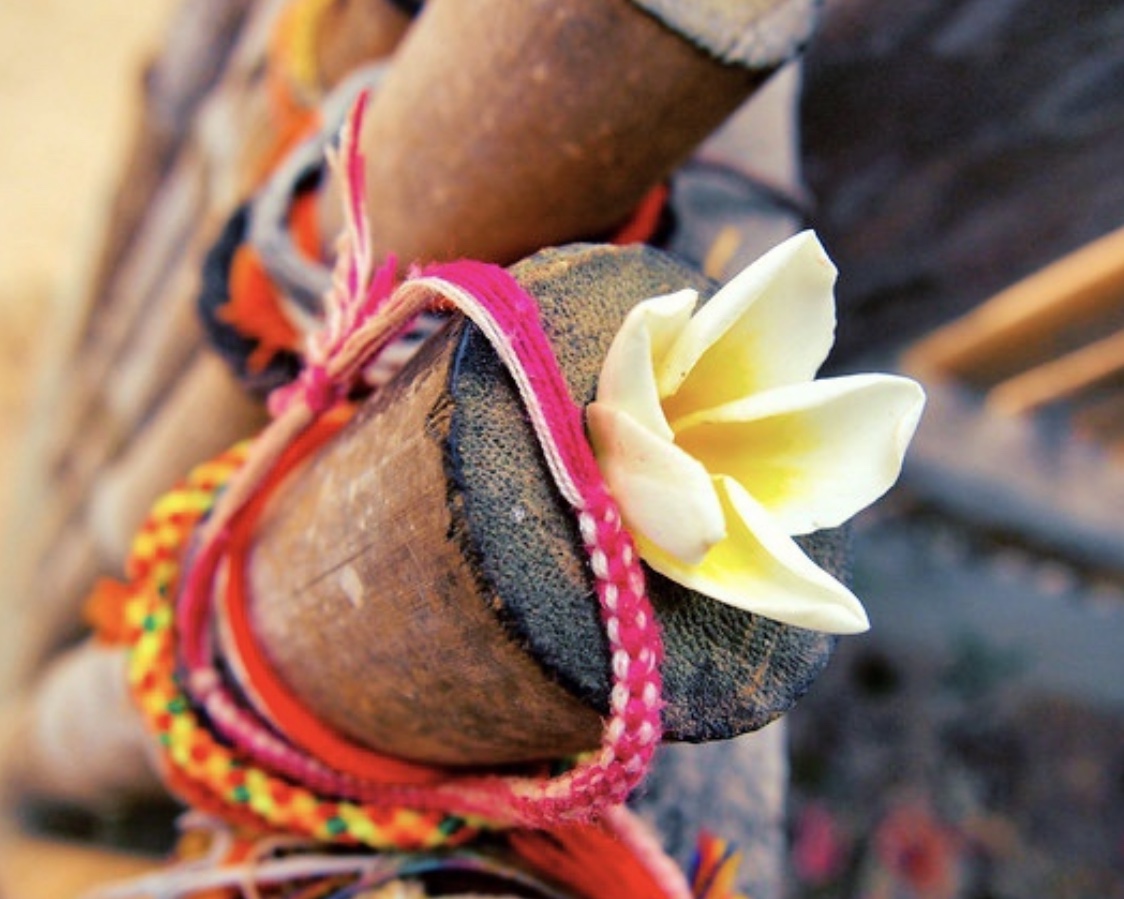 Throughout Cambodia, there are at least 343 of these “killing fields”. Some were actual fields. Others were caves or river banks.

Visiting the Killing Fields of Choeung Ek and the Tuol Sleng Museum really broke our hearts into a million pieces. We believe it is very important to learn about these events, so we don’t forget and make the same mistakes again. We don’t think it would be possible to understand Cambodia and it’s people without knowing about their recent history, no matter how harsh it is, so everyone should visit the Killing Fields and the Tuol Sleng Museum when in Cambodia.